There seems to be a certain nostalgia with videogames these days. Perhaps it’s the result of developers growing with people that have become the core videogame audience, or perhaps a search for the next comic book franchise; either way it seems that the domain of a growing nerd populace in the 90s has become relevant again. Which brings us to Deadpool, a smart-assed anti-hero somewhere on the cusp of his own cinema treatment.

Deadpool (the videogame), by and large, is designed to impress the fanbase -- rife with trash talk, sexual innuendo, blatant sexual references and cameo after cameo. The execution is rolled up in a clever idea that Deadpool has been written into a videogame and must jump through the hoops in any and every manner deemed appropriate. Or put another way, you must push yourself through poorly conceived levels, with no real overarching story because the premise of the game is for you to do so. It's like an SNL skit; amusing at first but goes on way too long. 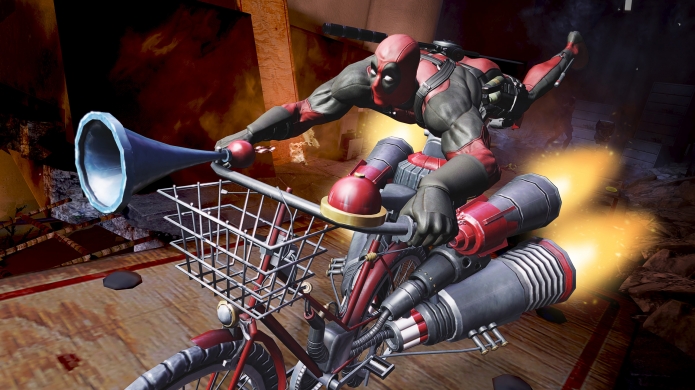 Starting the game in Deadpool’s run-down apartment, players are introduced to the inner-workings of Deadpool’s mind; crazy and sex-obsessed. After establishing that Deadpool must move through a game written by High Moon in order to be in his own game, you’re whisked away to perform a hit on a media mogul. It’s not long before the waves of enemies and repetitive backdrops start to wear down your resolve for hitting jump, combinations of X and Y and using Deapool’s teleport ability to dodge attacks.

Overall, the combat system contains very little in the way of flair. Earning points to spend on new combos you can also upgrade both your swords and pistols, buy new grenade types and increase Deadpool’s attributes. None of these features affect the way you play the game and unless you find mastering new combos intrinsically rewarding, there is no magical carrot enticing you to upgrade.

In fact, there is not much of any type of carrot in the game. The story is driven for its own sake and the funnel-like environments must be negotiated simply because there may be light at the end of the proverbial tunnel -- at least when you’re not being a gopher. It’s more of a wet newspaper approach to keep you going -- getting hit doesn’t so much as hurt, it’s just annoying and the more you put up with it the more annoying it becomes, until finally you decide you’ve had enough. It’s not that the game is technically flawed in any respect, the environments are nice enough but the constant flow of enemies proves the law of diminishing returns. Mini-bosses appear and require untold rounds of ammunition to conquer before, five-minutes later appearing in tandem.

The big hit is the handling of cameos. While a lot of characters come and go such as Vertigo, Psylocke, Rogue, Wolverine and Mr. Sinister, some get there own little introduction, a slick presentation that is both amusing, well-informed and a great homage to the character’s history. When Wolverine gets his intro goosebumps were definitely gotten as covers that have left an indelible image flash across the screen -- Adam Kubert and Barry Windsor Smith at their best.

Comic book characters, just as any work of literature, can be timeless. What Deadpool fails to acknowledge is that he does not fall in this category. While the likes of X-Men and Hulk have served, at times, as allegories, there is just too much toilet-driven humour in Deadpool to come off as anything more than droll shtick.
Latest Comments
Link