If you wanted to get all deep about it, you could argue that Dead Rising 3 is an interactive extension of this new console generation’s launch period. It’s all a bit rough around the edges and, setting the tone, the outlook for all involved is a bit bleak right now. But that leaves next-gen punters as either mindless zombies grasping uncontrollably for something they don’t really understand because their delicious brains have been programmed that way, or they’re the hapless Nick Ramos -- a mechanic with a big heart who just wants to see everyone make it through to the end. Whichever way you look at it, we’ll be jumping hoops like both stars of Dead Rising 3, until the dust settles and the next-gen ball is rolling nice and smooth.

Unfortunately Dead Rising 3 is anything but a smooth ride. It’s the least technically complete game at either machine’s launch, but hot-damn is it fun. If you can move past the less-than-stellar visuals, the drops in performance here and there, the issues with voice-commands and controller movements or the inconsistent (and often unusable) companion app, there’s a very enjoyable game here.

In fact, among most of the titles available at launch, I played more of Dead Rising 3 than just about anything else. 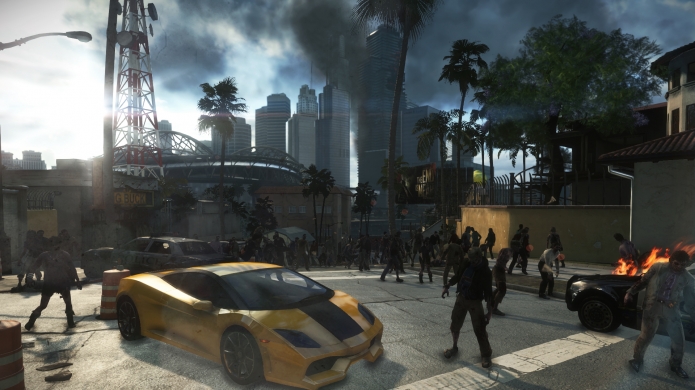 While previous iterations of the game have given you relatively open sandbox arenas to play around in, Dead Rising 3 gives you a cordoned off city complete with suburbs, linking freeways, a subway line and even underground maintenance areas. It’s by far the most open game in the series yet and what separates this from other open-world games is its clever use of interiors, item collection and the ever-lurching obstacles that make exploring and collecting so edge-of-your seat. There’s also that shadowy timer ever-reminding you that at some point you’re going to be part of a final solution, which adds to the overall tension of the game. And while it’s definitely present in Dead Rising 3, it’s the gameplay variations and options that really sets this entry in the series apart.

In fact, Dead Rising 3 is probably the most replayable game at launch for either machine (excluding Forza 5 because… racing cars). From the outset you have the option to enjoy the game as series-creator Inafune-san always intended -- overbearing, challenging, creepy, fast and impossible to 100% on a single playthrough. Or you can take advantage of what new series-curator, Capcom Vancouver, has realised about one aspect of the successful Dead Rising formula by way of completionism, and play a game-mode built specifically around that, replete with that all-important death clock. You can also play the game in drop-in, drop-out co-op or simply enjoy a single-player experience where no one infiltrates your game. The team has offered up a number of modes to cater to all kinds of players too, from hardcore to casual and others in between.

It becomes a real disappointment then, that the technical shortcomings of Dead Rising 3 keep it from being a balanced and consistent experience, because its gameplay goals are lofty and engaging across the board. It’s not a complete letdown though -- hundreds of zombies fill the screen at various times and places, and the traversal methods employed to get around the rather large environment are always messy fun. The utilisation of the later-added combination weapons system is brought to its fullest potential in Dead Rising 3, with vehicles also coming along for the creative death-dealing ride. 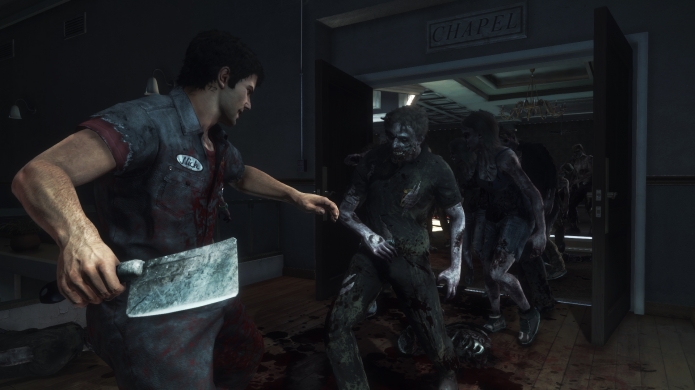 The game is made more fun through the contextual skills of our main protagonist, Nick Ramos, who is a mechanic by trade. As you skill him up through attribute points earnt via PP, he’ll be able to create weapons on-the-fly using either exact recipe items, or an item from a specific category. The same applies to vehicles, though these only ever require two vehicle types to craft your monstrosity. I ended up favouring one of the first hybrid vehicles you make called RollerHawg which is basically a motorcycle and a steamroller, rolled into one. It mows through zombies with ease and has a decent speed, and can even support another person either from a co-op game, or a survivor who’s decided to join your live long and prosper cause.

While zombies are a huge roadblock in your quest for freedom, you can utilise a lot of the city’s destruction and decay to your safe advantage. On top of finding lots of hidden items and small tales of environmental tragedy, rooftops and static vehicles help you find decent lines through the game’s myriad locales. For the most part, this is a city like you’d expect, complete with an upper-class and lower-class region. In the wake a zombie takeover though, class hardly matters, but it does mean certain areas are more locked down than others, or harbour more exotic items for you to collect.

From a narrative perspective, Nick’s job is almost a flimsy tie-in to the amount of fetching you need to do. He’s also not really a badass like Chuck was, so it’s often difficult to really believe he’s capable of a lot of the violent things he does, but it’s part of the overall direction of the game, which is as tongue-in-cheek as always. Capcom Vancouver talked at length prior to the game’s release about Dead Rising 3 being darker and zombies being more of a threat but in all honesty, I just don’t see it. Zombies are a threat because they’re out in greater force, and the darker tone is almost cosmetic given the overcast and bleak colour of the skyline. Beyond that, though, what you get here is familiar territory -- zombies are toys and humans -- sorry, psychopaths -- are the real monster. 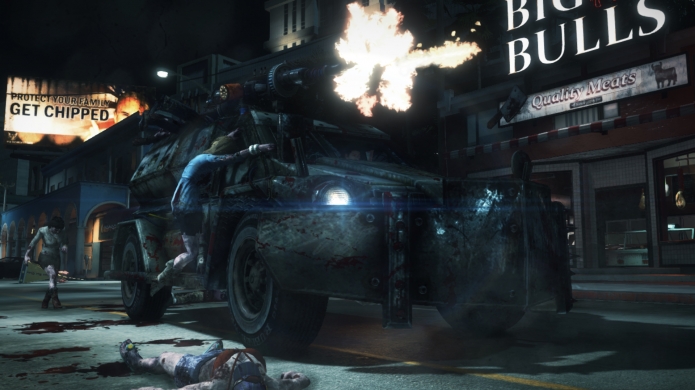 Depending on your stance on previous outings here, and Capcom’s general Japanese-centric spin on all things horror and zombie, Capcom Vancouver has done a bang-up job maintaining the series’ overall tone. You can definitely see a certain amount of Western influence creeping its way into the franchise, but it’s not at the cost of what’s made Dead Rising so unique to begin with. And, as mentioned earlier, the game’s curfew-style approach to completing ‘levels’ has remained relatively intact, and how you decide to approach the peripheral world missions over the game’s linear story ones is entirely up to you -- just remember the clock is always ticking.

New to the series, and games of this generation in general, is the companion app. In Dead Rising 3 it’s a wonderful contextual treat that sets itself up as your own in-game smartphone complete with Dead Rising-specific world apps such as a ZDC News Feed, a real-time map and more. As a game built around collectables and item combination, as well as emergent game-world events, the companion app offers up a sort of meta game experience with its own built-in narrative and ever-expanding side missions. These become important because they serve up otherwise locked-off parts of the game-world for you to utilise, such as item stashes and caches, or even shuttered apartments and houses. You can even call in aerial strikes.

When it’s working, it’s one of the most engaging ways to get the absolute most out of your game, unfortunately it working is a problematic experience at best. More often than not you’ll get the app to fire up, but then it’ll hang with a home-screen button that’s unusable. The only workaround I discovered was to start the actual Dead Rising 3 game app on the Xbox One dashboard via SmartGlass. Even after doing this, however, you’re not guaranteed a smooth run, but if you get one, milk the system for all its worth. 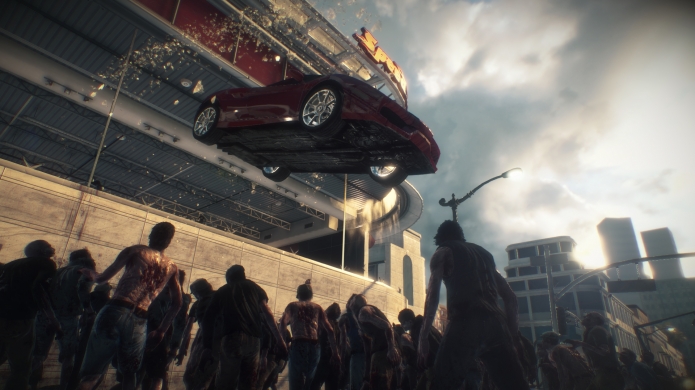 At the time of writing this review, I’d clocked up a huge amount of time in Completionist mode but got greedy and left my endgame content with just an hour in-game time. It turns out that’s simply not enough, so I was awarded Ending F, meaning there’s at least five other endings you can obtain in your experience. I’m also determined to jump back in and not dawdle my way through the first half of the game, and actually get out there and get shit done. It does help that I now know of a particular weapon you can use to level up and a ridiculous speed, but I’ll only do this to maximise my experience. The sheer fact I’ve invested so much in a relatively broken game on a handful of levels though, should speak volumes about the fun-factor involved here.

From a technical standpoint, Dead Rising 3 is not the pinnacle of how a next-gen game should look (or perform), but from an expanded gameplay perspective, and one of pure fun, it’s my favourite launch title among the lot. Hopefully we see a patch or two over the coming weeks to attempt to fix some of the mechanical problems with the game.