Playing Dead Island: Riptide is like trying to swim in a giant vat of molasses. It’s impossible to come up for air. Cloying zombie waves stick to you, dragging you down and turning the entire activity into a worthless battle of attrition. Why bother to engage zombies when there are thousands more to come and they automatically match your level anyway? What’s the point of death when you simply wait for six seconds before returning to where you were, only this time with a slightly less effective weapon and the ominous knowledge that you’ve got another fifteen hours of this crap to wade through? Scrounging for money is hardly worthwhile when your death penalty is tied to a percentage. The design systems are far too transparent.

It took me ten minutes to return to the ambivalent state I had reached towards the end of Dead Island. The realisation that I could simply sprint past zombies in that game, even if almost impossible at times, given their intense population, almost turned it into a game of cat and mouse – catch me if you can! Except it’s not how the game wants you to play. It wants you to churn through wave after wave. It wants you to chew through weapons and level up and collect useless junk so that you can feel marginally powerful for about ten minutes before the next wave of more powerful zombies. It wants you to grind, grind, grind. And I’m sorry, but I’m over that.

You know something is wrong when a friend comes over and initially says, “Hey, this looks pretty cool,” and then five minutes later, “Man, this is shit”. Dead Island: Riptide is just that – beautified shit. It looks great at times, given the tropical island setting and quite decent engine, especially on PC. But eye candy can’t hide the stink. There’s a disconcerting level of dissonance in Riptide. The story, such as it is, matters very little. You’ll end up skipping the awful, Australian-accent-ridden dialogue very quickly. Just show me the next waypoint, that’s all the game cares about anyway.

Everything about Riptide feels shoddy. You’ll finish mission objectives and still be overwhelmed by zombies when the game will suddenly let a cut scene kick in showing everything hunky-dory, the area completely clear. During linear missions, you’ll spot zombies in the distance seemingly frozen in time, their programmed stance paused until you reach a suitable distance, whereupon they’ll snap into action. Weapons degrade far too quickly and cost ridiculous amounts to repair. Combine all this with the frankly ludicrous amount of enemies you need to swim through, and the game becomes so much of a chore that any concept of fun gets eaten up by overwhelming frustration.

Double this frustration if you enjoy tackling games alone, as there is no compromise made for solo players. It is incredibly difficult, to the point where you’ll regularly spend twenty minutes wailing on a boss zombie just to chip away a little bit more health. Maybe you’re simply meant to play co-op mode, where the amount of fun you have relates to the dynamic of your regular gaming tribe. 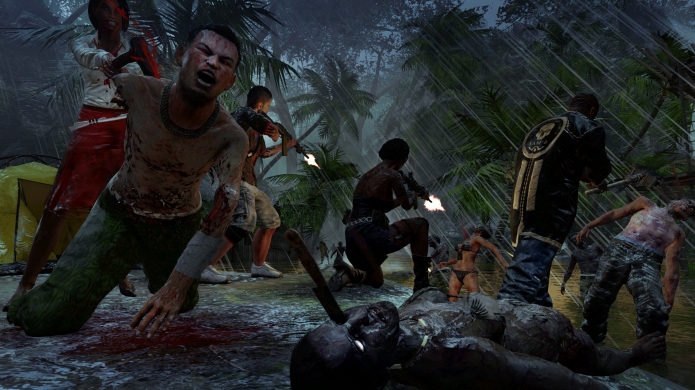 The PC version was reportedly broken with respect to its online capabilities for a few days after launch, but we found that it regularly prompted us to join nearby players and connected quite easily, matching us up with players at a similar point in the story. There’s no guarantee that these companions will do anything other that stuff around, though, as we found to be the case in the majority of random connects. Other PC-specific lock-ups, particularly during the splash menus, were experienced a couple of times but settled down after a force quit.

Riptide brings absolutely nothing new to the experience of the first game. If anything, it just piles on new frustrations. Boats are annoying to use and the new water enemies love to run at you and jump on. You’ll die countless times, too, as you wait for the unavoidable boat-sitting animation. It may look deadly beautiful but it is not worth your time. This is practically the exact same experience as the first game. Are we so blinded by the zombie zeitgeist that we can’t see the gameplay for the detachable limbs? As Telltale’s The Walking Dead showed, you can use zombies in an interesting manner, interspersing them within a broader narrative. Riptide is just stupid zombie spam all the time, which is getting old real fast.
Follow Us
Latest Reviews
More...
News Feed
Advertisement
Latest Threads
Log In
Create Account | Lost your password?