Daytooooooonaaaaa. Who hasn’t, or hadn’t, walked past an arcade in the 90s, hearing that siren’s call of driving goodness calling out to them? The game that invented the cross-unit play is still sitting pretty in most of the dying amusement slots outside movie theatres and beer gardens, begging those with a bit of nostalgia (or inebriation) to sit down for just one more race.

SEGA, who in the past six years have remade and relaunched the large bulk of their golden years, have finally dropped their arcade perfect crowd pleaser onto the XBLA and PSN. Boot up the download and moments later, you could be back in that TimeZone in 1995, blocky red and blue NASCARs rolling down the track to the epic theme song we all know and love.

Along with the obligatory arcade mode, there’s online multiplayer, a completely strange Karaoke mode and “survival”, which is obviously trying to emulate the endlessly boring experience of real life NASCAR. Sadly, none of these modes outside of the Arcade are worth playing – Karaoke simply removes the words of the game’s music and puts them on screen so you can sing along. Seriously. It also never ends. 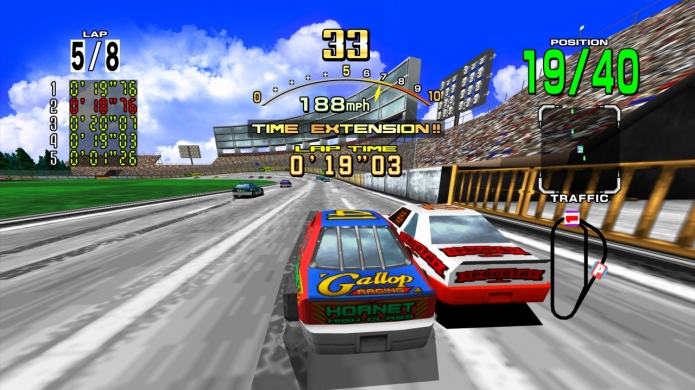 The highlight of Daytona is easily the Arcade mode, which is probably one of the most arcade-perfect conversions I’ve had the pleasure to play. Everything is perfect – from the announcer proclaiming that you need to start your engine, to the texture pop-in of the slick streaked track as it rolls out in front of you. The three tracks (Beginner, Intermediate and Expert) are all there and unchanged, along with the Automatic and Manual variants of your vehicle.

Basically, it’s the closest thing to an arcade clone outside of having the entire three-seat set in your living room. But the dedication to that same conformity is also what makes Daytona USA such a hollow experience. This game was never designed to be played with a controller on your flat screen. After a few laps on the first track, memories of why you played this game in the first place will return and the solo experience on the couch will just become meaningless.

Arcade racers are devoid of any sort of longevity or detail to their play styles because they are designed for 5-10 minutes of fun. Doing an eight-lap circuit in the same car to the same music is only entertaining when two of your mates are yelling at and ramming you off the track. Even over a multiplayer session, it’s just not the same. Sure, you could jerry rig a couple of racing seats together, but where are the dodgy bumper car pedals and the ripped leather bucket seats?

It’s unfair to lambast the game for these complaints, because the title is well made and it’s a decent homage to one of the arcade racing greats. But I struggled to find a point to its existence outside of a Museum exhibit dedicated to gaming past. There simply isn’t enough here to hold your interest outside a good half-hour, unless you’re desperate to top the leaderboards for time trials or get your kicks belting out the soundtrack.

Daytona USA sits in the unique position where it suffers not from its faults, but from the perfection of its original design. There was nothing better than being enveloped in those speaker laden seats, inches away from a ridiculously bright CRT screen, friends or strangers seated either side of you. Modifying that experience strips back almost everything that made the game unique or entertaining, instead leaving you with a pretty archaic racer with zero longevity and a non-existent online player base.