I made an unintended gaff when newsing a gameplay video for Darksiders Genesis ahead of gaining review code. Given the artstyle and new isometric presentation, I lightly joked that if you “can’t wait for Diablo 4”, Darksiders Genesis would “have you covered”. I was wrong. Not on the front of this game holding you over until Diablo 4 -- any game can really hold you over, rather it was that I assumed the series had gone down the action-RPG route of Blizzard’s darkest IP. The truth is, while action-RPG lite, Darksiders Genesis is simply, Darksiders. If you’ve played the original, its sequel (starring Death) or the flawed third (starring Fury), Genesis is going to be an easy sell. And what’s crazy about that is with all the control and gameplay trimmings pulled literally from the third-person entries, in this new presentation, it all still works. And it’s excellent.

So your expectation should be action-adventure in the old-school isometric videogame view with cut-scenes akin to Battle Chasers: Night War and, if you’ve never played that, you should. The point here though is, the meat of the game is action, traversal/platforming and a lite upgrade system. Literal moves you performed as War in the original game are transferred to perfection here -- Darksiders Genesis is simply Honey I Shrunk the Horseman, but that’s okay.

"Like, it’s not his or her fault an invisible bear/demon trap trapped them. Still, I did stab or shoot..."


Where problems rear their demonic heads is in camera woes. It’s not dynamic, and the environmental art is grand -- pillars, arches, buildings, massive boulders… mountains -- all of it fleshes out the world, but the fixed camera means when you move behind any one of these your current character -- War or Strife -- simply displays as an outlined X-Ray avatar. But if there are enemies in the same vicinity, you don’t see them. You can get lost, attacked or worse, just fall off a ledge. It’s not ideal, and admittedly doesn’t happen overly often, but it is frustrating when it does rear its hidden head. 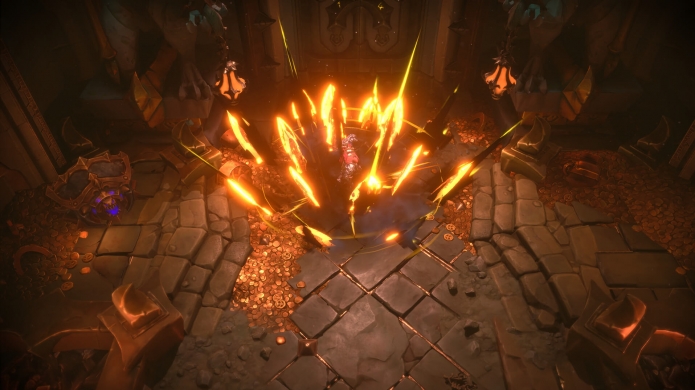 Characters can also get stuck in the environment. It’s not an always situation, and as is the case with review code, there’s likely updates in the pipeline to address these, but if you’re in the thick of it, it can be annoying. And, problematically, this also happens with enemies. Numerous times I’d find the lowest-level enemy just kind of running on an invisible treadmill waiting to be stabbed or shot, and that kind of made me sad. Like, it’s not his or her fault an invisible bear/demon trap trapped them. Still, I did stab or shoot.

"What I love about their Buddy Cop relationship is that it’s part of a larger permeation of creative writing across what might be the most “on a string” ongoing franchise in gaming history..."


But as far as negatives go, the above is about it. The game is playable both cooperatively or in single-player, with the latter allowing you to switch characters on-the-fly which is invigorating beyond description. In fact, magic, attacks and finishers aside, it’s my most-liked part of the full experience. Moreover, War and Strife couldn’t be more different. What I love about their Buddy Cop relationship is that it’s part of a larger permeation of creative writing across what might be the most “on a string” ongoing franchise in gaming history. If Darksiders had a Tinder or Grindr profile, the publisher left swipes would be an embarrassing LinkedIn hirable negative.

Jokes. You get jokes. 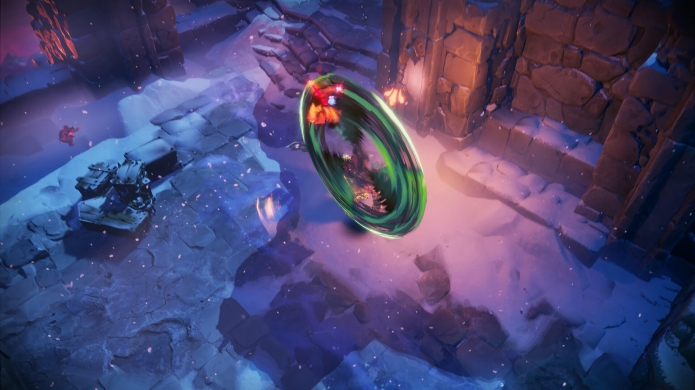 Truthfully, the tenacity of the now disparate studios in both Airship Syndicate and Gunfire Games should not be overlooked, or underestimated. This series has been in *ahem* strife for a long time, but appears to have emerged through the gates of hell all the better for the experience. Which brings me back to Genesis’ writing, which is equal parts cheesy and downright cool. It’s easy to forget that this is a universe created from the mind of a comic book legend in Joe Madureira and as such it has shortform storytelling at its heart, but it’s snappy and fun. Voice-acting is great too with Liam O’Brian reprising his staunch take-no-guff role as War, while Strife’s portrayal by Chris Jai Alex offsets any seriousness with quips, jokes and stupidity -- in a good way.

"War is your classic tank; melee is his jam, while Strife works more successfully in crowd control..."


Obviously action is the meat and potatoes here, and it doesn’t fail to deliver. As mentioned above, if you’ve played a Darksiders before (particularly the original game) you’ll oddly know what to expect, despite the forced isometric world. How it elevates the original though is in the complementary differentials between War and Strife. War is your classic tank; melee is his jam, while Strife works more successfully in crowd control. And when you manage them on-the-fly in the thick of it, it’s just super-satisfying. Airship has also meticulously crafted playspaces full of puzzles that range from climbing, to combat to mechanical thinking. It’s always engaging in this way, while the collectible nature of the series on the whole also stands tall in Genesis. There’s your economy which is tied to souls, and Vulgrum naturally rears his fiendish in this space once more. But there are new characters as well, and a bolstered upgrade system that I honestly don’t want to spoil.

As an end-of-year release, and one that looks stunning on PC at the moment, the desktop jockeys out there have a leg up on the poor console saps waiting for the game to drop on all three platforms in February. There’s no doubt it’s going to look amazing on large 4K HDR screens (which will give me another reason to fire it back up in 2020 for a bit of couch co-op on my Samsung 65” Q9 4K beast. But on my Alienware m17 Gaming Laptop running at 1080p, it still looks pretty damn good. And my hat is off to the art team at Airship for making a game this colourful and dark. It’s as if Diablo and The Legend of Zelda had a baby -- a sentence that should excite every gamer.

Darksiders Genesis is a fantastic new direction for the series, and while I love the third-person 3D entries, I’d be fine with the Genesis blueprint running the show moving forwards. This is one of my favourite games I’ve played this year. Put it on your Festivus wishlist, if you haven’t picked it up yet.