In my review notes for Darksiders II I have an entry stating that “Death is a douche”. It’s by no means a slant on the game, or its main character, rather it’s an apt description for a protagonist whose very ‘job’ is handling death. He takes no guff from any of the game’s NPCs and unceremoniously digs at their constant need for his help. Like so many Legend of Zelda games, and even Darksiders before it, Darksiders II sends players on countless quests and tasks, all borne from the woes of incompetent or lazy characters throughout the ginormous game-world Vigil has crafted here. But again that’s not to be taken as a slant on the game.

Much like the first game, Darksiders II is a title filled with homage and not-so-subtle nods to some of the top games in the industry. A line from my review of the first game suggests that “we're finally at the design mercy of a team on the same page as the rest of the hardcore gaming community”, but it seems more apt to have that line applied here.

Diablo, The Legend of Zelda, Metroid, Tactics Ogre and more can all be name-dropped when talking about Darksiders II, which borrows heavily from them and others, but once again it’s all done in such a way that it never feels heavy-handed or obvious (well, the Diablo stuff is slightly obvious). This is because there’s a deep and rich universe here for the exploring, and while the first game did a bang-up job with its narrative foundation, Darksiders II is almost overwhelmingly deep in its delivery.

Death begins his journey on an epic crusade to erase the crime his brother, War, is being charged with: breaking the seals and unleashing the apocalypse on humanity. His goal is to restore life to the human race, ergo erasing War’s very crime. From the outset the game’s story is vast and multi-layered, never once dumbing its purpose down for the player. While War’s journey was easy to navigate on account of its setting, Death travels to multiple realms, each richly detailed in lore and history. All this has given the Vigil art department a lot to play with and you’re never bored of what the game dishes out on a visual level, even if the team’s engine is beginning to look a bit dated.

As promised in the game’s lead-up, Death’s trusty stead, Despair, is readily available to you at the press of a button (or two) right from the start, and is something of a necessity given the size of some of the areas you’ll visit. But the real genius comes in the fact you’ll actually be dabbling in a host of dungeons very early on in the piece, and while they’re not the full experience, it’s an inviting and rewarding way to begin your adventure. The game’s pacing is handled with aplomb, and I never once felt like my hand was being held. Turning the difficulty up to Apocalyptic and switching off Tutorial notes leaves the experience just that - a challenging and engaging foray into a world of acrobatic platforming, challenging puzzles and visceral combat. 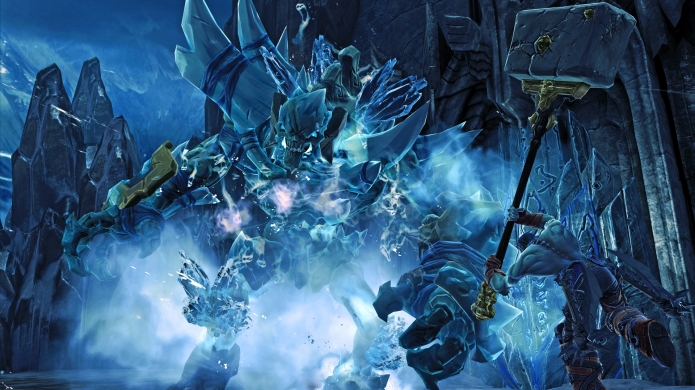 As more of an open-world affair than its predecessor, DSII offers deeper engagement with the game-world’s myriad denizens, including conversation options designed to not only give you more information on the world around you, but to also offer you new side-quests. Again, the delivery of this system alone is balanced brilliantly, and I found myself seeking out characters just to try and learn more about Vigil’s universe. Other RPG components come in combat and loot drops, as well as a completely realised character progressions system replete with an abilities tree (split into Necromancer and Harbinger). You’ll earn skill points to spend each time you gain in level, and there’s also the option to completely respec your set-up if you’re interested in exploring different abilities.

Death’s main weapons are his dual scythes, but you’ll also earn a secondary weapon (either slow or fast) such as hammers, swords or claws. He’ll also eventually be rewarded with his brother, Strife’s, pistol and a ghostly hookshot. As you’d expect, with each tier you’ll be able to explore the world more and reach previously locked-out areas. It’s classic Zelda/Metroid in design, but again, delivered in Vigil fashion.

Loot is easily the biggest differentiator though, and like its borrowed foundation, comes in basic weapon and armour drops, as well as more specialised pieces ranging from Rare, Elite, Possessed and Legendary. Possessed weapons can be fed other items to level up and unlock new buffs and stats. You can also equip Death with Talismans, each of which offers something new and unique, such as combat enhancements, the ability to seek out hidden and rare loot and much more. You’ll also be able to visit serpent statues to trade items with other players on your platform of choice by gifting items and gear to them. NPCs will also send you gear via these trading posts, making them an integral part of the game.

Beyond item drops, you’ll also find gold which is used as a basic currency with Merchants, but there are other items throughout the game-world that can also be used to purchase goods (such as Vulgrim’s Book of the Dead pages) or earn new rewards. The whole currency and items system is incredibly deep, and dwarfs plenty of dedicated RPGs out there as it is, but still feels natural and warranted in Darksiders II, adding to the aforementioned game balance.

Combat is still as rewarding as it was in the first game, and there are now arenas you can compete in to earn Rare items (where enemies come in waves). Enemy-types vary depending on your location and most bridging sections of the game feature respawned baddies, but thanks to the game’s lack of level scaling, the stronger you get, the easier they become to deal with. It also means you can’t really grind to level Death up in the early throes of the game. You can purchase new combat skills from Thane, one of the old Makers, early on, but as you progress you’ll unlock more and more abilities, and like so much else in the game, combat is tight and incredibly well-balanced, leaving it thoroughly visceral and absolutely engaging.

Like the first Darksiders, Death will also be able to transform into his Reaper form for a short amount of time, and you’ll earn Reaper meter points for successful combat executions. You also obviously have a Health bar, alongside a Wrath meter which is used to perform special moves (purchased via skill points), and some of these can actually be used to recoup health, wrath or reaper points. It’s a thorough system and the options on-hand allow for a diverse approach to combat, giving players plenty of recourse to fight battles the way they want to. Couple this with the option to respec, and you have an insanely rewarding skirmish system in what is among the best encountered in the action-RPG space. 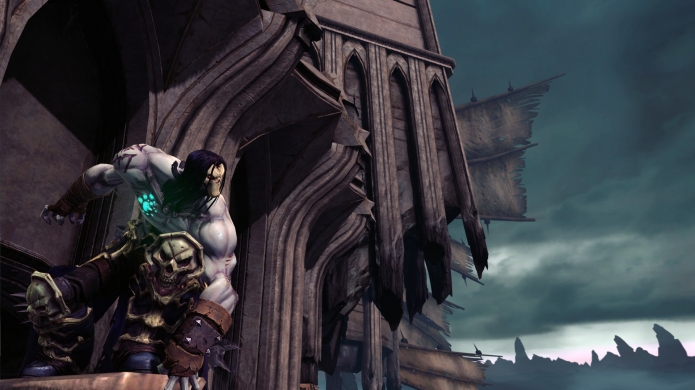 Taking all of the aforementioned into account, it’s difficult to fault the game. On a visual level, as mentioned, the engine is looking a bit tired, and it’s hard not to notice things like lazy texturing or pop-up, but it’s honestly nothing that breaks the game, or the experience. By and large, the art-direction overshadows any technical shortcomings found, and the stunning set-pieces you’re constantly coming into visual contact with are breathtaking in vision and scope.

All of this simply leaves me with a serious hope that THQ can find their footing and maintain as a company, just so we can continue to see, and play, games of this nature. Darksiders II is a game built around throwback mechanics and exploration, but done in a modern and narrative fulfilling way. It absolutely trumps the first game, which in itself was a work of masterful art, and leaves me hoping we don’t have to wait two years for the inevitable third game. One of the year’s best releases by far.