When it comes to role-playing games or RPGs seen throughout the years, it’s safe to say that there’s been a notable difference in how games developed in Japan looked and played versus those that were developed in the U.S. - or some other country considered Western. Think Final Fantasy and Dragon’s Quest from the 16-bit and 32-bit eras versus Fallout 2 or something like Neverwinter Nights on PC. The same can be said of mech titles, when viewed as a genre.

In no way does this difference simply come down to the use of an anime-inspired Gundam visual aesthetic.

With MechWarrior 2, released for the PC in 1995, you were put into the role of piloting a huge robotic mech. One that took time to move and turn, and one that would also overheat if you fired off too many rounds of your right-arm mounted laser cannon. Going so far as to fully shut-down your entire mech for a minute or so to cool down all that soon-to-be crispy circuitry. Customisation was deep and factoring in stuff like movement and ammunition and armour all played a role in mission success.

The flip side to this is FromSoftware’s Armored Core series, which offered up equally deep customisation options for your mech but with action taking on the form of short rounds of “flying robots with giants guns doing their thing”. Also, pilots were treated as individual characters – the cast of a hypothetical series - whose personas shone through and could be seen within each rivet and metallic plate of the mechs they flew. Daemon X Machina, developed by Japanese studio Marvelous Inc. with Armored Core’s Kenichiro Tsukuda in tow, falls into this category.

“Daemon X Machina goes that extra robo-mile, with one of the best player creation tools we’ve seen in a long while.”


Robust, deep, and rewarding mech customisation with short-burst missions made up of fast-paced action. The sort of stuff that can initially feel like a simplified shooting gallery, but soon opens to take full advantage of all those newly salvaged missile launchers, armour pieces, and speedier robo-legs. Pilots, these being those you fly with and your own player avatar, share the stage with their mechanised counterparts. And on that front Daemon X Machina goes that extra robo-mile, with one of the best player creation tools we’ve seen in a long while. So many wonderful hairstyle and facial options worthy of an RPG.

Missions, which can take two to four minutes to complete or double that depending on what you’re pitted against, are more arcade than they are simulation. This is of course by design; enemies drop extra ammunition and small blue containers once shot create little heal bubbles you can sit in to restore that big mech energy. Flying around is quick and easy, stamina and charging and reloading take a few seconds at most. Locking onto enemies works across missiles and assault rifles and is automatic so you don’t need to be a dual-analogue master and can focus more effort on flying, dodging, and your mech’s air-presence and air-positioning.

Plus, there are the pre-requisite giant sword battles.

The overall structure or setup of Daemon X Machina is that you’re a mercenary, and these missions take place in order - according to rank. As you work your way up, meeting and discussing matters with new characters whilst trying to make sense of the somewhat confusing tale about rogue AI, the missions being to get more involved with the option to tackle certain encounters in multiplayer co-op. There are even set-pieces where you leave your mech and go out on-foot – and for that there’s an equally deep skill tree system for your human side in the form of a cybernetic upgrade or two. Or ten.

The intro sets the tone in style as you see a moon crash into a planet for some reason. A world in chaos, survival a struggle. Time to mech.

Giant boss battles follow suit (or giant ship form) and stand out the thanks to them offering up challenging and varied combat that requires a fair bit of mech-xterity on behalf of the player. In terms of visuals, Daemon X Machina looks and moves wonderfully, with detailed mechs that change and evolve over time as you discover and create new loadouts. The music, being of the heavy rock and metal variety suits the aesthetic and the frenetic pace of each mission.

“Giant boss battles follow suit (or giant ship form) and stand out the thanks to them offering up challenging and varied combat that requires a fair bit of mech-xterity on behalf of the player.”


Where things ultimately begin to feel disjointed, comes with the surprisingly lengthy and often well-presented story. With missions being quick to complete, the briefings can often feel like they go on for longer than the time you then spend inside a giant mech flying around and shooting and swinging your giant sword. As the plot twists and turns and changes the arenas you fly and hover about in don’t follow suit, offering the same evocative backdrops with only minor interaction. This begins to take a toll after Mission 30 or so. And with the degree of player involvement all over the pace, where at their most basic missions don’t require more than for you to simply sit there and hover-shoot for a bit - Daemon X Machina’s appeal ultimately lies with how you feel about customising mech loadouts. 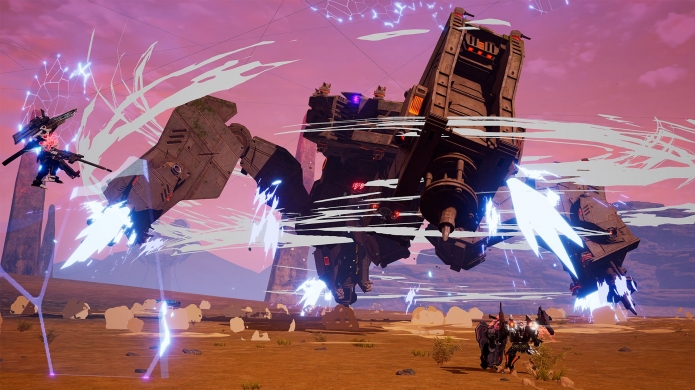 This side of the game is wonderful, and the ability to salvage parts from fallen mechs and use those to augment your own robotic symbiotic counterpart is a brilliant touch. As is the ability to purchase new weapons or research upgrades. Like your avatar’s customisation, changing the look of your mech is time well spent – especially when paired with the stylised and excellent visuals put to full use throughout the many real-time cut-scenes and the countless action-packed encounters. The only problem being that missions and mechanics only rarely rise up to this level.
Latest Comments
No comments currently exist. Be the first to comment!
Commenting has been locked for this item.
Follow Us
Latest Reviews
More...
News Feed
Advertisement
Latest Threads
Log In
Create Account | Lost your password?