Well, here we are. After years of intermittent looks, a few key delays, and a developer change or two – Crackdown 3 is finally out. Available on Xbox One and Windows 10 it comes in two parts, a single-player and co-op campaign that aims to recapture the spirit of the original. With the addition of Terry Crews. And, a multiplayer mode that utilises the Power of the Cloud to present an almost fully destructible map for players to go head-to-head in.

As to why this second mode, called Wrecking Zone, exists is anyone’s guess. As a multiplayer game it falls flat in the same way its unrealistic early-‘90s computer graphics buildings do. Without weight or context, the small map and lock-on targeting feels like a mini-game at best. More the realisation of a technical demo from years back; this weird addendum to Crackdown 3 is a curious distraction to the core campaign experience. Which thankfully, fares a lot better. Offering a simple and straight-forward setup that doesn’t so much change the original Crackdown formula as it adds environmental scope with impressive verticality. 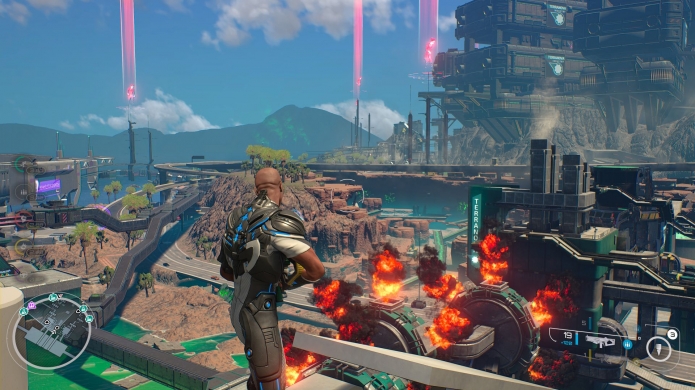 And the same explodey action.

However, no matter the many moments of fun to be had with the impressive size and scope of the environments to explore and explode within – there’s a disjointed feel to much of Crackdown 3. A feel that ultimately means it fails to reach the charming heights of the original.

Which might come down to the title’s long and oft-troubled development cycle. One that began with one of the creative leads of the original creating a software company called Cloudgine that would focus on cloud-based computing to increase a game’s rendering complexity. In the proposed Crackdown 3 this would mean city-wide destruction. Handling core development duties, Microsoft would then employ the services of two separate studios – one to handle the campaign and another multiplayer. This was in 2014.

In late 2017 Crackdown 3 was meant to launch alongside the release of the Xbox One X and showcase the potential of 4K gaming. So then, here in the year 2019 Crackdown 3’s campaign features none of the cloud-based destruction that might have originally been on the cards – instead we get an improved version of the rag-doll and object-based physics found in the 2007 original. The Xbox One X enhanced visuals are crisp and detailed, but nowhere near reference material. Performance is smooth and stable for the most part but played online the net code feels overly sensitive leading to stuttering and dropouts. Even with a 12-14ms ping. 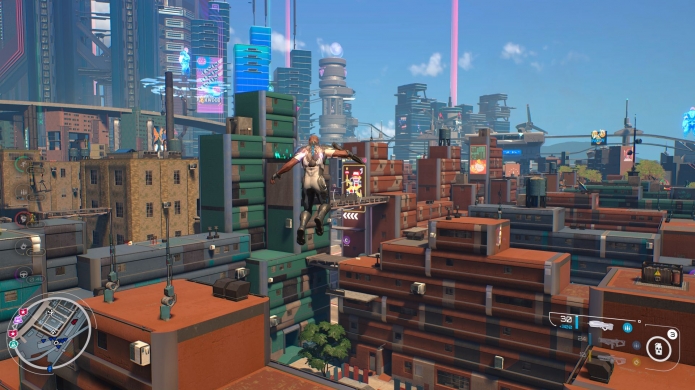 In terms of setup and structure though Crackdown 3 is very much Crackdown-classic. But this time with a quasi-futuristic tale of a city overrun by corporate control rather than gang violence. A future that also means technological progress. But even though the new city location of New Providence is full of large futuristic skyscrapers and excavators the size of most buildings – there’s a lot of empty space. Crackdown 3’s visual aesthetic might be cartoon shading, neon lights and animated signs, clean shiny surfaces, and geometric shapes of all sizes, a lot of it feels bland and uninspiring. This also applies to the story, which lacks character and charm. Relying instead on the appearance of Terry Crews and the odd entertaining bit of dialogue or animated comic sequence.

It’s a strange aesthetic truth be told. Sparsely populated, the signs of life both in the figurative and billboard sense appear just far enough from the previous ones as to give an overall sense that it’s all fake. Strangely though, this phenomenon mostly occurs in the early parts of the game, and the outskirts of the city. As the story progresses, and the further you delve, the geometric complexity and verticality increases exponentially. Which admittedly provides many impressive locations to jump around, collect orbs, and make things go boom. 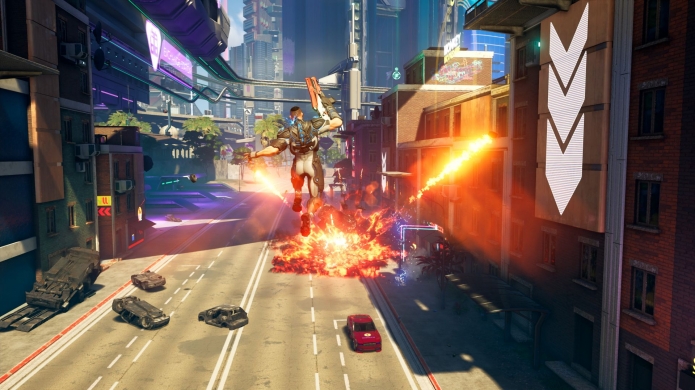 Progression, which mimics the original’s, once again comes down to collecting coloured orbs. The more glowing green Agility Orbs you collect the higher you can jump and the faster you can run. The more glowing blue orbs you get the more effective your weapons become. This time around, the higher the level the more weapons and skills you unlock – like being able to dash mid-air and perform triple jumps.

By the time all the tracked statistics reach their full capacity though, you’ll most likely be out of things to do. No more prisoners to free or chemical plants to destroy. Even as a sequence of shoot and blow up stuff events to unlock bosses that repeats, Crackdown 3 ends on a high-note. Especially when played co-operatively. Because this note comes in the form of the Singularity Grenade, obtained once your Explosives skill hits Level 5. A grenade that creates a vortex of suck to draw in enemies, co-op partners, and vehicles alike and then send them flying in a purple pyrotechnic display of explodey goodness. 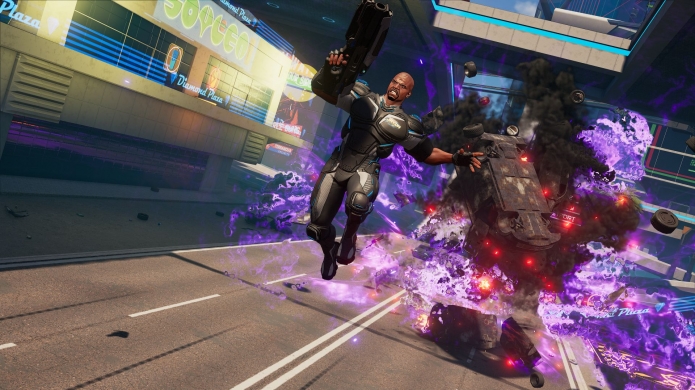 It’s the perfect weapon for a densely populated futuristic city to cause your own destruction and create some silly fun. Sadly, few locations in Crackdown 3 fit this profile.
Latest Comments
Commenting has been locked for this item.
Follow Us
Latest Reviews
More...
News Feed
Advertisement
Latest Threads
Log In
Create Account | Lost your password?