With a story likely to have been developed in a pub with a bunch of drunken mates, Crackdown 2 is essentially a tale of good guys vs bad guys. This is like watching a bad (and I use "bad" as a term of endearment) 80s action movie. Who cares about being overly original with an in-depth storyline when you can leap from rooftop to rooftop - superhero style - and blow shit up on an epic scale!

The premise is simple. You're a genetically engineered clone, developed by The Agency, an organisation in control of Pacific City - your playground for wanton destruction. Freaks, your generic human-turned-zombie-ish characters - created by some horrible new strain of the "Freak" virus - roam the streets at night, retreating to their underground lairs during the day. An anti-Agency "terrorist" organisation known as The Cell has risen in popularity and control strongholds scattered throughout the city and they're nott fans of The Agency. In fact, they may just despise them a little, and they definitely have an issue with you. Your presence creates a bit of a problem for these guys, being as you're stronger and more agile than the usual Agency recruits and all. So your job is to take over their strongholds, light up the experimental beacons to locate and destroy the freaks and... well, that's it. The rest of your time will be spent compulsively levelling up your stats and collecting stat orbs. 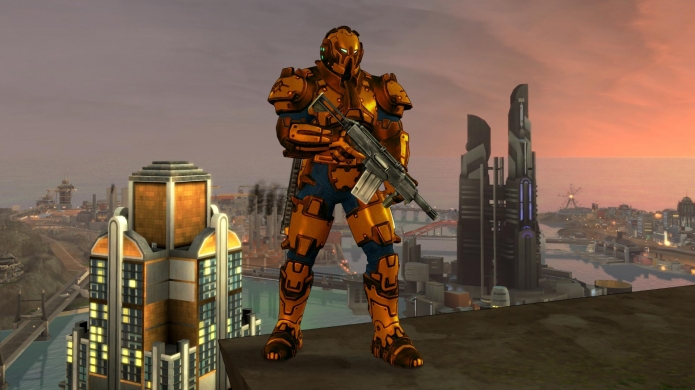 Stats are gained relatively quickly depending on your gameplay style. Use explosive weaponry and you'll level up your explosion skills. On the other hand, lazily drive everywhere and your much needed agility skills will suffer, ensuring your quick getaways will be anything but. Agility stats are gained by collecting agility orbs scattered on the rooftops of buildings and structures, promoting use of your engineered leaping abilities. I spent a lot of time in single-player searching these out, and there's a lot of pleasure to be had leaping from a tall building into a huge ground pound, blowing enemies in your radius away while creating an uber-crater beneath your feet. It gives an awesome feeling of truly being a superhero. Crackdowns decent draw-distance helps in this respect, being able to see the orbs in the distance promote you to explore, while hidden orbs are also scattered throughout, boosting all stats simultaneously. Injuring pedestrians or innocents, whilst devilishly fun, reduces your stats appropriately (it's worth it every now and then though, just to pick them up and throw them over the edge of a rooftop to watch them fall to their demise).

Of course there are plenty of cars driving around in all sandbox games, but rarely will you find yourself using them in Crackdown 2. Sure you can level up your driving stats, jump through rings in stunt jumps and do handbrake turns, eventually earning giant tank-like vehicles with massive UV weaponry, but the car mechanics leave little to be desired. Anyway, it doesn't really matter, cars are for The Cell and the frustrating Agency goons who love to get in your way, then proceed to open fire on you, because they singed their uniforms on your rocket explosion. You've got superhuman powers, cars are for amateurs.

Thankfully there are oodles of ledges, scaffolding and shattered bits of half demolished buildings to help you grab, hang and leap from to further your belief that you are indeed a superhuman clone. Falling too far will kill you but, meh. You're a clone after all, so The Agency will just launch one of your presumably 1000s of 'brothers' to replace you. At least it's a 'believable' reason for you to be respawning. Kind of ironic considering it is a videogame. 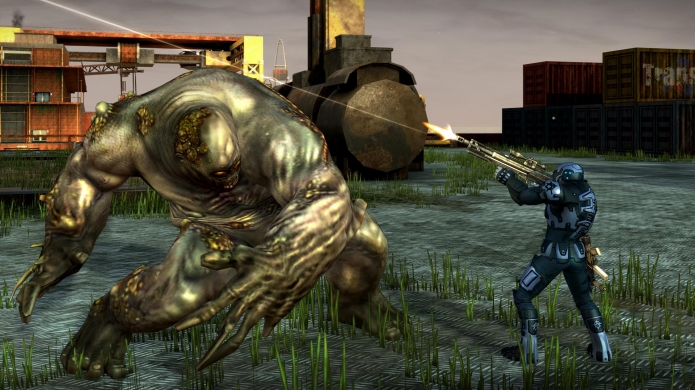 The city's not really an all-living, all-breathing life-force, in fact it's quite stagnant. People wander around aimlessly, only reacting when they are flung into the air by one of your cluster grenades, or sense their impending dismemberment by the Freak-Virus infected. These people are, however, screaming out for a cure. The rising Cell faction, intent on their ill-gotten belief (or so we are told) that The Agency have an ulterior motive, have been blasting anti-Agency propaganda over the airwaves. They believe that The Agency have a cure for the virus, yet keep it hidden and share this message with the residents of Pacific City as they gather around stereos; ears more focused on the information then the destruction of their city and the chaos reigning down around them. Good one Cell. I'm sure The Agency wants you all to die, who would they reign supreme over then? Occasionally you'll find a folk-singer strumming their acoustic guitar singing songs, reminiscent of Hippie-era 70s, rebelling against the Agency. But the development of realism ends there.

The cel-shaded cartoon-ish graphics compliment the superhero/action orientated gameplay. The city, whilst not containing extreme detail, looks different enough in neighbouring areas to get your bearings. There is enough variation in the style of buildings and landmarks to keep it interesting and the glowing orange texture and green smatterings of blood pouring from the freaks compliment the stark reds of the Cell factions' blood, providing a welcome addition to the mostly blues and grey's of the city's colour palette.

Crackdown 2's a little like Borderlands in that it's all about the co-op function. If you're a loner struggling to find buddies with an XBL account, don't worry, you can set the game to allow random drop-in, drop-out gameplay, as occurred whilst I was playing. My two player game quickly turned into a four player co-op explosion-fest. It doesn't make the game easier; it just feels like it's got more purpose.

With other players in the mix you can be conveniently revived, which is a great help as dying in single-player means you have to respawn at certain locations, meaning you may very well lose the Stronghold you were taking over, and to be honest it's mighty annoying. Co-op stat orbs are scattered around the world so playing with another player is necessary if you're an obsessive-compulsive player. 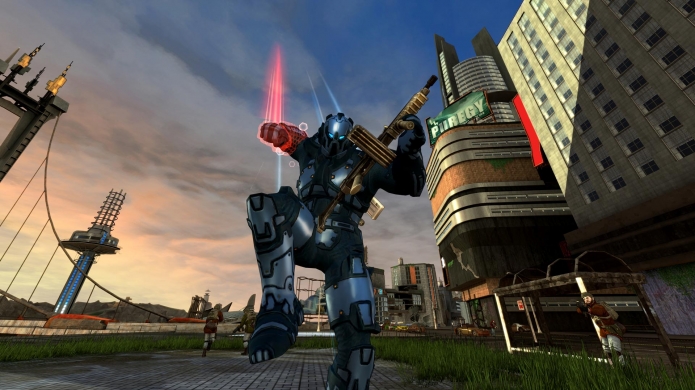 "The honour to finally cleanse Pacific City of Freaks, belongs to you!" proclaims your mysterious Agency leader, in one his many more than obvious statements. I believe this leader may have some of your cloned superhuman abilities himself. He has a magical ability to know you are playing an Xbox and he knows all about the 360's Achievement system, informing you when you achieve them.

Some awkward gameplay mechanics remain from the first Crackdown. Targeting often targets explosives or vehicles, instead of the enemy standing right next to them and there's still no cycle function, although the ability to target each limb or head still remains, which is useful when targeting from a distance. Items like the sniper rifle don't a have functioning sniper mode, they are simply more accurate when targeting, which is disappointing. Some of the best fun to be had in sandbox games is when you find a perfect vantage point and zoom in to take out your target, or targets, unawares. With so much focus on climbing structures it's a missed opportunity by Ruffian Games, but it does keep the action hard and fast. Which seems to be their intent.

Crackdown 2 isn't obscenely short, but seeing as there's little story progression (it's just a take over the stronghold, locate the beacons, decimate everything in your path affair), you can start over again and retain your stats allowing participation in more online co-op fun and extend the life of the game. Strip GTA sandbox gameplay to its basics, add some freaks, throw in some Just Cause 2 type propaganda and explosions, focus on co-op and you'll get something like Crackdown 2. If I didn't know any better, at times I could believe I was playing a massive, really good XBL game. It's simple, it's straight-up and it's explosion-smashing fun.