One of the cooler aspects of a sim tends to be the freedom and creativity this genre of game grants you to indulge your imagination. See how quickly Sims will resort to cannibalism once all doors are removed and they’re stuck living in a few rooms with kitchy 90s furniture. Plop your residential zones inside a filthy industrial park to see if easy access to work will overcome your citizens dislike of pollution. Or terrorize motorists and pedestrians with heavy construction machinery, just because you can. Unless you're playing Construction Simulator 2 US Console Edition that is, where vehicles will enthusiastically bounce away when touched, instead of being rightfully flattened by your steamroller. A world where pedestrians simply fade out of existence when you get close to them, only to re-materialise once the threat of hot asphalt rain has abated. 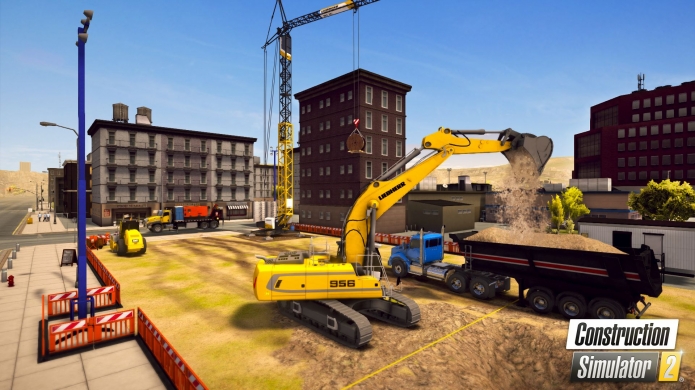 The dismay doesn't end there. Construction Simulator 2 is so unrelentingly strict in its stringent adherence to following set tasks, there is absolutely no chance for imagination or creative outlet. Put simply, failure to follow the precise steps laid out for any particular task results in a breakdown that negates the contract or job, resulting in lost time, revenue, and any potential for enjoyment.

And yet, perversely, the game is unbelievably lax when judging a task as complete. Excavating soil within a marked boundary can be accomplished by simply scooping the ground in approximately the correct area until the game decides you've displaced sufficient soil, then Bing! Task complete. Merely dangle a roofing truss or window frame in the direction of its intended destination, and the game automagically completes the task for you. I can understand the decision to spare the player from unremitting frustration and tedium due to exacting requirements, but it's a bizarre departure from otherwise rigid and unforgiving gameplay. Where the game is so relentless in its adherence to construction as a series of measured and repetitive tasks, only to then grow bored of its very existence by regularly stating, ‘yeah, I guess that’s enough concrete’. 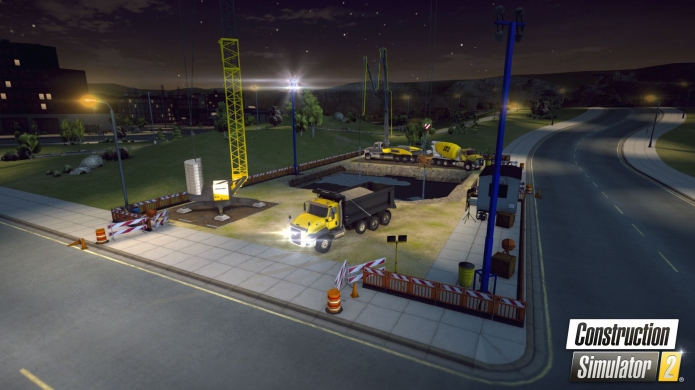 Speaking of tedium, I suspect the 30 or so hours or so I spent playing the game might have been better served learning the intricacies of accounting software, or determining just how many toothpicks I could jam into my urethra. Hey wait, you cry, how can 30 hours be sufficient to form a balanced and insightful review of a sim? I assure you, I experienced pretty much everything the game had to offer within that time. I expanded my company and earned phat stacks of cash. Every available vehicle was driven. Roads were milled, paved, and compacted. Houses, sheds, and swimming pools constructed. I excavated more holes than an acne-ridden teen, and bulldozed, graded and compacted more ground than I care to admit. Shy of completing a few Special Jobs, I'm done. I get the feeling that I would have had more fun hauling Besser blocks for 30 hours on a real construction site.

Perhaps it's unnecessarily cruel to pile on more abuse, but it would be remiss of me not to mention the unrealistic physics, the substandard graphics, the unfriendly and, at times, counter-intuitive controls, as well as the shitty camera that resets every time you switch vehicles. There are invisible walls to encounter when seeking a shortcut across the terrain, and multi-ton vehicles suddenly fly through the air when obtusely striking an immovable object like a streetlight or signpost. Watching the exact same flock of birds scatter the exact same way each and every time I drove past became a testament to the lifeless, utterly dreary nature of the digital United States of America as depicted here. 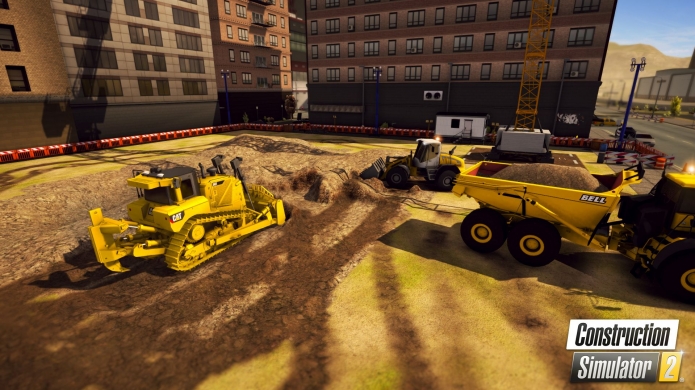 One redeeming feature, without which I would have been completely lost, are the tutorials. Every vehicle, trailer, and concrete bucket comes with its own scripted exercise in usage. You exchange some cheesy dialogue with your foreman, followed by precise instruction in the handling of heavy equipment. The lessons are delivered in the same authoritarian step-by-step procedure the game utilises for performing tasks, but boy is it necessary here, due to the arcane nature of the esoteric machinery involved.

CS2USCE has the potential to be an intuitive and engrossing sim. Imagine a fully deformable environment, where you can bulldoze your own shortcuts through the terrain prior to building your very own private road. Building your Home Bases instead of leasing them would be a better tool for advancement. How about letting me construct a building any way I choose, with remuneration appropriate to the quality of the finished product? I can slam through traffic with a behemoth of a mobile crane (not as awesome as you or Jonathan Mostow might imagine) yet am unable to hoist aloft other vehicles or pedestrians because they don't have a valid connection point. So many possibilities exist to make this into an exciting and enjoyable game. Sadly, in its current form, it just isn't.