Remember when it became clear that Seinfeld was a show about Jerry and Larry’s pitch to NBC to “make a show about nothing”, but then Curb Your Enthusiasm one-upped the meta breaking what could be considered the 16th wall, by making a show about Larry’s life post-Seinfeld, yet revisiting that ground, and then also somehow factoring in the creation of Curb in and of itself? The whole thing, as a landscape, is a meta dovetail of cathartic indulgence on comedic plains essentially untouchable by mere mortals.

As videogames begin to embrace the Groundhog Day ‘loop’ gameplay mechanic (which will be huge in the future), the conversational “game about nothing” (excluding the actual Seinfeld videogame pitch by Aussies Jacob Janerka and Ivan Dixon), is practically nowhere in sight, despite the irreverent potential that lies within. 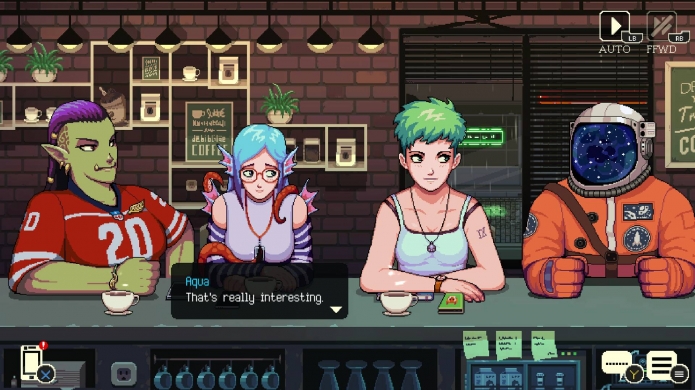 One exception though, is an Indie from Toge Productions by the name of Coffee Talk, and as you’d expect, it is a game centred around conversation and coffee… so, it’s an elevator-pitched game about nothing. But as with Seinfeld’s groundbreaking premise, “nothing” is a misleading doorway to myriad topics and conversational tentpoles; social observations reflected in the confines of a barista’s bar, ear and benchtop backed against a rainy night time Seattle -- the home of coffee, as far as Americans are concerned. And it’s accompanied by a chill-beat collection of tracks perfectly befitting the setup.

"Much of Coffee Talk is about conversation and observation. You learn each character’s plight night-to-night and as the game progresses, they’ll need new types of drinks to help them relax, perk them up or to just sip away the time..."


The interesting part of Coffee Talk is that the gameplay really only comes in the form of making coffee. Which might sound boring, and at times you’ll crave that tiny slice of interaction, but as with Lucas Pope’s brilliant Papers Please, much of Coffee Talk is about conversation and observation. You learn each character’s plight night-to-night and as the game progresses, they’ll need new types of drinks to help them relax, perk them up or to just sip away the time. It’s a game unlike anything else, but the writing within is exquisite and on-point as a reflection of the world we live in right now. What helps, however, is that Toge has taken the fantasy basis of so much gaming and baked into a believable world. This isn’t a coffee shop that serves only humans, its clientele is as rich and vast and the wider fantasy world outside in the rain-drenched Emerald City (and beyond).


Hyde is a vampire. He’s also a model, and has been modeling for decades, yet looks no older than an early 20s millennial. His close friend, Gala is a war veteran and a hospital admin -- a role he’s held for decades as well. Gala is a werewolf. Myrtle is a female orc who works on one of the world’s biggest videogame IPs -- Full Metal Conflict, she’s a quiet observer and spends most of her time on her phone, but has a soft spot for the Atlantian mermaid, Aqua who works in R&D at the local university in tech, but has high hopes of making it as an Indie game designer. Lua and Baileys are a mixed race couple -- Lua a succubus and Baileys a high-elf. Both races consider the other off limits as far as romantic entanglement goes, which leaves these two -- who’ve been together for years -- in a precarious predicament as they each want to take the next step, but their families pose as impenetrable roadblocks to happiness.

"They’re socially awkward but astute at learning how our complicated interactions and constructs, person-to-person, manifest and play out in both positive and negative ways. 10 points for guessing why they chose the name Neil..."


Neil is a collective; aliens trapped in an astronaut suit scouting Earth for mates to begin laying seeds. They’re socially awkward but astute at learning how our complicated interactions and constructs, person-to-person, manifest and play out in both positive and negative ways. 10 points for guessing why they chose the name Neil. Then there’s Rachel and her father Hendry, shape-shifting nekomimi able to transform from a cat into a bipedal human-like form while still keeping their cute ears and tails. Rachel is teen pop idol on the verge of an explosive solo career after a stint in a girl band, but her father is steadfastly against it and, further, having been in the industry himself -- behind the scenes -- when he was younger, is concerned for her welfare as he knows how seedy and debaucherous that life can be.

These are the game’s main players, but everything truly centres around a young writer by the name of Freya and you, the Barista, in my case Stephen.

"[Freya] has a tendency to speak her mind and rub customers the wrong way, but everyone’s cascading issues and relationships has given her the idea to centre her novel around the world of Coffee Talk and the characters within -- names altered, of course..."


The dovetailing of all of the above is that Freya has decided to slack on her work for the local rag and write a novel. She’s your best customer and something of a regular at Coffee Talk. Her and Stephen (who I’ll be referring to as the Barista and player collectively from here on out) have a push and pull relationship where Stephen keeps her in check, but also constructively reinforces her ideas and grand plans. She has a tendency to speak her mind and rub customers the wrong way, but everyone’s cascading issues and relationships has given her the idea to centre her novel around the world of Coffee Talk and the characters within -- names altered, of course.


Throughout the course of the game, Freya consistently refers to her novel as being not novel-like at all, but something on the fringe; referencing Choose Your Own Adventure and even on-the-nose videogame examples. It’s the meta I’ve been harping on about, and while there’s not a lot of ‘choosing’ going on from a player perspective, how you manage the game’s drinks and service becomes the backbone for the experience. This is Freya’s novel, only you’re living it in real-time, and that’s the easiest way to describe it.

The game’s soundtrack and pixel-art visuals help pull you into the world, and after each ‘chapter’ you get a copy of the newspaper (similarly to how Papers Please also did) where you can read pertinent headlines in relation to this alternate Seattle of 2020 (sometimes those headlines are prophetically on-point against our real-world 2020 as it is now). But what you should be preparing yourself for is a game with massive dialogue and very little in the way of ‘gaming’. It’s not a detriment, as it helps the experience standout, and I couldn’t stop once I was fully invested in all the characters. Plus, it’s a quirky Indie and fringe developers need all the help we can give them. So pull up a stool and order something warm, this might just become your new favourite cafe.