Sometimes being labelled the spiritual successor to a popular game works out well, but too often it doesn't. The moment you tell people a game is a spiritual successor, you're begging them to put on their rose-tinted glasses. And that makes sense, right? If you're remaking an old game, one people loved, but you're doing it off-licence and therefore without the shackles that the franchise brings, all anyone expects is roughly the same game, graphically improved and with any bad parts fixed. That's setting yourself up for failure from the outset. And if the game you're succeeding happened to have very, very few bad parts, like Alpha Centauri...

For this reason alone I've spent the last few months ignoring claims that Civilization: Beyond Earth was a spiritual successor to Alpha Centauri. Because as sequels go, even sequels with different names, Alpha Centauri took the Civilization II formula and threw it on it's head. Most of what we now know to be "Civilization" originated in AC, dragging it from being a war game with little politicking and into diplomatic and social arms race most know the game for now. Civilization: Beyond Earth doesn't do this for Civilization V -- I can't even fathom another such revolution -- but that doesn't mean it's bad. 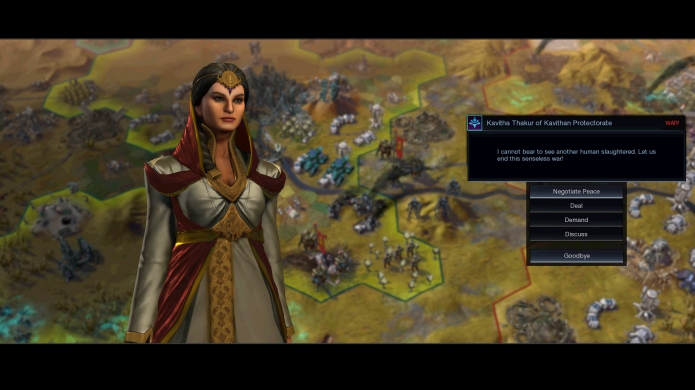 At it's core, Civilization: Beyond Earth is a space add-on for Civ V and it knows it. I know it knows it because if you don't have a fairly soIid grasp on Civ V's mechanics, Civ: BE will only teach you the absolute basics. That's not an issue, really -- Civ V is a four year old game and there are plenty of resources available for players who want to learn -- but it does illustrate the thrust of the game's intention.

Civilization: Beyond Earth begins at the end of all civilisation, and it starts out fairly complex. Even before the game has started you're making choices which will have important ramifications for your success deep into the game, and you need to make those choices correctly. The faction I picked, the Polystralians, gave me two extra trade routes -- this seemed like a great idea when I was just starting, but eventually my only advantage would be overwhelmingly negated.

Other elements I had to choose were the people who joined me in my shuttle to the new world - I took some Machinery for an extra Worker unit, some scientists for the Research bonus and Retrograde Thrusters, because more space to choose my City's starting area could only be a good thing. Because you've hand-picked the foundation of your new start on this alien planet, you really feel invested in their success, and this is a fantastic addition to Civilization. 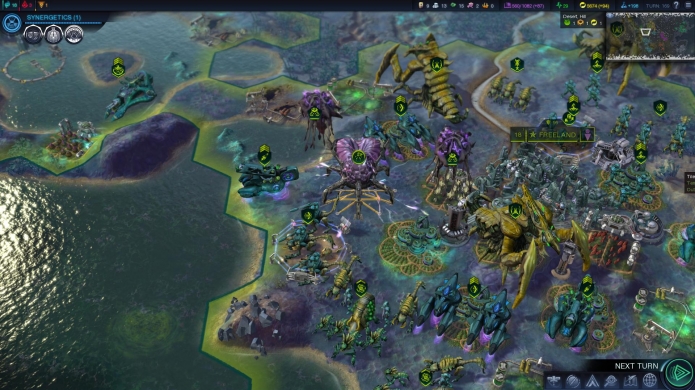 The tech tree from previous games is replaced with something more akin to ivy, a sprawling web of options encouraging players to lose themselves as they try to better their people, and the first few games you play the entire process will seem rather daunting. As you research, pouring resources into Science while your people explore their strange new world, you'll begin to choose techs either based on your Affinity or based on quests you need to complete. The web reaches outwards, but each node on the web has 'leaves' which you can research to further augment and amplify the effects of that research. If you research Social Dynamics (essential if you want more cities) you can further amplify the effects of that tech by researching the Euthenics leaf -- and you'll get a nice bonus to the Supremacy Affinity, if that's your goal.

Affinity is your over-arching goal, one of three choices -- Purity, Harmony and Supremacy -- which dictate your style of play. They represent philosophies of colonialism -- Harmony encourages players to adapt to their surroundings, Supremacy dictates that bend their new home to their will and Purity rejects the influences of the alien world on human purity.

Superficially it seems like Supremacy might be the way to go for war-mongering civs, but in practice any Affinity enables players to continue to strive towards a dominance victory. Even the hippy-sounding Harmony Affinity simply allows you to adapt to the planet better, absorbing everything from their tech down to their DNA. What's even better is that when you earn an affinity upgrade for your units, all units are instantly affected. You don't have to call-back all your troops if your marines are due for an upgrade in Beyond Earth. 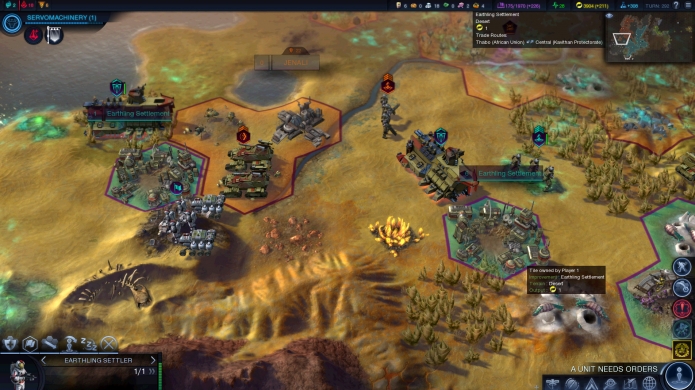 One thing I've noticed in Beyond Earth is that the Domination victory is no longer the surest path. I've always considered Domination Victory in Civilization to be sort of the default -- if all else fails, at least you can wipe everyone else off the face of the planet -- but in Beyond Earth this seemed to be a lot more difficult. The Aliens constantly roaming around the map are a tweak on the Barbarians that you eventually ignore in previous Civs, but here they remain a constant threat. They'll get stronger as the game continues, and I wasn't able to theorycraft this 100% but they also seemed to become more aggressive the further I increased my Affinity as Purity or Supremacy civilizations. When I went full Harmony, I found that the easiest path to Victory was through the Affinity itself, where I built a wonder and protected it -- eventually becoming one with the planet (but not until after a lot of blood was shed).

The Affinity Victory is technically a Quest, but it's not the only Quest you'll see in the game. They tend to be fairly boring -- too often I got a quest to research a tech I was already nearly finished researching -- but when they encourage you to try something outside of your normal playstyle they really open up the game. It's part of Firaxis' attempt to increase the narrative structure inside Beyond Earth, but too often it misses its target. It feels like it exists simply because, after promising a spiritual successor to Alpha Centauri, the team realised they needed to tell some sort of story and this was the easiest way to do that.

Too often narrative elements in the game don't hit their mark. The voice acting in the game is inconsistent and sometimes your leader doesn't want to shut up, talking about all the great things your people will do. At other times they don't speak at all -- they're quoted talking about research projects, but they don't actually say their quotes outloud. At first I thought it was an audio bug, but eventually I realised it just didn't exist. 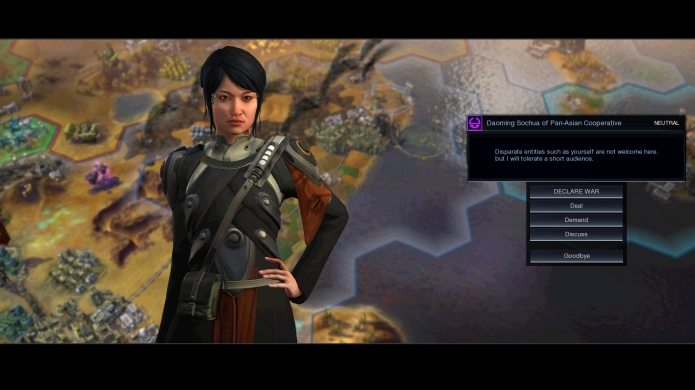 The concept of Diplomacy with the AI continues to elude Civilization, so most of the AI still goes into warmongering for the game. It's time Firaxis poured resources into creating an AI capable of more than simple border agreements -- if not for Beyond Earth, at least before they create the next Civilization. Despite the fact that the AI's strength is in fighting, I noticed very little actual warring, except when I was the target. If I'm not wiping out other Civilizations, typically nobody is.

As first impressions go, Civilization Beyond Earth makes a staggeringly poor one. After a few games -- after you get your head around the affinities and the tech web and the dos and donts of living on an alien planet -- it becomes a gorgeous and engaging, if not revolutionary, 4X game. Put aside your expectations of an Alpha Centauri successor, play it like a sci-fi Civilization V and enjoy experimenting with the combinations of sponsors, affinities and techs.