It took some cojones for Techland to contemporise its Wild West FPS to the modern drug war in America's backyard. Recent history is littered with games that were pooh-poohed because they had the audacity not to be set 'overseas' in Fakeazthistan. It's unfortunate then that while The Cartel is testicularly bold in premise, it's plain ol' balls in execution.

Techland tried its best to season this stew with a 'true grit' flavour, but wound up making vanilla sarsaparilla instead. No matter which one of the cops you endure the campaign with - be it the Walker Texas Ranger wannabe, the Halle Berry knockoff, or the DEA Mexican('t shut up for five minutes) - you're in for some bad old-fashioned, son-of-a-glitch shooting.

Whether you’re unloading assault rifles, or John Wooing folks with dual pistols, the gunplay in The Cartel always feels anaemic. Your enemies are bullet sponges, iron-sight aiming comes with a weird depth-of-field effect (that looks like someone has slathered your TV in Vaseline), and it takes close to one whole playthough before you can unlock a decent heavy machine gun. Speaking of which, for some reason all protagonists can’t fire their basic pistol without it flipping around like a hyperactive fish, but they’ve got gorilla wrists when using a .50 cal. Bizarre. 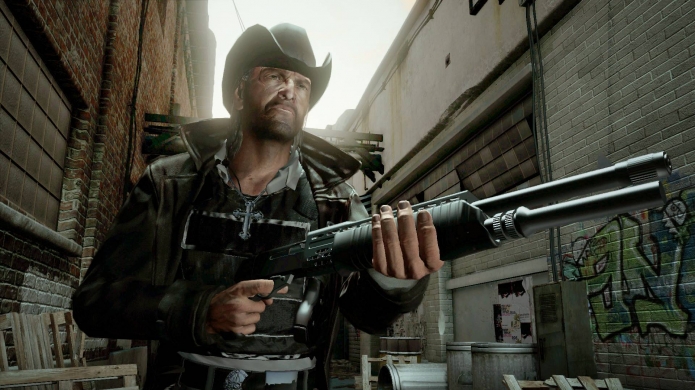 In terms of enemy targets, I've seen flashbang victims more spatially aware than these goons. The two friendly AI aren’t much chop, either, as they regularly Casper right through one another, or teleport into existence right in your crosshairs when their pathfinding code gives up the ghost. Not only is this problematic in a firefight, but their dogged stupidity becomes a huge issue when you want to shepherd them out of a room and keep them well away from yourself.

Why would you need to do that? Because it's a leftover requirement of The Cartel’s three-player, co-op mode (which, incidentally, happens to be the only unique idea going for the game). At certain points in each level the three protagonists will get different phone calls from whiny acquaintances asking for an illegal solid. The end result: rather than covering your buddies in a firefight you’ll sneak off to earn XP by planting false evidence, stealing cash, or doing other nefarious deeds. Do it in full view of your (equally corrupt) cohorts and you’ll be penalised. Admittedly, this can be a bit of fun in all-human co-op, but downright painful when you have two AI buddies tailing your footsteps so closely they may as well be growing on your arse.

The experience doesn't get much better when your eyes drink in the Chrome 5 engine and realise it's past its expiration date. I saw many a rookie issue like corpses breakdancing in walls, butt-ugly vehicle sections and a criminal amount of environment reuse and backtracking. But just as your eyes are wincing, your ears will bleed as well. The Cartel reeks of 'try-hard potty-mouth' syndrome. You’ll find this out early on when you trigger the ‘slow-mo’ ability only to hear your protagonist mumble bible scriptures interlaced with motherfucker-bombs. This wouldn't be so bad if there were more than just a handful of these not-so-penitent sermons. Honestly, you'd have to sip the wrong Holy Grail to see something get old quicker than this.

As a single-player experience The Cartel isn't so much an arresting experience as it is a total bust. Techland opting to move Call of Juarez forward in time has effectively made the franchise go backward. Sure, there are some minor kicks to be had in three player co-op, but they're very short-lived and fraught with frustration. Call of Juarez should have stuck to its guns and remained an Old Wild Western. Avoid this like you would the real po-lice.