What is an Infinite Warfare when it's at home? Short answer: A CoD based on shooting folks in the face in space. It could also be aptly described as the least anticipated entry in this long-running series. Sequel-fatigued fans are sick of the sameness in their CoDs, but when Infinite Warfare revealed its intent to reach for the stars, well, that just seemed to piss them off even more...

Those of you up on your CoDs will also remember that this year's model is Infinity Ward's first offering since Ghosts, a flawed production barely remembered for a farfetched premise, jingoistic characters, and a gimmicky Navy SEALS canine. Amusingly, Infinite Warfare basically ignores "collar duty" and its cliffhanger ending. Shit never happened, folks. As unorthodox as this decision is, it's the best possible start to freeing this once-revered developer from a doghouse of its own making. 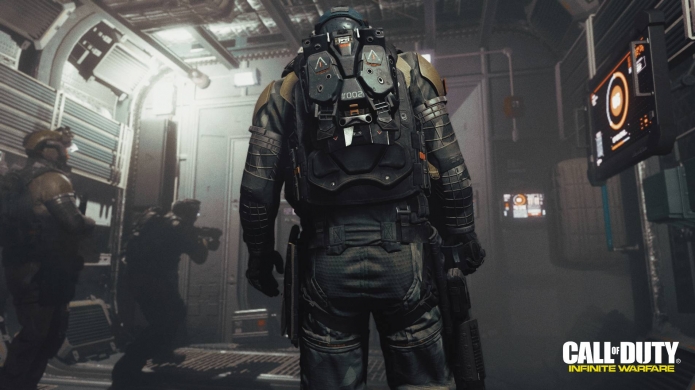 Let's jump right into the stuff that matters most to any CoD fan worth their KDR, multiplayer. Fears of Battlefront lasers and blasters can be put to bed, the overwhelming majority of weaponry feels rooted in realism, and there is even a Classics section for anybody stuck in a Modern Warfare loop (quick shout out to the MacTav-45). The act of stalking your prey feels more akin to BLOPS III rather than Advanced Warfare or any other entry. Wall-runs, boost jumps and slides all make a comeback, though air-dashing stays on the sideline. An engagement in IW has a slightly slower, ground-based feel to it, however the time-to-kill is lighting quick.

Fans of customisation will no doubt lose a great many hours tweaking the six Rigs on offer into score-streaking beasts. The main difference between these and the Specialists of BLOPS III is you can switch out after a spawn, thereby allowing you to table-turn your oppressors with three different Payloads (super moves) and Traits (unique perks) in one match. This totals more than 50 different combinations, which means there's always a new surprise waiting for you just around the corner (usually about to boost-slide under your reticle with a shotgun that can turn your arse to ash).

Along with the standard Warfighter Rig -- a jack-of-all-trades setup that comes with a nasty room-clearing SMG that can kill around corners -- beta players will also be already familiar with the Merc and Synaptic Rigs. The former is a tank class with a bull-charge shield move, and the latter enjoys faster refreshing thrusters and the ability to turn into a rampaging robot dog. Because Infinity Ward and dogs. 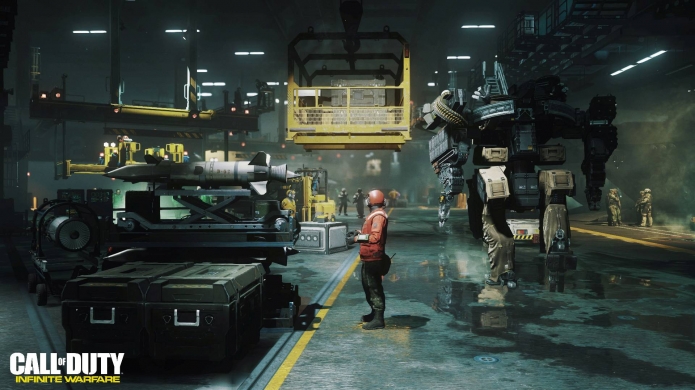 Fans of Destiny's blink-jumping Hunter class will gravitate towards the FTL Rig with its befuddling teleports and other annoying assassin techniques. Lane-controllers will likely invest in the Stryker’s array of mini-turrets and tac-support drones. Last but not least, wannabe Lee Harvey Oswalds can snipe with confidence as a Phantom; they can hide in plain sight using a sexy number from the Predator spring collection, and there's an interesting Trait that lets them painlessly absorb a bullet or two from behind. From there you can escape, or spin about and get that quick-scope retaliation (the ease of which is currently a little annoying, expect a patch).

All of the expected multiplayer modes are here, from traditional TDM, kill confirmed and hardpoint to more interesting affairs like gun game (murder once with every gun on your shopping list), infected (a game of gang-up tip with boomsticks), or defender (an oddball-style game of keepaway). Personally, I hate running afoul of the occasionally bullshit spawn-death, and so I happily gravitated towards the new, fixed-spawn Frontline mode. It's essentially a base-based affair featuring a risk-reward mechanic for anybody brave enough to venture out of their home (armour degrades out in the wild, but you get double points for kills).

Having so many Traits and Payloads makes for interesting, constantly shifting tactics on the battlefield, but I still can't help but feel I've played this MP before. This is a feeling mirrored in the new Zombies mode entitled: Zombies in Spaceland. It's all of the head-shotting, money-grubbing mayhem you already know and love, only this time you and your co-op pals are a bunch of walking talking 80s cliches. Likewise, you'll be fighting to survive in a labyrinthine theme park awash in neon lighting and a sweet synth tracks delivered by DJ David Hasselhoff. 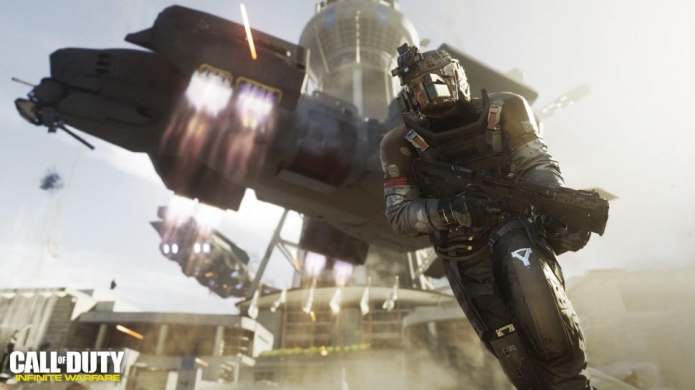 The aesthetic is spot-on and frequently hilarious, but there's not a helluva lot new going on. Infinity Ward has deliberately lowered the difficulty curve to lure in first-timers, and even if a bunch of you do come unstuck, you can self-revive by completing a bunch of carnival mini-games. I appreciated the efforts that have been made to make the card power-ups more beneficial to the team as the whole, rather than the individual. And I can see myself coming back to the mode a lot more than any previous CoD, thanks to the gun crafting/collecting. Beyond those things ,expect few surprises, just the usual addiction and fundead times.

The most meaningful changes in this year's package are in its single-player offering. Paradoxically, it's a down-to-earth campaign that's focused on a tight-knit group of military personnel fighting a solar-system-wide war. A fairly ineffective Kit Harington stars as Admiral Salen Kotch, Martian despot at the helm of what is basically the Helghast 2.0. While you're ensuring Earth doesn't become the next killzone, a surprisingly entertaining tale unfolds; the principal conflicts of this tale are not Mr Lord Commander of Space, rather the priorities of personal loyalty versus one's duty to the mission. Throw in a comedy relief robot squaddie who steals every scene he's in, plus an aftermath that managed to move even my black heart, and this is one of the strongest CoD solo campaigns in ages.

Yes, of course, it's a painfully short 5 hours, but only if you're trying to do yourself a disservice. In my first attempt, I personally clocked all 12 main missions on Veteran in that amount of time, but I neglected to dip into the 19 side-missions which unlock in clusters and may be attempted in any order you wish. The perks and upgrades these side-diversions hand out are pretty much essential to your survival in the Specialist and YOLO difficulties that unlock. 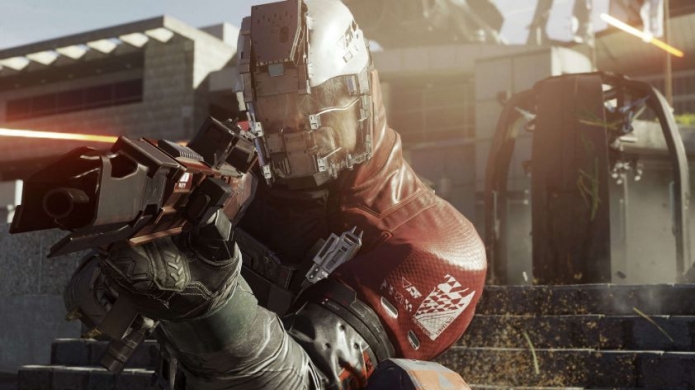 The former involves an extremely harsh wounding system that will seriously impede your movements, knock your gun from your hand, or rupture your helmet and asphyxiate you if you don't find a nearby replacement quick. YOLO is the same again, except death is a save file wipe. This appeals to my Ultra-Nightmare masochistic tendencies a great deal. Infinite Warfare is without a doubt the most challenging CoD campaign since Veteran mode World at War treated me like a newlywed and enemy grenades like confetti.

That said, the narrative and mission structure on offer follows the old formula rather doggedly. You know the deal: corridor rollercoasters filled with big bang moments (which, admittedly, look bloody amazing on the PS4 Pro I had access to). The usual shooty-bang-bang is only occasionally switched up with zero-G shootouts in asteroid belts, moments that never feel gimmicky, but can be an absolute bitch in the harder difficulties due to a lack of any reliable way to enter cover quickly. Infinite Warfare is also liberal with its Jackal dogfighting moments (think: fun mini-arena blast-a-thons, lots of lock-on assistance, and it looks amazing in PS VR).

In the end, I thought Call of Duty: Infinite Warfare was two things: a triumphant return to form for Infinity Ward, but also a return to safety and sameness in at least two of the three pillars. Multiplayer, while solid and highly replayable, is fraught with deja vu and I have concerns that some of the OP, built-in gun perks will devolve this into pay-to-win. 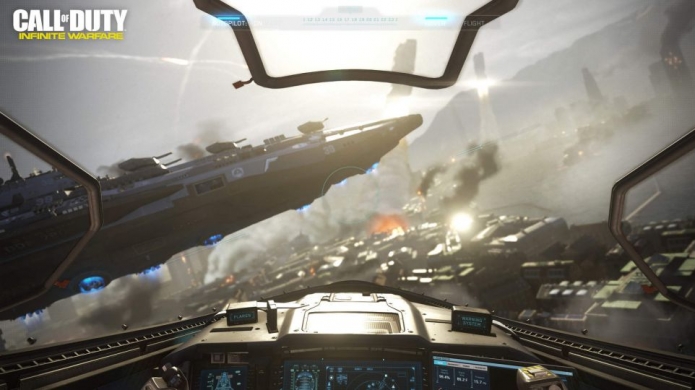 Likewise, Zombies and solo are well-produced and promise to offer challenge in the long-term, but a lot of it is retrodden ground. Bottom line: Call of Duty: Infinite Warfare is a safe bet for a solid FPS experience. Looking over the fence at the competitors, you've really got to wonder if this was the best year to play it safe instead of boldly going beyond.