For the past two weeks I’ve been battling my own demons. Not so much Lovecraftian in their form, rather demons of expectation, hope and support. You see, I’ve been championing Call of Cthulhu for just under two years now, having been excited by showings at E3 and Gamescom -- the game spoke to me. As a survival-horror enthusiast, everything on pen and paper was sound, and even the first four chapters I played of the game in preview form, albeit sloppy from a tech perspective, still gave me hope. You know, it’s a preview and therefore ‘unfinished’, and all that.

In the immortally terribly-delivered, fakely accented words of John Malkovich as Russian gambler and organised crime heavy, Teddy KGB, from the seminal not-classic, Rounders, “pay that man his money”, only here let’s change it up to “pay that studio more money”. Because their poker hand; their river, if you will, is deep and full of winning promise. They just have zero ante and no means to go “all in”.

And that’s the shame of Call of Cthulhu -- this is effectively a point-and-click adventure represented in [poor] 3D form, with wonderful audio, limited scripting, even more limited gameplay and gameplay presented in disparate form: often with no direction and hardfails that are at odds with what appears to be an attempt at a streamlined experience into descending madness. And yep, that’s a mouthful to take in, but I’ll do my best now to dissect the bad and the good for a comprehensive take on what should have been knocked over the fence for six, given the subject matter.

Firstly, the world
H.P. Lovecraft’s love affair with the ocean and its depths is something we should all wish was still happening in a more contemporary way, where horror storytelling is concerned. In Call of Cthulhu, the team goes as far as they can from a written perspective to honour his expansive vision of the deep and dark. And with limited resources, pull off a fantastic, if overly segmented, story. The bigger problem is the game-world itself; represented in disparate fashion throughout, and repetitive to a fault. In the early throes you have access to the harbour where angry fisherman will repeat their superstitions over and over. You’re gated to the nth degree and the game holds your hand barring a few small diversions for a similar outcome.

It’s problematic, because even just a little bit more care here would have helped establish the cold shores of Darkwater Island and its work-starved, booze-fuelled denizens as exposition fodder. And that you kind of waltz in and out of interiors without them ever being presented in any overworld sense makes the whole thing feel disjointed and heavy-handed, from a directorial sense. The lore, the island’s history and its baked-in Lovecraft Older Ones is awesome, but it never feels seamless, connected or part of any agency. 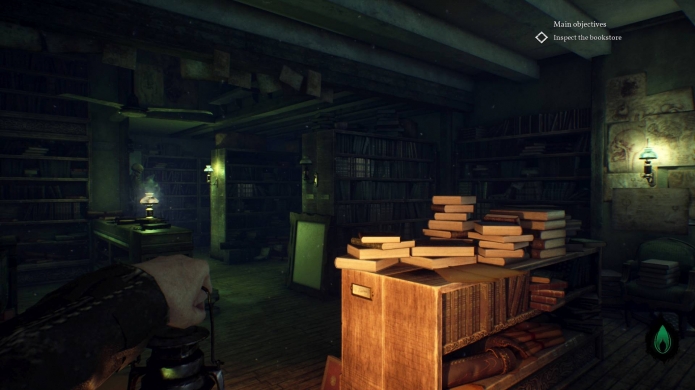 Secondly, the characters
Pierce is a fantastic protagonist. And the game’s writers have done a wonderful job of not only writing him, but reflecting any player questioning in the goings on, through him. But conversation and exploration is repetitive, or at least limited. As an investigation-based game more dynamism would have been a massive boon, and to be able to deduce on your own could have gone a lot further than being told drinking whiskey or reading a book would “impact your destiny”.

It’s also a stretch that so early in the game Pierce is so open to the Occult and the far-fetched. Often, because of the heavy-handedness of the game’s direction, your placement of Character Points feels superfluous, as well. Add to this the idea that Medical and Occult CP is gated by what you find in the environment and therefore locks off certain questions and investigations, even to the most thorough player, early on and you just get -- again -- a really disjointed experience. So in a sense, the game fast-tracks itself, then sort of takes care of your CP placements for you -- meaning in many ways, your damned if you do, and damned if you don’t.

On top of this is the limited interactions and nature of the NPCs you do deal with. Cat, for example, is an interesting character, but you never feel like you have any agency over your testy relationship with her, and characters just kind of come and go. Much of this is deliberate to disorient the player, but it’s just not handled very well.

Thirdly, it’s a tech thing
Which brings me to the game’s overall presentation. In my preview I wrote that it felt like sections of the game were done either by different teams, or with more time and resources versus sections with limited… well, all of it.

Call of Cthulhu is mostly a technical mess. Visually it has great art-direction, but we’re in a period of time where using Unreal Engine should net you a default level of passable polish, but that just doesn’t exist here. What we get is low-poly characters, limited animations and essentially no textures. Nothing jumps from an ambient occlusion perspective, and it’s all very dreary and, again, repetitive. The game’s lighting is excellent, which helps sell the mood, but when you’re lighting a poorly defined, low-poly part of the environment, repeated, it’s just not cricket. Moreover, the handful of cut-scenes that interrupt gameplay to sell story beats are at visual odds with the product on the whole.

The game’s most redeemable feature is its audio, and specifically its soundtrack. VO is, as I’ve mentioned a few times, repetitive while ambient sound also falls into the same trap. The soundtrack is amazing and the lines and performance delivered by Anthony Howell as Pierce are commendable, but it’s very clear to see that more budget would have been a bigger factor in delivering what, on paper, sounds like a fantastic game.

And so… Four
For all intents and purposes, Call of Cthulhu should have been amazing. Every element is there and it’s clear the studio had lofty ambitions, in as much as it’s clear they were working to an incredibly tight budget. Give this studio a bigger budget and a project they believe in, and I’m confident they’ll break myriad ceilings but Call of Cthulhu isn’t the breakthrough I thought it should have been. And it’s not helped that it has emerged in the year of polish by way of a number of other Triple-As, lead ceremoniously by Red Dead Redemption 2.

Neither game has anything to do with each other, other than what’s in your wallet, purse or pocket. And that’ll be the defining factor and also the reason these guys might not get a bigger budget next time around.

But please, Focus Home Interactive, there’s promise in Cyanide -- they just need the cash-money to back it up.

Call of Cthulhu is for the diehards only.