Welcome to the 26th century. It’s a glorious time to be alive, where manly bromance exists between special ops soldiers, dick and fart jokes abound, the brown colour palate has cast aside and cranked up to rainbow powered proportions and revenge is the only dish on the menu. As part of the elite Dead Echo unit, you play Grayson Hunt, a government-sanctioned killer with no qualms in doing whatever it takes to get the job done for his self-serving commanding officer, General Sarrano, and the Confederation of Planets. That includes women and children and a whole mess of causalities making their way to dead place.

But something smells rotten in space Denmark, and after casually slaughtering innocents by the dozen, a small thing called a conscience begins to rear its ugly head. The entire team goes rogue, leaving their black ops lifestyle for one of piracy, and after a decade or so, seek out Sarrano for a little bit of payback. The stage is now set for our intergalactic tragedy, with Grayson for some unconscionable reason taking it personally; putting his whole team in jeopardy by attacking the general’s monolithic battleship head on. 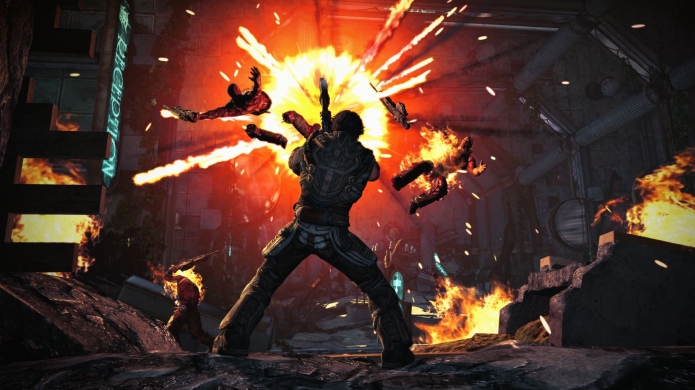 As luck would have it, he somehow manages to incapacitate the ship, and makes it through more or less intact. The team’s conscience and moral centre, Ishi, is not so lucky, neither are two other members of Strike Team Awesome (may not be their real code name) who shuffle their digital coil. With their ship going to pieces and Ishi a barely alive half cyborg, Grayson and his buddy crash land on an armpit of a planet called Stygia and thus the revelry begins.

The once lush and beautiful resort planet has seen better days, now populated by all manner of mutated maniacs that would like nothing better than to hack your face off. After locating a signal and searching for a way off this stinking cesspool, two major events take place to kick the plot on its merry way. Grayson locates a beacon with an outlawed energy leash, which attaches itself to his left hand, and he learns that the General and some of his crew actually survived. Now all that stands between him, revenge and getting off this accursed rock is a planet filled with snarling psychopathic sociopaths. In the words of Charlie Sheen, “Bring it!”

Bulletstorm isn’t your regular first-person shooter. There’s no real cover mechanic and all weapons have a distinctly unconventional twist and charged fire. Your objective is to survive, but mere killing is so 2010. You’ve got to do it with style and flair, or as People Can Fly put it, “kill with skill”. To that end you use your energy whip to grab, pull and fling enemies into all sorts of nasty living and environmental hazards to net yourself “skillshots”, that award you points to use for upgrades, new weapons and charged attacks. In theory it all sounds wonderful and it almost makes it over the line. 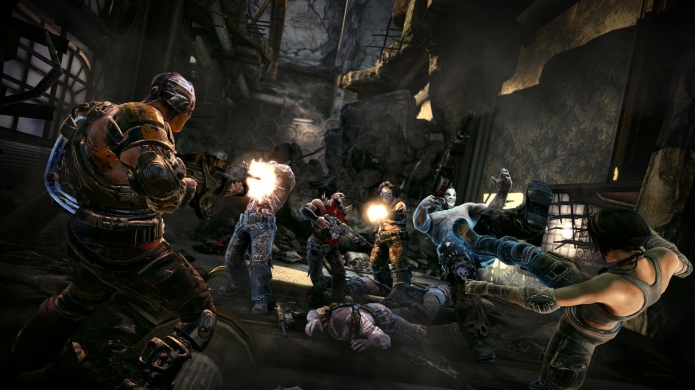 Each time you pull off a skillshot for the first time, you’ll get a points bonus, plus players are encouraged to go for multiple kills. Using the leash you can pull guys towards you and then kick or bulletslide sending them into all manner of wickedness before their appointment in Hell; be it into a cactus to unlock Pricked, a live wire for Shocker or a bed of spikes for Voodoo Doll. These are the stock standard basic kills and you’ll do them time and time again. It’s when you unlock the Thumper attachment to your leash and a few more weapons that things get interesting.

Let the Thumper bring the hammer down and all the crazed kooky little bastards will head skywards. This is particularly brutal if you pop it in doors as the Flyswatter skillshot comes into effect, turning them into itty-bitty pieces you scrape off the ceiling. Some of my personal faves were Mercy, where you shoot a guy in the nuts and as he’s crying like a little bitch you kick his head off putting him out of his misery. Fire in the Hole is for taking down a mini-boss by kicking them from behind and shooting them in the butt, Gang Bang, when using the remote control explosive Flail Gun to detonate a charge around several bad dudes, Juggler for keeping a mutant airborne with your shotgun Boneduster, and Acid Rain for a post Thump charged Boneduster round that vaporises anything in the fight.

Some of the skillshots are truly magnificent and there are some brilliant set-pieces to compliment them. You outrun a gigantic wheel on a train line that is ever-so-close to bowling you over. You’ll control a robot Godzilla and lay waste to a bunch of banditos; you fight an enormous Hekaton dinosaur that makes King Kong look like a play toy and a Venus fly trap that wants to nom your insides. The bosses are inventive and diverse and the weapons all have interesting slants, like the Bouncer firing cannonballs of doom, the Penetrator shooting off massive impaling drill bits and the sniper rifle, Head Hunter, with bullets you can guide for the last seconds and even make go boom with a charged attack. These are all really cool concepts. 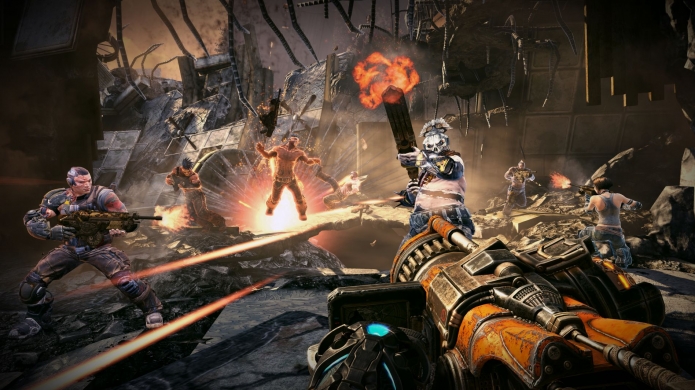 The main problem is the way the game handles. It constantly penalizes you for doing what it is you’re supposed to. It constantly throws Gatling gun gyrocopters at you with little or no cover and then almost laughs as you die. I felt like the level designers at times were taking the piss and it really did start to annoy. You also don’t get many of the choicest charged fire options until very late in the game, and while I appreciate they’re encouraging replayability, it just ends up annoying the crap out of you. It’s like someone setting a generous buffet in front of you and only letting you eat as its getting cleared away.

It also doesn’t know if it wants to be a B-Grade action spectacular or a redeeming tale of brotherhood. I was far more comfortable with Grayson being a brash, brazen douche bag out for revenge at any cost than a troubled warrior atoning for past discretions. Stick to your guns and make him a dislikeable rogue and I’ll back your play. It felt like someone from marketing got a hand in and said, we need to make him more appealing so change it up, and in doing so wrecked him entirely, as they did with the bi-polar Ishi. Perhaps the most interesting character in the game; his internal conflict between Grayson’s duty-bound wingman and the cold calculating CPU loyal to his senior officer Sarrano, was one of the game’s highlights, left partially unresolved and reeked of sequelitis, and I can’t stand it when they make a play for a franchise that blatantly obvious.

It was really hard to score this bad boy. There were parts that I absolutely loved and parts I bitterly despised at the same time and that’s the crux of Bulletstorm. It has a bunch of really neat ideas, but they just don’t seem fully fleshed out. Grayson doesn’t move nearly as fluidly as you’d expect and a lot of the sexiest charged attacks aren’t available until very late in the piece, while the over-the-top friendship between bromigos Grayson and Ishi gets all touchy-feely, taking with it a generous portion of the B-Grade shine.

It makes it so close, yet so far in so many categories, which is surprising for a title that supposedly revels in its balls-to-the-wall attitude. I feel the best way to score it, is to embrace its “three quarters of the way there” mentality and mark it accordingly. Bulletstorm is by no means a bad game, but somehow still leaves you disappointed by the time you reach the final act.