Four days into playing Brutal Legend I'd seen the game's opening some 10+ times. Everyone in my house jumped on and started up their own game, and then when friends rolled around, we couldn't resist showing off Tim Schafer's triumphant metal-inspired beast.

With this in mind, Brutal Legend really is the complete gaming package. It has compelling gameplay, great art-direction, a soundtrack to die for, lovable characters, an intensely engrossing story, tight, comedic scripting, excellent voice-acting, a sprawling world unlike anything you've ever seen and quite possibly the best presentation for a videogame ever. In fact the sum of its parts create one of the most enjoyable gaming experiences I've had in a long time - it's amazing that at one point in its development cycle Brutal Legend's future was uncertain.

You play the role of Eddie Riggs, a roadie for the band Kabbage Boy, a pop-metal act who have no idea what real music is. Eddie's role behind-the-scenes sees him as one of the best in the biz - he knows how to build great stages, fix and string guitars and when needed, clean up behind the boys. One fatal night, however, he's crushed beneath his own creation, spilling blood onto his belt-buckle - a buckle given to him by his dad which apparently has magic powers. Suddenly Riggs is no longer in the present, and finds he's been transported back to an age where heavy metal was the overall life-force and he somehow now has magic powers of his own. 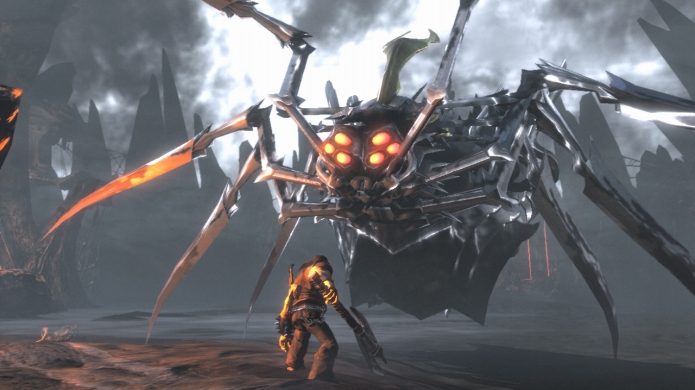 From the absolute outset you know this game is going to be good. It intros with Jack Black walking 'you' into a record store to check out an ancient metal vinyl, which then becomes your menu (this is the best videogame menu ever conceived, by the way). Starting up the game also invites you into the game's comedic styles with immediate in-game options to see all the gore you want, or have it toned down as well as either bleeps over the game's swearing, or the full uncensored gamut. Once your game tone is set, things kick off with incredibly funny scripting and voice-acting until Riggs is killed and you find yourself in the land of heavy metal.

The first 10 minutes or so then sees you learning the ropes and meeting one of the game's key players, Ophelia. Once your tutorial session is done though, you have an inviting open-world to begin exploring behind the wheel of your 'Deuce'; a seriously rad hot-rod replete with nitro, plenty of chrome and an all-important 8-ball gearstick.

In your car, like the GTA series, you can listen to the game's extensive and awesome soundtrack, represented as a tape-player by the sound made when switching tracks, and you unlock new songs by completing missions or finding them as relics around the game-world. 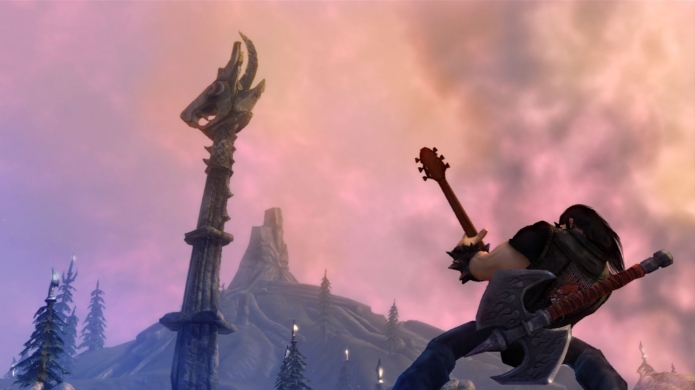 Eddie has his trusty guitar, "Clementine", which in this time harbours magic power and can raise long-lost relics with a simple solo. Solos are played in a similar fashion to Rock Band in that you only need to hit corresponding buttons on your controller to match those on-screen. His guitar is also used to summon the Deuce, perform devastating attacks or buff friendly AI during battles. Early on, you'll start building an army with the recruitment of head-bangers, but eventually you'll have a whole host of classes to help in your quest.

And boy, is this one serious quest. In the world of Brutal Legend, a small army of humans are fighting an evil overlord called Doviculus (voiced brilliantly by Tim Curry). On the side of evil you'll first confront one of Doviculus' minions in the form of Lionwhite (a play on the glam rock band, White Lion and voiced superbly by Rob Halford of Judas Priest), a pompous general whose army consists of fishnet-wearing long-haired glam head-bangers. It's the world of metal versus everything else wrong with music, which as you may have already guessed, eventually leads to fighting emo/goth baddies spawned from "The Sea of Black Tears". Brilliant.

What's interesting about the play-style throughout Brutal Legend is you not only have your obligatory third-person action/adventure moments with exploration, combos, power-ups and the like, but you'll also partake in real-time strategy play sections that require you to harvest 'fans' through acquired merch booths. You can upgrade your 'stage' which, depending on your fan number, then allows you to create various battle and support units. You have a 'load out' maximum of 40 units per round, but given many of them will die on the battlefield, you're constantly respawning units in order to keep the tide of battle in your favour. 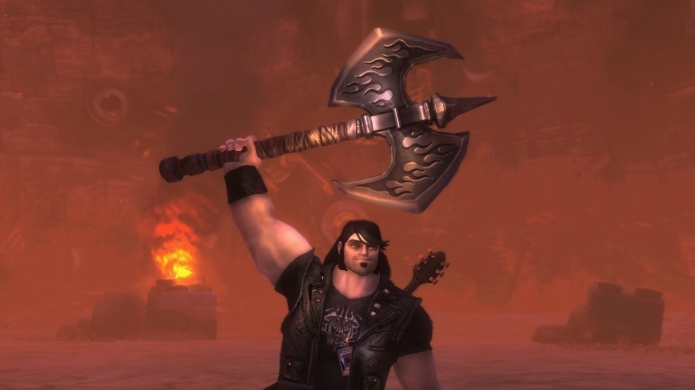 In these sections, Eddie takes on a demonic form with wings, which allows you to zip around the battlefield and control your units with ease. It's an amazingly well-adapted combat idea that borrows just the right amount from RTS games without being too convoluted or contrived. It's also the game's main basis for multiplayer, which is really it's own beast and just another reason to won it.

All of these battles are narrative-driven, so you can't start them whenever you please, but they're a nice break from the overall formula, and something utterly unique in this type of game.

The game-world itself is split up into different areas, which eventually open up the further you progress through the story. But you're going to find yourself traversing through snow, jungle, grassy plains, desert and more. The variety is excellent and each and every area comes with an unbelievably distinctive look thanks to the game's stellar art-direction, and you'll often find yourself just sweeping the camera around to look at your surroundings, oblivious to the required gameplay at hand. 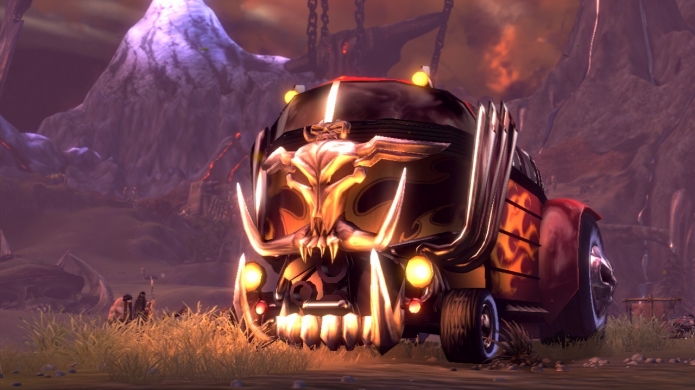 In a world based on heavy metal lore of yesteryear, there's almost nothing missing from the game's visuals, or its narrative. Chrome plants spew forth from the ground beneath you; the sky is dizzyingly full of ominous clouds, ecliptic suns and moons, lightning and more. Grotesque beasts roam the land (all of which you can ride) and huge stone statues litter the countryside. You'll see several stone henges in your travels as well as evidence of a gigantic race of "Titans"; the land's inhabitants prior to human infestation. Even the leaves on certain plants are shaped as hands performing 'devil horns'. And in some of the game's darker, more brooding sections, things are insanely twisted, as if sprung from the diary of a madman.

There is simply so much lore here, and it's all tied together in a way I never thought so much varying iconography could be. You're almost always sure you're looking at an album cover, or at least the inlay art of heavy metal records - and all of this is exemplified by the accompanying soundtrack which serves to maintain and solidify the game's core foundation: everything here is metal.

The character Eddie Riggs is also a breath of fresh air. He's not a reluctant hero, and there's no task he's positive he can't perform. In our world, he's lost to what's perceived as metal now, but transported back in time, everything is exactly how he's always wanted it. There's no 'square-peg' syndrome to his actions or demeanour, and Jack Black has done an unbelievable job bringing him to life - it was a role I'm sure he was born to play. 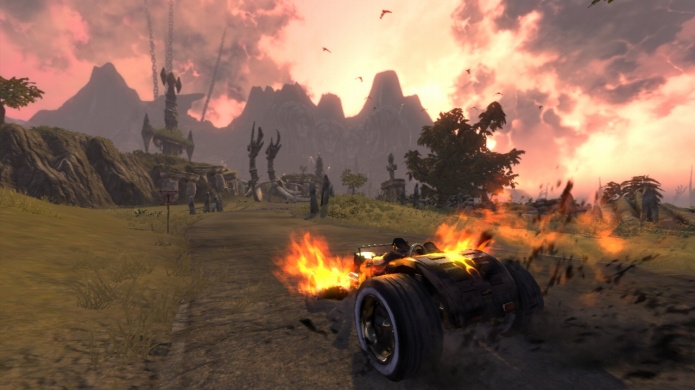 You're looking at around eight or so hours to finish the game's narrative start to end, but that's through avoiding all of the game's side-quests and its exploratory value. All tolled, I've logged a serious 15+ hours, and with the game's encouragement you continue to explore the land once you've finished the story, I can see myself spending a whole lot more time here. There's a hint of more to come, but whether that's in the form of DLC or a fully fleshed out sequel, we'll just have to wait and see.

From a critical standpoint, there really isn't a lot to complain about here. It's not necessarily a visual benchmark for pushing graphics engines, but that's more than made up for in art-direction, and it's a more than competant visual outlay anyway. The game-world is massive with tonnes to see and explore, though I only wish Eddie weren't so susceptible to death by water - there're tantalising islands off in the distance that just scream exploration.

The only other drawback I could see for the game is if you absolutely hate metal, or have no sense of humour whatsoever, otherwise this is an unbelievably fun gaming experience with an excellent story, great art, stellar music and some seriously cool gameplay ideas. If you haven't checked it out yet, I highly recommend you do. \m/
Latest Comments
Link