It’s always awesome to see the growth of a brand beyond “risk” to utterly “backable”. This is the case with Gearbox Software’s Borderlands IP, a game that sprung up out of nowhere and pitched the ludicrous idea of marrying RPGs (and a bit of the MMORPG) with first-person shooters.

In 2009 I reviewed the first game, scoring it a respectable 8/10 because its four-player co-op offered up one of the most visceral and engaging multiplayer experiences around. The score, then, wasn’t higher because at its core the game lacked a few components to make it an all-round must-have. It’s fine to assume everyone has three other videogame friends, but the truth of the matter is, not every does, or at least not everyone can tee up the time necessary to book a weekend away with buddies in the Wastes of Pandora. Moreover, beyond looting and boss hunting, the game lacked any real drive to reach the end, from a narrative perspective, and so felt a little thin on the ground, despite everything else it obviously did right.

Fast forward three years and Borderlands 2 is on everyone’s lips. The IP has hit the big time and Claptrap is now an unforgettable part of gaming culture. Gearbox has had ample time to listen to the feedback from their first outing and address everyone’s concerns while also ramping up everything that made the first game great, and thankfully that’s exactly what they’ve done.

So let’s start with the good stuff. You have four classes again, each similar to the previous game and each varying enough that you’ll never feel like you’re approaching the game the same way twice when you decide to load up another avatar. There’s a greater emphasis on aesthetic customisation here too, with new skins and heads being thrown out in loot drops, and most of these are decidedly geeky in reference (Kick-Ass and Teenage Mutant Ninja Turtles, I’m looking at you). There’s no in-game buffs for any of this, but given you only really see your guy or gal in the third-person during vehicular moments or at the Home screen, it’s not a huge deal. The same can be done with your vehicle, but again, there’s nothing rewarding beyond visualisation for toying with the system.

Customisation then comes with weapon augmentations, what shields you use and so on. The great thing about this is with each loot drop you get an immediate comparison stat list to give you the best information against what you already have on your person. And while it could have been pulled off in a binary fashion, the variations in each item’s stats means there’s always going to be give and take with everything you pick up. Some shields, for example, will have a hugely high defence stat, but will take ages to refill once depleted, while smaller defence shields can be refilled much quicker. All of this leads to a greater emphasis on player approach, allowing for most members of your eventual party to have different play-styles, creating groups of a far more dynamic nature (unless you run into someone who has the exact same everything as you -- an event highly unlikely).

Most loot in groups is shared, and the game follows pretty much the same rules as the original in how XP is dished out in these scenarios. In fact, from a co-op perspective, not a great deal has changed (fundamentally) -- a true testament to what the team clearly got right the first time around. 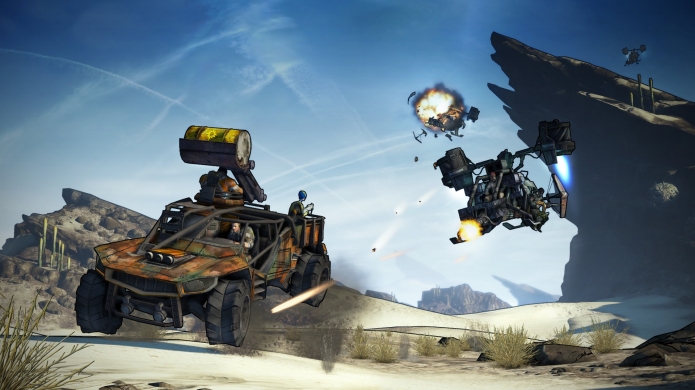 This leaves the lacking components of the first game as fodder for the retooling, and like the proverbial better loot-drop, Borderlands 2 comes packaged with stronger stats in both the single-player solo area, and its subsequent driving narrative. There’s actually a decent story here this time, and I’m hard-pressed to remember a villain quite like Handsome Jack in my recent videogame history. Moreover, Gearbox has been mindful to not forget their roots, and a lot of the events from the first game appear to have made an impact on Pandora, switching up your second trounce through its barren tundra.

But that’s another point. While Borderlands 2 maintains the idea of Pandora’s “Wastes” (based on its narrative foundation), it’s far less arid and empty. There’s always something to explore in the sequel, and life just seems to teem more here. Even NPCs have routines now, and while they might still be as wooden as ever in the personality department, it makes a mountain of difference to the first game to be able to walk into Moxxie’s and see actual game-world characters doing stuff.

Out in said Wastes, the game’s outlanders (good and bad), bandits, bosses and wildlife also up the life-thriving ante for the game, creating a much more challenge-oriented trek between and to destinations. Unlike other RPGs, Borderlands 2 doesn’t scale environments or enemies to your level, which means you can revisit earlier areas and absolutely decimate the ever-respawning bad-guy populations. This is a good thing because there are often new side-quests you discover, or just hooking up with a lower-level co-op pal (you cradle-snatcher you), which can send you back into everyman’s land, so it’s nice to be able to go into an area and know you’re going to absolutely own everything in your path.

Other cool new features also include a Challenges manifest, completions of which means you’ll earn Badass Points, which can in turn be applied to your character[s] for permanent upgrades. This is another facet of customisation, specifically in how you approach the game, but one that is default by nature. That said, I did ignore it for a full-day session once, only to realise, jump in and have a treasure-trove of Badass Points to apply to various character attributes. Skill points are also rewarded each time you level up, with obligatory skill-trees on offer to add to the player customisation route.

But it’s not all peaches and cream. I mentioned before about heading back into areas you’d already visited, and while it can be fun doing so at a higher level, it can also take absolute ages to trek the required path into, and out of, these. You can Fast Travel at specific stations throughout the game, but these are spread out in various locales often unhelpful to your traversal quest. Even a simple system like World of Warcraft’s Hearthstone to teleport you back to Sanctuary, at the very least, would have been a very welcome addition.

There’s also a question of stealth, in that there is none. You can set up a station for yourself outside an enemy stronghold, pull out your sniper rifle and take a pot-shot an unsuspecting goon, but as soon as you do that, almost every enemy there will descend upon your like locusts. This is especially annoying when playing as the Assassin whose very class description would have you believe you can stealthily take out the enemy (and sure enough, his ability does give you a chance to sneak up behind enemies, but not in the way you think). It’s not a huge detriment to the game, and the inclusion of far more robust cover in level-design means you can deal with mobs pretty easily, but I definitely would have preferred enemies to have a more line-of-sight aggro, as opposed to the x-ray vision they all apparently have.

Obviously the biggest draw for Borderlands 2 is in its co-op though, and as I’ve already mentioned, you honestly won’t be disappointed. It’s the additions then, of enhanced customisations, greater player-rewards, more loot, more enemies and enemy-types, animated zones and NPCs, a much more vibrant visual delivery (it’s a stunning game, really), a more tangible (and dislikeable bad-guy), a greater story and more challenge, overall, that makes this not just one of the year’s best releases, but a benchmark for the action-RPG world.

Borderlands 2 is a FPS/RPG fusion the rest of the videogame development world should stand up and pay attention to, because Gearbox has backed a real winner in this IP. A must-buy.