Car racing, as a genre, doesn't particularly interest me. I don't find Forza or GT attractive and while I did spend that one racy weekend with PGR2, I have no feelings for the Project Gotham series either. What I do get hot and bothered over are the few racing gems that turn up every so often and put the “Yeah!” back into “Shit Yeah!”. Allow me to reminisce:

Super Mario Kart. She wasn’t my first, but she was the first to show me how much fun racing could be. Oh, the things we did with shells and mushrooms. Such hi-jinks might seem pretty tame by today’s standards, but back then, that sort of thing just wasn’t done.

The next to hold a special place in my heart was Ridge Racer Revolution. The only place I'd seen such glamour before was in dimly lit establishments where you'd lay down your hard-earned for a brief performance, sullied by the cheers of lecherous spectators. When I finally had a beauty like that all to myself, I drifted along those curves for a week straight.

Some time later, I hung out with Burnout 2 on a few occasions, which is how I met Burnout Takedown. She was the roughest I’d ever experienced. Such a destructive nature. The sparks flew, let me tell you, but each encounter left me a wreck. And now Blur comes a courting. Will Blur earn a place in my little black racing book? Will she entice me to take up pole position once again? Let’s explore. 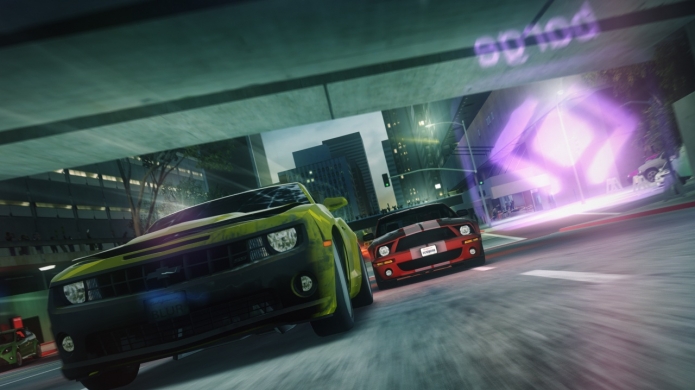 You progress through the career mode by earning lights and fans which are basically medals and experience points respectively. Placing first, second or third will earn you five, four or three lights. If your various actions on the track are suitably impressive, you’ll earn fans. The more skill you display, the more fans you earn. Reach the fan target for a race to earn yourself an extra light. There’s another light available for triggering and completing the light gate run for each event. If you haven’t been counting, that’s a total of seven lights up for grabs in each race. Collecting lights unlocks more events and accumulating fans unlocks cars.

Events are grouped under rivals. Select a rival and up comes a list of events. Race in the events, earn lights and unlock more rivals. To challenge a rival in a one-on-one race and hopefully win their car, you’ll have to complete certain goals while racing in that rival's set of events. These goals include things like wrecking a certain number of cars, earning x lights in event y, or inflicting damage with certain power-ups. “Power-ups? Tells us more of these power-ups.” Happy to. 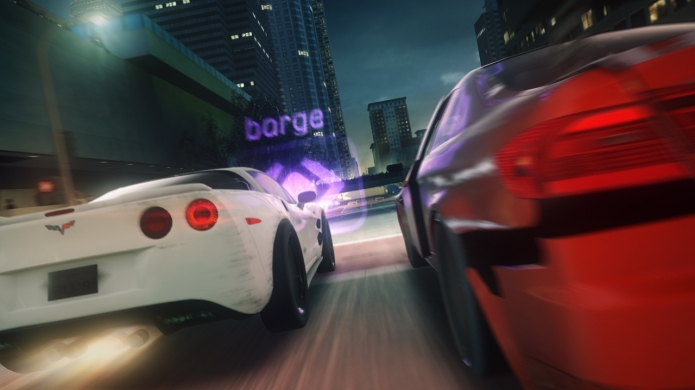 Power-ups are the crux of the Blur experience. Like multitudes of kart racers, you collect power-ups as you race around the track and then unleash them upon your opponents.

The power-ups Blur has on offer are as follows:
Shunt - A homing missile that slows targets by sending them into an explosive somersault.

Bolt - Gives you three high-velocity rounds that will induce a mini spaz-attack (Can we still say that? I’m pretty sure we can’t say that. ~ Ed.) and slow your enemies. You'll want to land all three shots on the one target for maximum effectiveness.

Barge - Sends out a 360 degree shockwave from your vehicle, perfect for knocking opponents out of your way and into immoveable objects/obstacles.

Shock - Launches three “lightning domes” out in front of the race leaders to hopefully slow them down and let you catch up.

There’s also Nitro, Shield, Mine and Repair which are all self-explanatory. 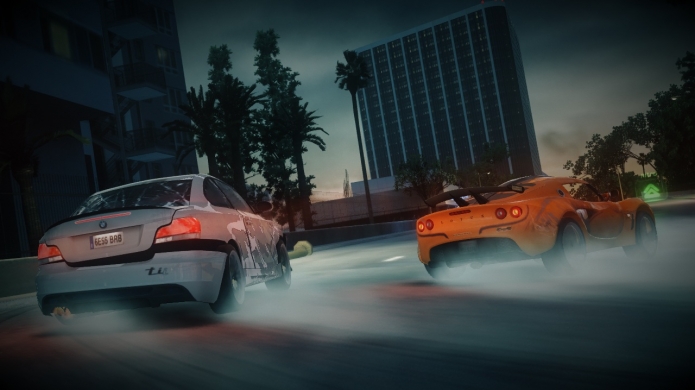 Most power-ups can be fired forwards or backwards and have offensive and defensive applications. If you have a Shunt closing in on you, activating a Barge will destroy it. You can carry up to three power-ups at a time and scroll through them with the X button which is handy if you’re saving that Shunt especially for xXxn00b_Kill3rxXx who pipped you at the post last race. Take enough damage from offensive power-ups and your car becomes a wreck, but this doesn't mean you're out of the race. The hand of God will toss you right back in there with a shiny new car, though it will cost you valuable seconds.

In the interest of strategy, the placing of the power-ups isn’t random. Specific power-ups appear in particular locations on the track. You can see them as you approach and aim for the power-up that will be most useful given your current situation. Race leader getting too far out in front? Change your racing line to pass over a Shock. Jostling for first place? Get yourself a Barge and knock that sucka off the track.

If this all seems a little too complicated, don't worry. There are brief video tutorials every couple of races to ease you into it and provide a few pointers.

You'll be doing your racing in one of the sixty-two licensed cars available, ranging from high-performance street cars to rugged off-roaders. Choose well your car for each track or you'll end up looking like a jack-ass, being overtaken by Hummers as you grind through the dirt in your Audi. While you're off-road you can hear flung-up stones impacting the inside of your wheel arch which is a nice touch. Controller rumble is used to great effect, and damage to cars can not only be seen but heard. Seeing sparks spray from your vehicle and hearing your displaced panels scraping along the asphalt is an unmissable reminder that you need to pick up the next Repair you see.

Have you played Modern Warfare multiplayer? No? What are you, a WoW nerd or something? Well for those of you who have, Blur's multiplayer reward/challenge system is a dead-set rip-off of that found in MW. And that's fine by me. Almost every action you can perform on the track is tallied and you're rewarded once you pass certain milestones. You can also unlock upgrades for cars by completing the challenges set out for each. Now, I know this is no new concept to you RPG aficionados, but adding these challenges to a racing game makes a potentially frustrating experience far more rewarding. Didn't come first? No worries. You won some fans for that sweet boost jump you pulled off. Have a new car. I don't come first place first very often and so I quite like the idea of rewarding a player for their effort rather than their performance. It's all about the fun, after all.

I found races over Xbox Live to be a wee bit laggy at times, but it never really became an issue. The matchmaking system is on par with modern shooters and overall, Blur's online experience far surpasses that of any other racing game I've played.

Bring up the pause menu during a race and you can select Photo Mode which allows you to photograph the action surrounding your vehicle with a fully controllable, flying camera. You can even tilt the camera on its side like you is gangsta. Pressing the Y button displays the effects menu where you can adjust the brightness, contrast, saturation, even shutter angle and aperture. Unfortunately, invisible walls box the camera in too tightly and the Auto focus is too shallow, preventing you from keeping more than one vehicle in focus unless they are close together. I hope these issues are addressed when Bizarre are tweaking this feature for Blur 2. It would have been nice to see a replay feature, present in so many other racers, from which you could enter Photo Mode. It’s just not convenient to pause in the middle of a frantic car battle to take a happy snap. This also means that you can’t capture stills demonstrating your multiplayer prowess which are the very screens you’d want to grab.

If you’re the type of annoying twit that simply must tell people exactly what you’re doing while you’re doing it, you can tweet or Facebook your activities in Blur with a few simple button presses. (Not including the half an hour it will take to actually enter your message via the on-screen keyboard.) However, from what I could see, all tweets from the game will be appended with “- I’m playing #Blurthegame”. I guess Activision doesn’t have much of an advertising budget and needs you to do your part. 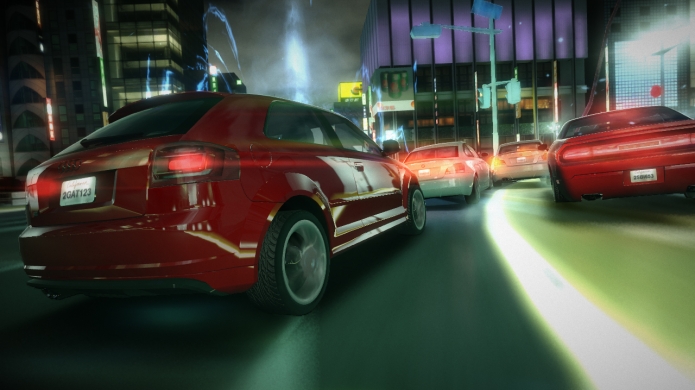 There are also gamer pictures and avatar rewards to unlock if your skills are of bill paying calibre. I like the idea of unlocking avatar rewards ‘cos I’ll be buggered if I’m paying for them. $4 for a virtual shirt just so I can dress up a virtual doll? I could be buying real doll’s clothes with that money.

Blur is a hectic, super stylish racer that is loads of fun. It's part Mario Kart, part Burnout and part Modern Warfare. What more could you want from a racing game? Hardcore fans of racing sims may not be impressed given Blur's decidedly arcade approach to racing, but most people will have a ball. Highly recommended.

If you have love (and cash) enough for two, I recommend you also check out Split Second. Regretfully, I am yet to get my grubbies on it myself, but if Metacritic is anything to go by, it's a worthy rival to Blur.
Latest Comments
Link