There's no hiding the fact that, while the Xbox 360 has enjoyed insurmountable success around the world, it has yet to make even the smallest dent on the Japanese market. But it's not as if Microsoft haven't been trying. In fact, even on the original machine, the smaller controllers came into play as a direct response from Japanese consumers complaining about the size of the original Xbox controller, and Microsoft also went to a number of lengths to secure a handful of Japanese-driven titles they thought would help raise the console's stance in the Land of the Rising Sun. Unfortunately, try as they might, they just couldn't crack the Eastern market. This time around, with the Xbox 360, they've stayed the path and have secured a number of exclusive titles for the system they're hoping will peak the interest of Japanese gamers, but it's an uphill battle (as they learned last generation), which is why they're beginning with a super group project called Blue Dragon. 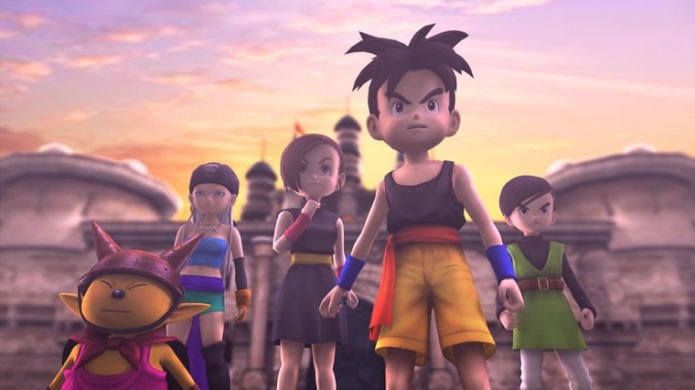 I say "super group" because the key forces behind Blue Dragon are three individuals who's names in the RPG/anime industry in Japan are massive. Hironobu Sakaguchi, the game's producer, is most famous as the creator of the Final Fantasy series while the game's character designer, Akira Toriyama, is famous for creating the Dragon Ball series (as well as monster designs for the staple Japanese RPG, Dragon Quest VIII). Finally, Blue Dragon's composer, Nobuo Uematsu, has written soundtracks for some of the most beloved Japanese RPGs including Chrono Trigger and Final Fantasy VII. On top of all this, the game has also been developed by Artoon, a dev studio made up of ex-Sonic Team members as well as ex-members from other major studios from around Japan - see, super group.

Yet with all of this in place and sounding as though anything produced by these guys would redefine the genre, Blue Dragon comes out looking less than passable as a RPG. There is almost no life in the game and you're constantly being told what to do, how to do it, and why it's being done. At no point are you ever overly left to your own devices and as such the game not only comes across as patronising, it almost feels like a Fisher Price toy - something along the lines of "My First RPG" comes to mind.

The story sees three children from a village, Shu, Kluke and Jiro, attempting to stop what they call the "Land Shark" from devastating their home anymore. Kluke's parents were killed by the beast (represented by a huge rock-caked dorsal fin), and it periodically comes back to wreak havoc upon the villagers - the only warning: a massive plume of purple smoke.

The three children do manage to slow the beast down in a trap however, but while arguing and talking about what to do next, the shark breaks free and they're dragged away. Eventually it comes to a halt and the three find themselves deep within a cave riddled with "ancient ruins" (which are, typically of Eastern RPGs, advanced machinery). Somehow the three continue their journey by entering the Land Shark (which actually turns out to, itself, be an advanced piece of machinery) and are thrust skyward to a city in the clouds.

Once there they meet the game's antagonist and learn some denizens of the game-world harbour a magic that summons a beast in their shadow. Forced to take this on themselves, the three swallow Light Spheres and lo and behold, they each earn a beastie to store in their five o'clock. Shu (the game's main, main character) gets a Blue Dragon, Kluke a Phoenix and Jiro a Minotaur. For the most part you'll play the game with these three as the main party, but you will meet others along the way who'll help you on your quest. 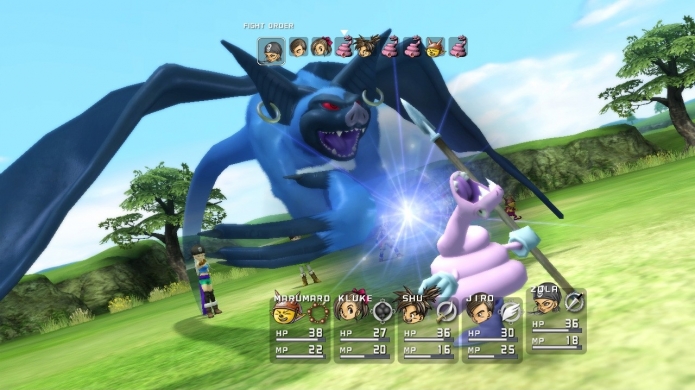 Questing, as it were, however, is as simple as moving forward, fighting the game's many monsters and searching tree stumps, rocks and chests for treasure and items. Unfortunately there is nothing at all compelling about the story barring a need to stop the mechanical monsters from destroying the simple homes and villages of the people not living in the city in the sky. There are no sub-plots, no tangent story arcs involving NPCs or members of your party ergo there's nothing beyond the main quest, which, while there, offers almost nothing to really get excited about. Even levelling up your character becomes a mechanical action throughout, and you'll find that about 10 hours into the game you've fallen into a hypnotic routine due to the fact the game's pace, direction and overall style haven't really changed since the one hour mark.

Combat is the only element of the game that offers something unique to the world of RPGs in that, as opposed to random battles, you can see each bad-guy in plain site and if there is more than one in front of you, a pull of the right trigger will bring up a circle that represents your area of reach, if you manage to have a few monsters in this area you can choose to battle them individually or all at once, and if two of the monsters are natural enemies they'll instigate a "Monster Fight" where they battle each other and not you, making your job a little easier. Beyond this though, anything you learnt in RPG school will be a lesson here, too. This is a shame, because, I don’t know about you, but once through school was enough for me.

Visually Blue Dragon does a lot of things right. The depth of field blurring and the overall polish on the characters and environments sometimes makes the game almost look Pixar-ish in quality, however, while spanning a massive three disks, you'll still encounter slow-down and choppy frame-rates, which given this isn't actually pushing many visual limits (it's pretty, but there isn't much going on), just shouldn't happen. Moreover, while having a name like Uematsu involved may have seemed like a great idea, the soundtrack throughout is unimaginative and repetitive, and be warned: the first boss fight you come across - expect that track to play on a loop until the monster is beaten, and then for every boss battle thereafter.

Blue Dragon should have been a masterful game given who was involved, however, almost nothing here is worth talking highly of. There are far more compelling and enriching RPGs available still on the GBA, let alone any of the other consoles. You almost get the sensation Mistwalker (the super group mentioned earlier) just pocketed the cash and delegated everything else to Artoon - I wonder where the money went then? Karaoke or strippers...
Follow Us
Latest Reviews
More...
News Feed
Advertisement
Latest Threads
Log In
Create Account | Lost your password?