Never underestimate the endless amusement of a simple thing that's well designed. In Blood & Truth, a VR renaissance of the lightgun genre, this manifests as a dedicated 'spin your pistol' button. You hold circle on your Move controller, give your wrist a flick and become Billy the Kid. I can honestly say that twirling magnums, glocks and machine pistols never got old when I was John Woo double-fisting them. This is it. I've found my gaming equivalent of Homer Simpson and his drinking bird.

Let's get the plot of Blood & Truth out of the way early, even though it's of little consequence. Though it never rises to the greatness of a Guy Ritchie script, what we have here is basically a cockney-gangster flick with VR controls. You play the disembodied hands of one Ryan Marks, a highly-skilled special forces operator who is pulled off the line when his old man croaks. After level one, what was looking to be a generic shooter set in the Middle East does a complete backdrop swap to the capital of ol' Blighty. You know: fish, chips, cup 'o tea, bad food, worse weather, Mary fucking Poppins... London. 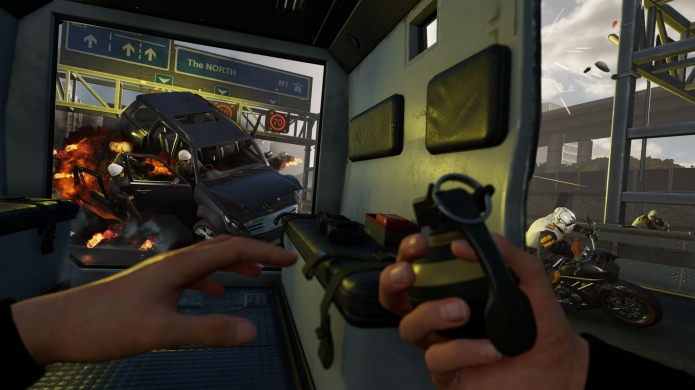 It's revealed early that Marks Sr. was a made man. His criminal enterprise must now fall to his wife, his daughter Michelle, older son Nick and you, the obvious choice as an enforcer. Unfortunately, before you can say “five minutes, Turkish” your world is turned upside down for a second time when local gangster Tony Sharp stages a coup. It quickly becomes apparent that this small-time East Ender is being bankrolled by a serious international crew. Possibly “zee Germans”, Tommy.

"I can honestly say that twirling magnums, glocks and machine pistols never got old when I was John Woo double-fisting them."


Even though the Marks family is hopelessly outnumbered and outgunned, if the milk turns out to be sour, Ryan ain't the kind of pussy to drink it. Thus triggers a passable revenge tale that's quite short at only four hours runtime. Fortunately, gunplay and making you feel like John Wick is where Blood & Truth impresses the most. Your time will be evenly spent on interactive exposition scenes, and payback missions that start out as Bond infiltrations but devolve into a bad day in Bosnia. 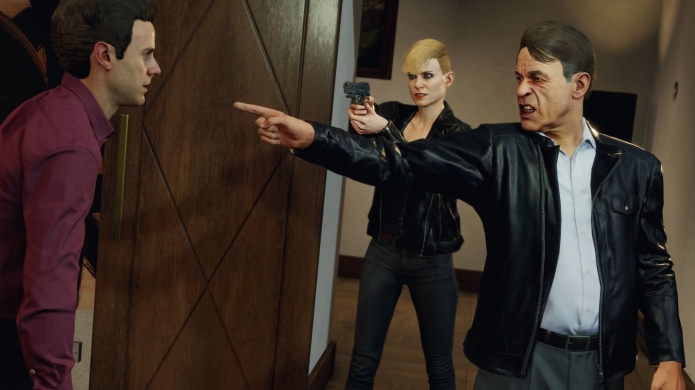 Before each shenanigan you're given a chance to poke around the Marks family safehouse – to tool up, or act like one as you throw incidental objects around the room. At the gun range you can customise a growing number of boomsticks, either by hosing them down with a spray bottle or physically snapping on accessories (unlocked by collectible mission ‘stars’). Once you've slapped on a silencer and sights, you'll need to kit yourself out by physically filling up four holsters. You have two homes for sidearms that orbit your invisible hips. You can also clip two long weapons on either shoulder by reaching and pulling the trigger.

I want to tell you that the above system works flawlessly but it's not quite 100%. When the chips are down in a firefight (sometimes literally, as you're ducking behind roulette wheels in a casino) your virtual hands can get confused in these tighter areas. Occasionally I'd go to grab a replacement clip that sits on Ryan's chest pack only to have the game think I was doing otherwise. Sometimes I wouldn't snatch a new mag at all, I'd just fire a round over my shoulder. Other times my assault rifle would get swapped for a hip located pistol resulting in me getting killed once or twice. 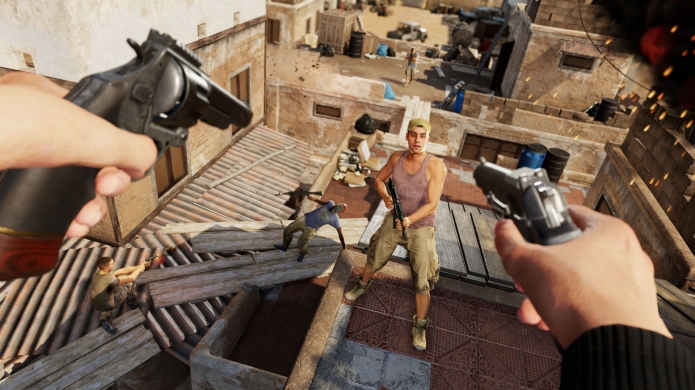 Those peccadilloes aside, when Blood & Truth fires on all cylinders it's an immensely enjoyable experience. Being a big fan of Doom VFR, I was initially annoyed that this first-party title didn't support Sony's frankly awesome Aim Controller. However, I learned to make do with the simple node-based movement system that offers basic strafing when you're under fire. You're also offered a primitive choose-your-path system that warrants replaying levels to take the road not traveled to scoop up hidden collectibles or to shoot marksman targets you missed.

"Gunplay and making you feel like John Wick is where Blood & Truth impresses the most."


Whichever way you look at it, SIE London delivers big on wish fulfillment here. Squinting down a reflex sight or a sniper scope to nail a headshot feels sublime, as does ripping the tab off a grenade and pelting it into a gaggle of shit-talking geezers. The “there-ness” of VR has a weird power to take the most blasé action moments in gaming and elevate them to grin-worthy awesomeness. I've done slow-mo door breaches and highway shootouts to death over the decades, but the magic of VR makes these chestnut set-piece moments feel fresh and incredibly cool. 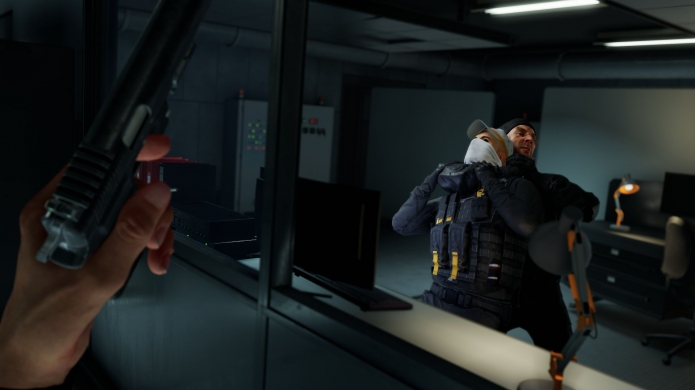 Even the simple traversal moments that sound boring on paper can give you a thrill when the headset is on. You'll be mesmerised by stuff like doing hand over hand climbing on the side of a skyscraper, tinkering with a lock, brute forcing an electrical system or reaching out to grab a handhold to prevent falling to your death. It's even cooler when you're attempting some of the above one handed, because your other mitt has a grenade launcher in it that's pumping explosives into an approaching heavy. Hell, even chambering a round by physically pumping your shotgun feels bad-ass.

The only thing holding back this package from must-own status is the short duration of the main campaign. That's supplemented with the score attack nature of trying to replay the action missions to earn stars for better gun attachments and weapons. You also get a time attack mode and a handful of challenge missions that put you in a police trainer environment with a preset array of firearms. Shredding targets like you're Johnny Utah from Point Break is only fun for a little while. It loses its “woah” factor pretty quick.

"Squinting down a reflex sight or a sniper scope to nail a headshot feels sublime, as does ripping the tab off a grenade and pelting it into a gaggle of shit-talking geezers."


When Sony released the PSVR with the PlayStation Worlds teaser experience, every gamer worth their salt gravitated to the London Heist mini-game. Blood & Truth takes that short yet fantastic proof of concept and fleshes it right out into a showcase that's well worth a buy for any PSVR adopter. While I don't think this dethrones Resident Evil VII as the king of PSVR experiences, Blood & Truth is very much like one of my loved ones when I have the headset on – within striking distance.
Latest Comments
No comments currently exist. Be the first to comment!
Commenting has been locked for this item.
Follow Us
Latest Reviews
More...
News Feed
Advertisement
Latest Threads
Log In
Create Account | Lost your password?