In fact, alongside BioShock and BioShock 2 Remastered, GOG.com's Winter Sale has some 1900+ deals with same games available at 90% off. Other major titles with significant savings as part of the Winter Sale include The Witcher III: Wild Hunt Game of the Year Edition (60% off), Thronebreaker: The Witcher Tales (20% off), Divinity II: Original Sin Definitive Edition (35% off) and Hellblade: Senua's Sacrifice (50% off) among much, much more.

Here's what GOG.com shared with us officially:

BioShock™ and BioShock 2™ emerge from somewhere beyond the sea, dripping with that claustrophobic atmosphere of decay, corruption, and human ambition gone wrong.
Widely considered as the gold standard for story-driven shooters with light RPG elements, they have been remastered to feature higher resolution textures and models, director's commentary, and several other additions that ensure time will never wash them away.

Both games are joining the Winter Sale line-up with a 75% discount until January 3. And while we’re on the topic of big savings, there are +1900 games on sale including …

Don’t miss Daily Deals - the best offers you can find available for 24 hours only. Check back at 2:00 PM UTC every day for eight new games you won’t otherwise find in Winter Sale.

Unlock free games while you shop in the sale: get Fantasy General free with your first purchase, and EVERSPACE once all your Winter Sale spendings add up to $15.

Note: BioShock™ and BioShock 2™ on GOG.COM are available in Remastered versions. The original ones will be added as a free bonus at a later date. 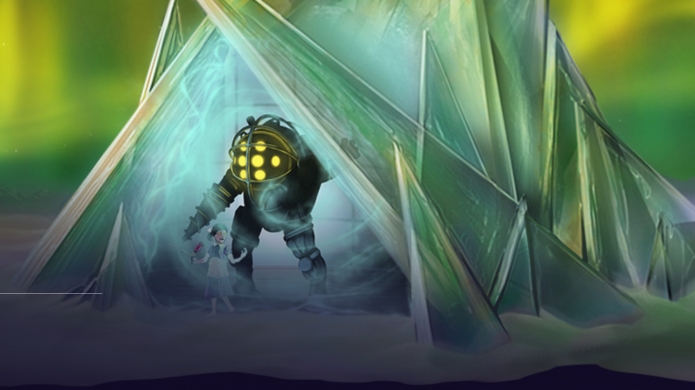 After revealing that Irrational Games' 2007 BioShock would be making its way to iOS devices earlier this month, publisher 2K has today announced that the slimmed down mobile port is now available for purchase.

Priced at a whopping $18.99 on the iTunes store, the mobile game features all of Rapture in its gritty, underwater nature, with some tweaks of course. These include a new UI for those fingertips, optimised touch controls and support for bluetooth controllers.

Bringing a true AAA gaming experience to the mobile platform, BioShock sends players on an adventure to explore the submerged Art Deco city of Rapture to fight deranged survivors of a failed objectivist utopia, and genetically modify their own DNA to gain superhuman powers. The game also features a new leaderboard system, an in-app digital artbook (based on the original Special Edition), and a new player profile function that allows players to see how they stack up against their friends with a number of personal in-game stats that track how many weapons and plasmids are used, the number of enemies killed, and more.

If the price doesn't put you off, you can check it out through the iTunes store over here. Note that BioShock for iOS is only compatible with the following devices: iPad Air, iPad Mini 2, iPad 4, iPhone 5S, iPhone 5C, and iPhone 5 - and will sadly not run on older devices.
Tuesday, 5 August 2014
Original BioShock Announced for iOS, Based on Xbox 360 Version
Post by Eorl @ 09:34am 05/08/14 | 1 Comments

Yes, that headline is indeed correct. 2K Games has announced that Irrational Games’ 2007 classic BioShock is being ported to iOS devices – in its entirety, and with no in-app microtransactions – later this year.

A number of sites were able to get a hands-on look at the rather unique title on iPad, noting that the framerate for the game was somewhere below 30FPS. The hands-on previews also noted that while some graphical and interface compromises are made based on the hardware, the game does deliver on the cinematic experience that made the original PC and console releases so popular.

Rapture itself retains much of its gritty, underwater utopia nature, with all enemies seen in the original release present on the mobile version. IGN noted that a pair of thumb touchpad controls would dynamically re-align their centers based on fingertip screen presses, with 2K also noting that some aim assistance was added.

Pricing details have yet to be released, but going by the more premium titles recently launched on mobile devices we can expect between $10 to $20. 2K also noted that third-party mobile controllers will also work for the iPad and iPhone versions. There are currently no plans for an Android release.
Monday, 7 May 2012
BioShock Film Adaptation Still on Irrational's Agenda
Post by Steve Farrelly @ 02:02pm 07/05/12 | 8 Comments

Gore Verbinski was at one time slated to direct, but with the deal falling through, the BioShock film adaptation is still under water. That doesn't mean the project has been canned though, and specifically, Irrational's Ken Levine is "still focusing" on making it a reality.

"The thing with Gore [Verbinski] didn't work out," Levine told Edge (via Videogamer). "But there's no such thing as 'it's finished' when it comes to making a movie out of something. It's always about the stars aligning. We're still focussing on it, but it hasn't consumed us so much."

Obviously that team currently has their hands full finishing off the highly anticipated BioShock Infinite, but it's nice to know an enticing film project like this hasn't sunk to the depths yet.

Film blog Indiewire (via: Gamasutra) is reporting that in an unrelated interview, Director Juan Carlos Fresnadillo confirmed that he is no longer attached to the BioShock movie -- first announced in 2008.

"To be honest, by now, I’m completely out of that, and developing other stuff," he said. "Right now it's on hold. The studio and the videogame company, they have to reach some kind of agreement about the budget and the rating."

The 28 Weeks later director was already the second choice for the job, taking over back in 2009 from Gore Verbinski.

Back in November 2011, Irrational Game's head Ken Levine was quoted as saying they "don't have a need to get it made", stressing that it would have to be "a good representation of the game". That being the case, and given the troubles it seems to have had with budget and R-rating logistics, it's probably for the best that the whole thing seems to be shelved for now.

2K Games have revealed PS3 owners eagerly awaiting the revamped and updated version of BioShock will also come with a challenging new gameplay mode called "Survivor". According to reports, this mode will reveal tougher, more menacing enemies, and Vita-Chambers will revive you with far less EVE. (You can still choose to play with the Vita-Chambers of, which of course, would make the mode even more challenging, but there's an unlockable Trophy for those you give it a shot).

BioShock for the PS3 is already said to have a bunch of improvements over its Xbox 360 and PC counterparts and is being developed by 2K Marin, who will also be handling development duties of BioShock 2. You can check out more on our BioShock game page.
Follow Us
Latest Reviews
More...
News Feed
Advertisement
Latest Threads
Log In
Create Account | Lost your password?