Being aware of your situation is a hell of a thing. Not only does it give you discourse, recourse and whatever else course you want to add the fray, it gives you vision. In the situation of this review, I have all the knowledge I need, given I’ve actually finished BioShock Infinite. The statement of completion here is an important one, because understanding, fully, the breadth of Irrational’s work with Infinite requires one heck of a commitment, and when the dust settles and the credits roll, you’ll know that every inch of your committed fibre has been touched in ways you never thought possible with videogames.

If I could post up my review notes for you, as a timeline of events in the game, I would. But at some point I stopped writing, and not because I ran out of things to say. The point here is that at some juncture, BioShock Infinite ceases to be a videogame. It ceases to allure you with its myriad systems, top voice-acting and unbelievable art-direction by crossing lines no one else would dare to cross. And it’s not because it tries. There’s no forced effort here, Infinite becomes what it is because it is -- a facet of the design philosophies at Irrational Games that naturally elevate the studio above their peers. In fact, the game’s first boss encounter is the sort of crescendo most other developers only dream of finishing their work at. 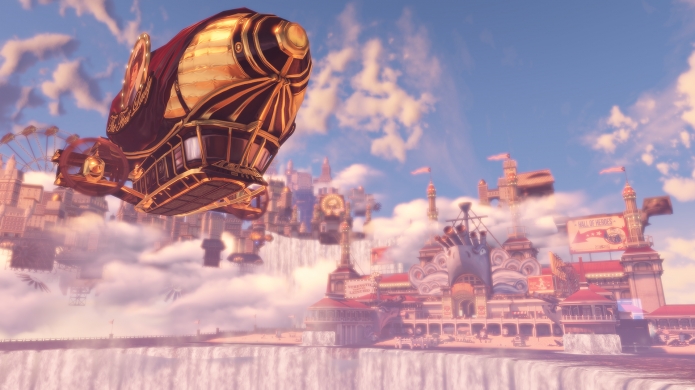 But “the crescendo” is another point to my not finishing my review notes, and to be totally honest, I didn’t care about notes, or reviews, or scores, when the game’s grand finale played out. I’ve not experienced a more touching final act in any form of media than this, and it’s an important part of the package. You could have played the original BioShock to within an hour of its ending and still got what it’s about, but Infinite demands your undivided attention and requires your heart, because at some point in your ascension, it rips it out.

But enough about the game’s ending. It’s a stretch to get there anyway. By my count, playing on PC, on Hard difficulty, I knocked out the experience in some 16 hours, and that’s without the full exploration of everything the game-world has on offer. Not to discount all of that, but again, at some point story just overtakes your journey and DeWitt’s debt foreshadows your sense of reason to a point that you don’t even realise you’ve taken the red pill and navigated half the rabbit hole already.

As a shooter, to bring everything back into review perspective, Infinite is the cream of the crop. It streamlines the basis of powers and progression the first game already managed so well, making its combat second to none. The Skylines throughout add a component to play not seen in any videogame before it and they’re unnaturally easy to master. You’ll wonder how games of this nature, prior to this, ever did without the transport system at hand, and you’ll hate any minute you’re not able to just jump on them. And Infinite is good in that way. You’re not the ultimate master of your domain here, you’re tasked with unwrapping an unyielding tale, and straying from that wouldn’t just break the game, it would break the universe as well. 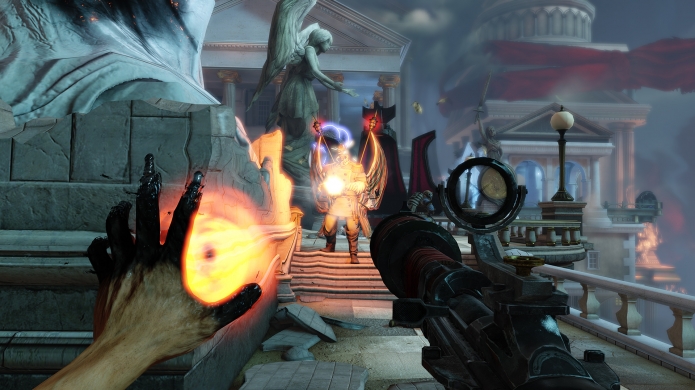 You may have seen the temporal element of the game in trailers, and I’d be remiss to not mention Elizabeth’s ability to open “tears” in the game-world. These are often used in combat where you can pull in cover, ammo, weapons, automated turrets and more, but they also come into play to open up the game-world for expanded exploration. Initially I was worried these “tears” would be the game’s major gimmick -- the cheap throw-in to make combat seem more visceral without actually doing anything, but I couldn’t be more wrong. There’s nothing binary about your options, and how you use and exploit each tear will change -- and explode -- the way you’re playing. They’re such an important part to recourse that it tears me up inside to also let you know that they’re the reason for everything.

Memories of level-design, art-direction and player progression from the first game wouldn’t be out of place here, and again, much of that is now streamlined in Infinite. It doesn’t dull or ‘dumb’ the experience, but rather expedites the player input component of the game. There’s more RPG here than before, but it never feels like you need to be watching, or paying attention to, numerical-based systems. The game is playable in its entirety without ever once changing your attire for different buffs, and selecting weapons should be based more on preference than on necessity. And for the old-school shooter fans out there, I should mention the shotgun making a glorious return to form in Infinite, because it’s bloody fun to use.

And “bloody” is a convenient term to segue to my next point, which is that the game takes no prisoners where maturity is concerned. What’s interesting is, that as jarring as the whole thing can be at times, it’s never overused, and handled tactfully all the way through. Elements of race, sex and even torture come into play, and can’t be overlooked. From a narrative perspective, despite the Pixar-like visuals throughout, Infinite is unbelievably dark, and if you consider the visual direction of the first game, it’s a triumph on the studio’s part to have even pulled off such an horrific experience like this, looking the way it does. Don’t get me wrong, Infinite has plenty of classic Irrational horror moments riddled throughout in aesthetics, but as a package, the game simply delivers one of the bleakest, brightest games of any generation, ever. 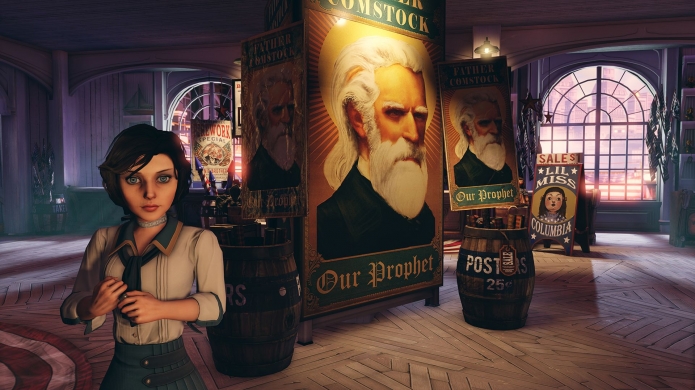 So finally we’re at the closing point of my review; the point where I’m left to conclude this masterpiece -- but I’m stuck. I don't know how else to tell you that this is the game videogames were made for. It’s the game every other designer wishes they could make. It’s a watershed moment for our industry, and I’d be hard pressed to tell you that anything that came before is better. More so, however, I can’t imagine that anything else, in my lifetime, will top this. All bold statements, I know, but this is it and I’m reviewing it. BioShock Infinite is the sort of game we dream of reviewing. It’s the Ocarina of Time of this generation (only infinitely better), and will be talked about and analysed for years to come. But only if you take Booker to his end; only if you see his task through; only if you help him erase the debt. A debt that, come the credits, you’ll never forget.
Latest Comments
Link