Warning. This piece is full of Bioshock-related spoilers. Please note that this includes both Episode One and Two of Burial at Sea.

When a game’s setting is strong and everything comes together, from the art direction to the architecture to the mixture of fictional and non-fictional elements, the end result came be quite striking. Both the original Bioshock and its successor, Bioshock Infinite, had incredibly realised settings. The latter of which took place in a fantastical city above the clouds, Columbia, which blended a truly wondrous mix of turn of the 20th century design, American colonialism, race, politics, and of course, science-fiction.

The early parts of the game were probably its strongest, as players took on the role of Booker DeWitt, a detective travelling to the land of Columbia in search of a girl. As Booker, players got to spend considerable time just taking in the sights and sounds of Columbia, watching buildings sway gently through the clouds, checking out weird monuments of the founding fathers of America, and even watching people go about their daily business. It was so visually and thematically rich that once you had to actually start running and gunning down enemies, the realisation that ‘oh, this is also a shooter’ felt like a bit of a disappointment.

Apart from and over reliance on cluttered action set-pieces it’s safe to say that story-wise, the end of Bioshock Infinite got a little heady, confusing, but mainly, commendably ambitious. It included a minor detour from the city in the clouds setting of Columbia to the water logged underwater domain of Rapture (as seen in the original Bioshock) in an incredibly powerful sequence that seemed to shout ‘hey, it’s not just in the name, these games actually take place in the same universe!’ Or an adjacent one, or through one of those slider portals that Jerry O’Connell and the dwarf from Lord of the Rings jumped through at the end of every episode of ‘90s sci-fi relic Sliders.

So these weren’t separate stories after all, or maybe they were, or they existed together, or side by side. A great big multiverse full of Zachary Comstock’s and Andrew Ryan’s living together, messing things up for everyone else. So yeah, things got a little heady and confusing. Burial At Sea, the two part campaign DLC for Bioshock Infinite, serves to bridge the gap between the original Bioshock and Bioshock Infinite even further, with the majority of the time spent in the former’s location of Rapture. It’s bold, ambitious, and a more than worthy addition to the Bioshock universe, or multiverse, as it were.

Much like the opening moments of Infinite, the opening moments of Burial At Sea put players in the role of detective Booker DeWitt in search of a girl. The setting however is different, so this time players get to explore a small section of Rapture, still bustling with activity and objectivist propaganda. To call it visually striking, immersive or even impressive would be to sell this realisation of Rapture short. Apart from collecting money and eating various foods, there is little to do other than to take in the sheer detail and excellence of the art on display. But even so, much like the opening moments of Bioshock Infinite, this still proves to be quite a memorable experience.

This is very much content strictly for fans of the series, and those who are well versed in the various players of not only Bioshock Infinite but the original Bioshock as well like Andrew Ryan, Sander Cohen, Frank Fontaine, and so forth. The story sees a version of Booker looking for a missing child with the help from a version of Elizabeth, the two protagonists from Bioshock Infinite, transplanted to the world and setting of late 1950s Rapture. Episode One puts players in the role of Booker and does well to keep the narrative focussed as a somewhat detective story set within Rapture as he keeps uncovering more and more details not only about the case but himself too.

Not before long this naturally leads Booker to locations full of genetically crazed splicers where the combat plays out very much in the same vein as the fights seen in Bioshock Infinite, but with a more limited number of plasmids/vigors to work with. Strangely, the pacing of Episode One seems to be identical to the first few hours of Bioshock Infinite, with new powers and abilities being dished out incrementally, which makes the end feel somewhat abrupt by simple virtue this fact, and not due to it only being a few hours long. The ending of Episode One is quite dramatic, with the sort of cliff-hanger that only the best episodic content can pull off, something that raises many more questions than it answers.

Episode Two begins with players taking on the role of Elizabeth, a welcome change of pace that not only changes how the game is fundamentally played but in how the story is told and ultimately concluded. As a piece of episodic content, Episode Two works much better than Episode One mainly because it does away with most of the stuff like the upgrade and skill progression systems ripped directly from Bioshock Infinite and replaces them with more streamlined and suitable variations. In terms of combat the focus is shifted completely to a stealth approach thanks to a new plasmid/vigor called Peeping Tom that lets Elizabeth go invisible and see through walls to spot enemies.

Armed with a crossbow that can put splicers to sleep individually or as a group, Elizabeth can also sneak through ventilation systems and sneak up behind enemies to take them out silently. This introduces a new type of combat, or lack there-of, to the Bioshock franchise that feels both natural and well overdue. Structurally this means that the overall pace is slowed down to accommodate this new approach, and consequently Episode Two feels like a much larger and more comprehensive experience compared to Episode One. In terms of setting it picks up right after Episode One finishes with Elizabeth still in Rapture, still in search of the missing girl. 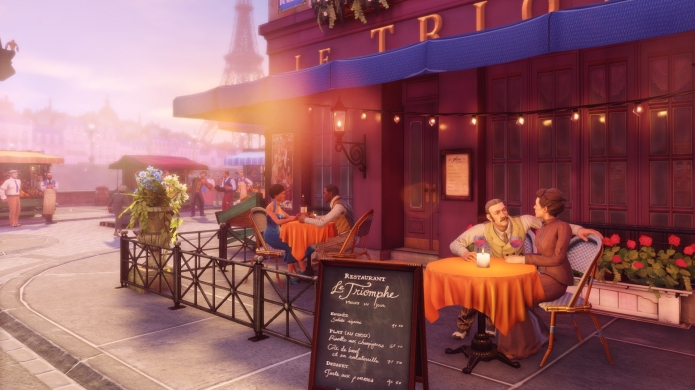 However, unlike Booker’s journey to find the girl, Elizabeth’s is anything but a simple detective story. In the grand tradition of Bioshock Infinite’s impressively confusing, ambitious, and astounding ending, Episode Two attempts to take it one step further by connecting and intertwining the events of both the original Bioshock and Bioshock Infinite into one singular story. In terms of success, that would come down to personal opinion, but the execution is nothing short of a commendable feat. It’s the sort of stuff that makes you wish more game narratives and settings contained even a small portion of Bioshock’s creative expression.

With severe cuts made to Irrational Games, the studio behind the Bioshock franchise (which has been reported as an internal decision), Burial At Sea serves as a sort of swan song for the series in addition to being a brilliant addendum to Bioshock Infinite. The weaker aspects of that game, which were limited to repetitive and dragged out combat sequences, are virtually absent here thanks to the relatively short nature of Episode One and the stealth-based approach of Episode Two. In terms of narrative it’s as dizzying, exhilarating, and divisive as the series has always been, arguably providing some of its most memorable sequences yet, and for fans it’s something that not only has to be experienced, but savoured.
Latest Comments
Link