There’s a style of open-world design that feels a little too on the nose, where it’s hard to think of anything other than the word ‘filler’. And that’s not said with any sort of deeper meaning at play, or as a means to begin a lecture into the very nature of time, the player, and the interactive medium we call games.

It’s quite literal, the sort of thing that would bring a smile to a room full of Ubisoft executives. Oh that? That’s number 1 of 6 do-dads to collect. That over there? That’s number 4 of 9 of that other thing to collect. Coming from a relatively small THQ Nordic in-house studio, as an expansive action-RPG in the vein of a modern day fable (and Fable), Biomutant is ambitious. Commendably so. 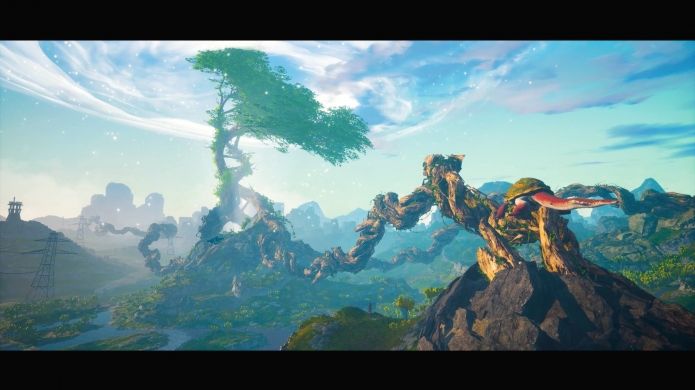 Okay, so it’s not that there are simply too many side-quests that exist in the chore realm that is ‘find x of x’ in Biomutant’s large open-world. Nor is it that weird videogame thing where you’re inexplicably told how many of these random old timey televisions are out there in the world to find and repair. It’s the fact that these side quests are rarely, well, conducive to Biomutant’s strengths as an RPG. And as such, are as interesting as the ‘x of x’ description.

"... with a number of cool things to discover throughout Biomutant, it’s a shame so much of the world is numerical, uninteresting filler."


Biomutant isn’t the first game to do straight-up chore-style side quests, nor will it be the last. It’s just that with a number of cool things to discover throughout Biomutant, it’s a shame so much of the world is numerical, uninteresting filler. There are maybe 20 of these side quests all up, multiplied by x, so you end up losing count.

The flip side to this is the genuine surprise that comes from helping a fellow cute and fuzzy restore a mech, a controllable biped that you can customise with different bits and bobs and top it off with either a duck or dragon head. The same goes for finding a weapon part with elemental damage that you can then tinker with to try and make work on a new one-handed blade or automatic rifle. Each integral in helping you rid the Life Tree of another big bad Worldeater. 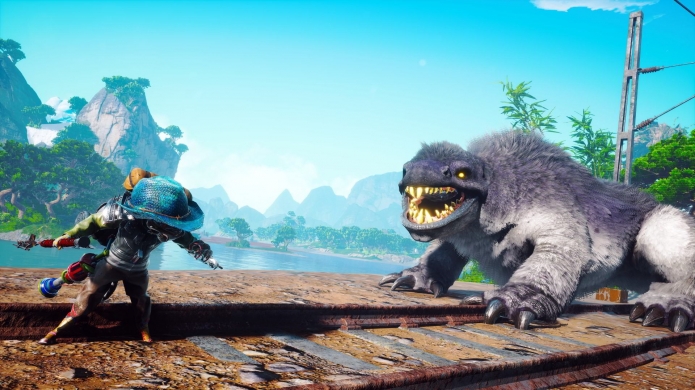 For lack of a better term, the sentient game design overtakes what makes Biomutant fascinating - it’s world, the characters you meet, and how they can exist alongside the engaging combat, crafting, and customisation.

With each washing machine to restore or dusty globe to spin following the same ‘match the colours or lines’ puzzle, thankfully there’s usually a bright orange or red glow coming from a nearby cupboard, crate, or other storage thingy. Biomutant’s strengths lie within its pure action-RPG-ness.

When the checklist stuff is actually connected, via loot, it’s perfectly fine. That Ubi crack from earlier was mostly just that, a crack. Finding those sweet mech or aquatic vessel parts in Biomutant is ‘find x of x’ done well. Like a modern day Assassin’s Creed or the recent gem Immortals Fenyx Rising. Context is key. 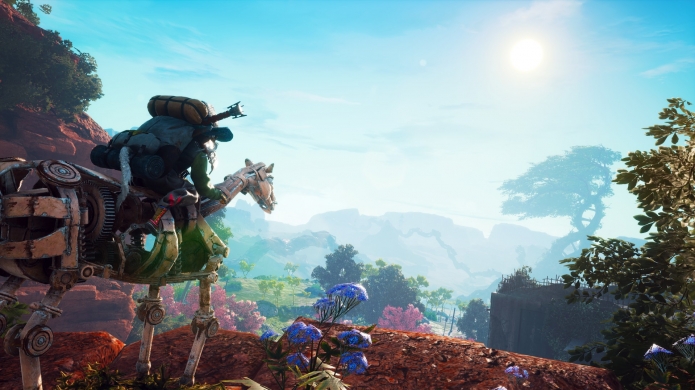 With its post-apocalyptic setting, one centred on the idea that all of the planet’s cute and furry animals have mutated into Kung-Fu fighting tribes long after humanity has died out, Biomutant leaves a positive first impression. From the detailed character creator that lets you customise a furry little dude to take out into the world, to the opening moments that present a world in peril.

"Biomutant leaves a positive first impression. From the detailed character creator that lets you customise a furry little dude to take out into the world, to the opening moments that present a world in peril."


It’s a small thing, but the way the camera pans around your hero as you take control for the first time from within the character creator (with no additional loading) is wonderful. And from there the inviting and vibrant world you immediately see carries with it a sense of history. The art direction, the animation, the way combat and exploration is fast and fluid, it’s great. Even the made-up words for things from the ‘before time’ -- our time -- are fun.

It doesn’t take long for Biomutant to falter. The first hour or so being linear isn’t really the problem, nor is it that nothing in the environment is destructible or more than a platforming obstacle at best. That last bit in particular conjures up the thought of playing a Rare game from the N64-era, like Jet Force Gemini. Or something released during the height of the Xbox 360 generation. 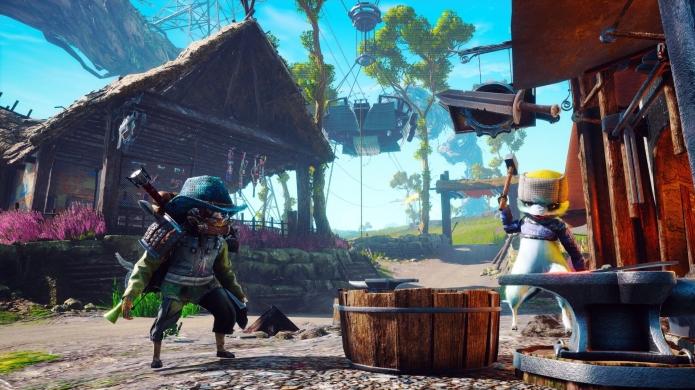 It’s just that there’s very little outside of the core action-RPG stuff -- that is combat, character customisation, changing weapons and finding new gear -- that’s executed in a way that fosters the need to keep going. The story, including all dialogue exchanges, is narrated storybook style. And in a way that’s both annoyingly allegorical and expositionally bland. So much so that simply knowing this is how it’s going to be for the duration of Biomutant’s lengthy adventure saps the life out of just about every character interaction, no matter how strange or interesting it might seem.

So yeah, that comparison to N64-era Rare dries up pretty quick too.

Biomutant’s narrative ambition, to tell a story about morality and empathy and how that's intrinsically tied to history and the land on which everyone lives, suffers because of this presentation. 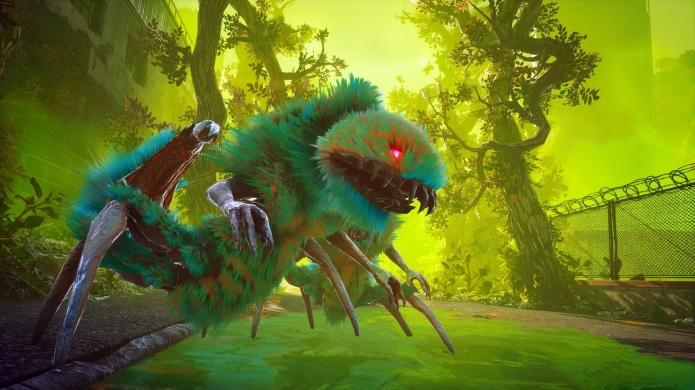 Where Biomutant comes alive is during its many third-person, fast-paced combat encounters. Armed with a melee and ranged weapon the simple setup slowly morphs into a pretty great little action-RPG thanks to the intuitive, complex, and rewarding crafting. The sort of thing where you can take a toilet brush and combine that with all manner of add-ons to turn it onto a fearsome flaming wand of destruction. The charm comes from being able to make out that it’s still a toilet brush.

"The story, including all dialogue exchanges, is narrated storybook style. And in a way that’s both annoyingly allegorical and expositionally bland."


The blend of long-lost artefacts with that of the various furry inhabitants’ spotty understanding of what’s what, shows character in an otherwise bland world of activities to complete. Thankfully it’s a great foundation on which to create some surprisingly deep tinkering. It’s a shame that Biotmutant kind of glosses over this part of the experience, which can lead to a number of fights feeling drawn out and a case of chipping away at slowly moving health bars. However long it takes to get enough gear to sit down and craft something new and worthwhile is the real hurdle leading towards genuine enjoyment. 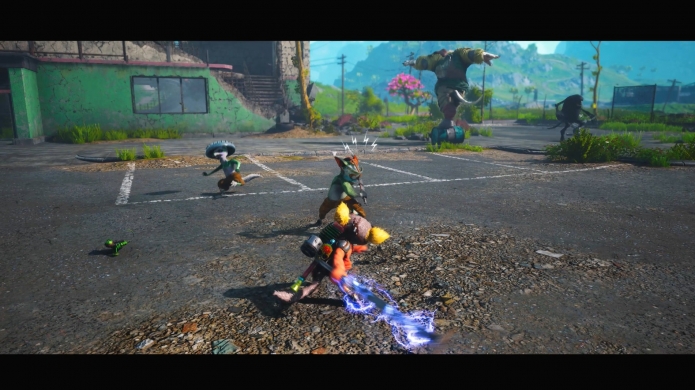 Exploring the often beautiful world makes sense when the more you see, the more dangerous an off the beaten path location you visit might be, the better the gear you’ll discover.

It’s not that all other elements of Biomutant are bad, again, they’re either not all that well executed or too bland to warrant any sort of reaction. Okay, so there is one outright bad system, and that’s the Fable-style good or bad decision-based stuff visualised by your character’s bickering conscience. Not only does it feel tacked on but it lacks any sort of nuance.

In fact most good or bad decisions are presented and described in a way that’s a variation on “I think being nice is nice '' versus “Let’s do some real bad stuff cause bad stuff is bad”. Outside of the narrator, the only characters given voice are your character’s light and dark shoulder-bound cherubs, and they never feel like actual characters.

And really, that sums up Biomutant. An ambitious open-world action-RPG from a new studio that does a lot, but doesn’t do a lot very well. In the end it’s finding new weapons and gear, alongside using new mutations and abilities in combat, that resonates. With less filler and more Kung-Fu killer, this could have been so much more -- with less.
Latest Comments
No comments currently exist. Be the first to comment!
Follow Us
Latest Reviews
More...
News Feed
Advertisement
Latest Threads
Log In
Create Account | Lost your password?