A few weeks ago if you would have asked me what the hell Binary Domain was I would have looked at you blankly and spouted “Que?” Certain games are on your radar from day one, others sneak below it and some just up and appear almost out of thin air with little or no fanfare. This is one of those titles. With absolutely no idea of what to expect or what I was in for I whacked this sucker in and I’ve got to say, I was shocked Cotton. Binary Domain poses some interesting Asimovian questions on the nature of robotics and humanity, how the chasm can be bridged and does so in a magnificently B-Grade action-movie setting that works far better than it should.

Set 70 years into the future, after catastrophic population losses caused rising sea-levels and global warming (Gore was right!), new cities built on the decaying foundations of the old world thrive. It’s a timeless story with the rich getting richer and the poor getting poorer. To survive, mankind has embraced a robotic labour force (with shades of Battlestar Galactica, I Robot and The Matrix peppered throughout) with America emerging as the new global superpower – what a shock. 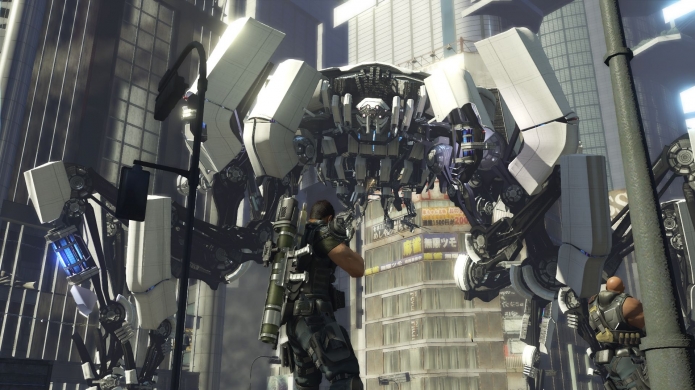 In an Asimovian twist the New Geneva Convention is formulated prohibiting the manufacture of lifelike robotics and any such creation or robot with an itchy trigger finger gets dealt with by a Rust Crew, a team of special operatives dedicated to turning wayward electronics into scrap metal. When sentient and indistinguishable humanoid robots or “Hollow Children” reveal themselves, exhibiting true emotions without even realising what they actually are, a crack Rust Crew comprised of operatives from all over the globe is sent to battle this emerging ‘terrorist’ threat, which of course originated in Japan, home of the technologically advanced.

Combat is ripped straight out of the Gears of War playbook with D-Pad weapon changes, roadie runs and slipping into cover, though the mechanics didn’t allow for moving around corners which seemed an odd misstep. You decimate and destroy waves upon waves of killer robots that are pretty decent bullet sponges. The way their armour and casing peels off makes it all feel more visceral and violent than it actually is. Shoot the legs off and they’ll crawl after you Army of Darkness style and try to rip your gizzards out, for example.

You’ll be able to give your squad (varying in size from two to five members at any given point) rudimentary commands along the lines of “cover me”, “charge”, “retreat” and “fire” and the AI does a pretty decent job of it. It also supports six languages worth of vocal commands that work rather effectively if you’ve got a headset handy and makes you feel like even more of a badass as you spit commands to your team. You can even call them to give you a med-pack if you’re downed, which is a pretty neat trick and helps you manage your resources. The only real fault is that they tend to stay right on you particularly when you’ve snapped to cover, often getting in your way which can have negative repercussions. 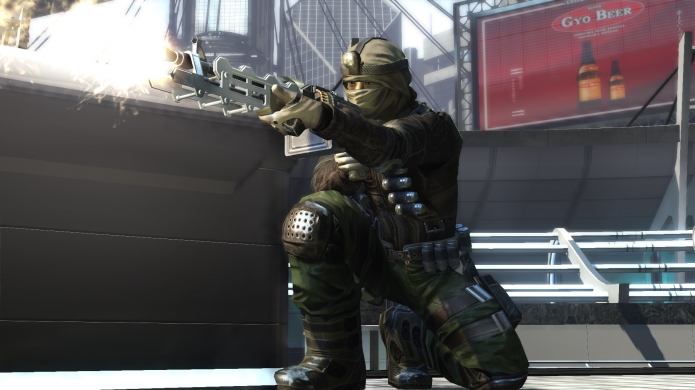 You see, you’ve got to manage your team, pack them lunches, tell them they’re pretty and no, their butt doesn’t look fat in those jeans and say all the right things to keep them on side, that’s where the Consequence system comes into play. The more reassurances, positive conversations and uber-aggressive combat behaviour you exhibit (particularly double and triple kills), the more “trust” you earn and the more readily they’ll respond to your commands.

Alternately, be a dick, abuse them or melee and fire at them constantly and you might just find yourself bleeding out mid firefight. It works well for the most part except for the annoying tendency they have for running directly into your line of fire and then chastising you for being the asshole firing on them.

Each team member is an action movie cliché from the massive African-America bruiser, the snarky MI6 operative, the wildcard Japanese freedom fighter and the sultry and soft spoken Chinese specialist sniper to name a few. Special mention goes to Cain, the French heavy-duty robotic gunslinger with awesome Pepe Le Pew accent and Wild West attire who constantly praises your magnificence. He was an immediate addition to my squad and I wholeheartedly urge you to make him a regular to yours.

As fun as the combat was, there were some ‘brain-fart’ moments that defied explanation. One particularly at the beginning of Chapter Three, during a chase scene with robotic hordes swarming around you in the air or in turreted chase vehicles, you have a robotic driver who must have his AI set to retarded as he manages to smash into every single barricade along the way with each skid disrupting and restarting the longest reloading animation in the history of gaming. 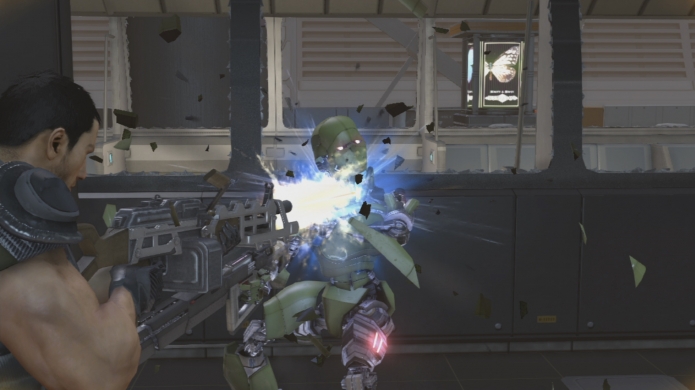 It is so brutally cheap it was baffling, particularly skidding on an open road with absolutely nothing in your way, merely to artificially increase the difficulty. I reckon I could pretty much manually reload a musket in real-life riding a wave-runner through Sydney Harbour mid-hurricane with greater ease. It took away any rhythm or flow making an on-rails section that should have been fist-bumpingly awesome ever so humdrum.

That said, there were many sequences where they absolutely nailed it, including a truly epic boss battle against a monolithic snake-headed, motorcycle-riding construct that took more punishment than all of Hollywood during a Ricky Gervais lead Golden Globe Awards opening. On the whole the boss battles were of the classic old-school variety, both challenging and extremely satisfying with the perfect level of beatable frustration.

After the end credits rolled on by I was genuinely shocked that I was still thinking about the core concepts of Binary Domain. What does it mean to be human? How do you define life and sentience? Can machines truly live? Usually if I get a sniff of games that try to pose these larger questions and dabble in morality and the nature of existence I head for the hills screaming. I’m much more comfortable giggling maniacally as I’m shooting stuff in the face, but something about Binary Domain stays with you. Maybe it’s the B-Grade movie styled wrapping that lulled me into a false sense of security and caught me unawares. Regardless, it was an unforeseen byproduct of this run-and-gun shooter and an unexpected bonus. 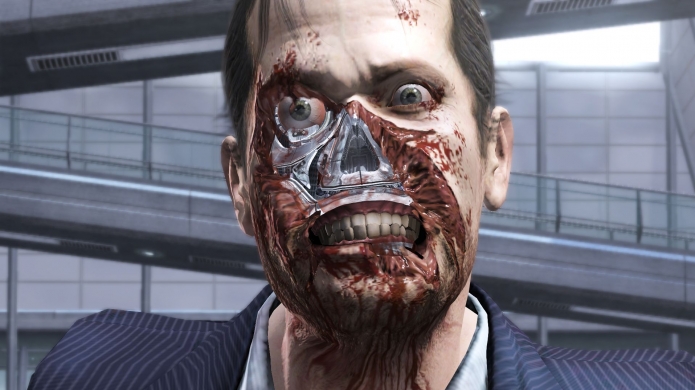 While the pretty much stock standard multiplayer (CTP, KoTH, TDM etc) and survival/horde modes handle quite well with class options mirroring the talents of your in-game cohorts the omission of co-operative campaign play is a huge oversight. I get that it was all about molding your team into a high-morale kickarse unit and focusing on “oo-rah America” lead Dan Marshall, but even slotting in one other player could have raised Binary Domain several notches up the points scale. It’s a blast and a half on your own and any title that much fun demands a co-op buddy to delight in the carnage and share in the balls to the wall action.

It’s rare that a title sneaks right up on you and offers intense visceral gunplay, an intriguing consequence system and poses philosophical questions that leave you pondering the possibilities once you put down the controller. Binary Domain manages to juggle these aspects rather well, not outstandingly or brilliantly, but compellingly enough that I found it hard to walk away and was determined to see it through to the end in as few sittings as possible. Take a chance and give this bad boy a go. You might just be as pleasantly surprised as I was.