For years I’ve thought entities like Animal Planet, Discovery and Nat Geo should be involved in videogames (I’m aware a lot of these types of shows are owned by the same parent companies too, such as History, A&E etc). The thinking was, with myriad experts and loads and loads of research at their fingertips, why couldn’t we play a game as a lion, or a shark, or a snake, or a mosquito, or a crocodile, or a dinosaur, or a saber tooth tiger… or any animal? And, if we could, wouldn’t it be awesome to represent these as educational games that breach the usual academic ceiling of such ventures in favour of a marriage between survival, instinct, puzzle-solving and light-to-heavy narrative.

In my head, the outcome would be educational across so many fronts such as in highlighting conservation, or in revealing unique biologies that could help humans in the future. Or just in history so we can better learn to understand the present, by dissecting the past without spoiling it in the real-world. We’ve seen how this can be implemented with Ubisoft’s brilliant “Discovery Tour” mode for both Assassin’s Creed Origins and Odyssey -- an interactive journey through history; fact and myth alike, where you control the information available to you, and dive in as deep as you like.

"With this in mind, Beyond Blue already talks a modern language without coming across as pandering. What helps sell this ‘goal’ is the game’s visuals are right up there with the best of them, when you’re on a dive..."


Beyond Blue from E-Line Media is set in a near future where exploration of the Earth’s oceans is far more advanced, and manageable, from a perspective of scale. You play the game as young marine biologist, Mirai (Anna Akana), whose specialty knowledge and love of whales and whale research has landed her the enviable opportunity to live in the oceans to study both these majestic creatures, as well as any and all marine life that comes across her path. 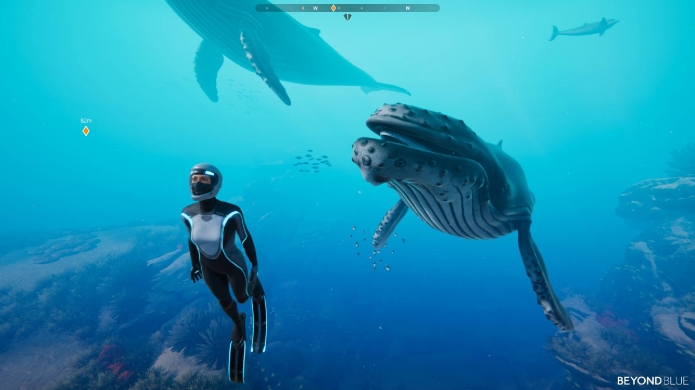 The game itself takes on a lite narrative which showcases the scientific world’s desire to reach an ever-connected, global audience, where Mirai and her dive and research team will perform live streams and share their discoveries and information in a meaningful way. With this in mind, Beyond Blue already talks a modern language without coming across as pandering. What helps sell this ‘goal’ is the game’s visuals are right up there with the best of them, when you’re on a dive. The closest thing to Beyond Blue currently out in the wild is the brilliant Subnautica, but where they differ is that one is an absolutely open, alien sci-fi fantasy and the other one is Subnautica.

Jokes. You get jokes.

In all seriousness, what does separate these two is that Beyond Blue picks its lane and sticks with it. Don’t come in thinking you’ll be free-diving the Mariana Trench without too much hassle. The game gives you mini ocean-floor sediment boxes to play in, and by play, I mean scan. Perhaps Beyond Blue’s biggest missed opportunity is in its presented gameplay loop, which is effectively a one-trick seahorse -- and it all centres around scanning. You scan for POIs, you follow markers to said POI, and then once found, you scan the POI. The whole thing is checklist at best, and while you do gain knowledge rewards for scanning, such as unlocking AR models of the scanned animal to look at on board your sub (a mini story and mission or ‘dive’ hub), the repetition of this loop is only upheld by the visuals and serenity around you. If it weren’t for the high production value of the game’s visual and audio makeup, Beyond Blue would be slammed more heavily for its lack of gameplay variety. 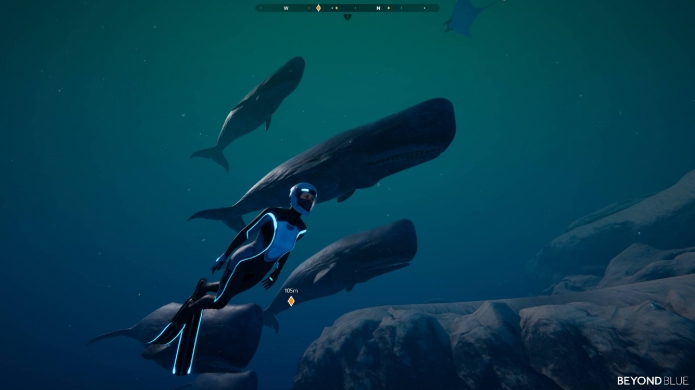 With that said, even after finishing the relatively short game, I did find myself coming back in to freedive and “scan all the things”. This, again, however, is a part of the game built on repetition. Most animals and grouped animals not tied to a story beat will be swimming goldfish circles in the same space. This makes finding them and crossing them off the aforementioned checklist relatively easy. The harder parts of the game in this setting are those in the darker, deeper parts of standalone sediment boxes. Here you’ll find things like brine pools, luminescent fish, ancient sharks and maybe closer cousins to the Kraken or its deepsea celebrity enemy, Moby Dick.

"And while I did mention it being lite-on, there’s a mini red herring (can’t stop, won’t stop) dangled long enough and allureing enough to want to know more..."


I mentioned earlier that the game comes with support from the Blue Planet series and OceanX, among others. And what this has allowed is for a full deepdive on ocean and marine life conservation. A lot of this is relayed in-game through Mirai, Irena and Andre’s conversations, but there’s also a full HD real-life video collection called “Insights” which is unlocked through performing certain tasks or pushing through the game’s story. And while I did mention it being lite-on, there’s a mini red herring (can’t stop, won’t stop) dangled long enough and allureing enough to want to know more. (Thank yourselves lucky I haven’t gone full Titleist where my fake marine biologist jokes and puns are concerned.) 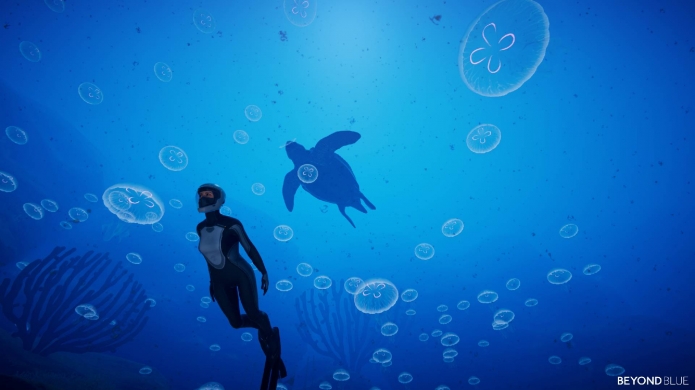 In the end, what you get with Beyond Blue is an absolutely gorgeous game brimming with life and deepsea wonder. It’s unfortunately shallow when it comes to gameplay and gameplay variation, but there’s a lot to still take away from the game and experience, not the least of which is in the game’s positive and hopeful message surrounding both conservation and community and cultural understanding. Such as learning that keeping turtles alive within certain indigenous communities for tourism and educational excursions, rather than cultivating them as a food source -- which if you weigh against the age of turtles, and the importance of that age -- is a massive win for all.

Beyond Blue comes with the visual and audio chops (the soundtrack, specifically during dives is fantastic). It teaches all the way through and stands as hopefully the first major release in a lean towards games more centred around raising real-world awareness for the sphere upon which we live, and share, with other species. And how we can best move forward in keeping and maintaining a healthy balance. More ‘videogame’ design around the above with some variety and maybe a lengthier campaign wouldn’t go astray in helping games like this crack into an admittedly crowded mainstream. But if you look at the success of shows such as Blue Planet, which had a heavy hand in Beyond Blue, and its roots, then there’s no reason a shift for media around the important topic of conservation and education can’t be towards videogames.