The first Bad Company was a nice departure for DICE from the norm, at least in terms of their single-player offerings. It served to offer up a tongue-in-cheek experience that took as many digs at popular action games as it homaged. But it was far from perfect. The destruction system needed some work and the set-pieces throughout lacked the same sort of punch as Infinity Ward's Call of Duty 4: Modern Warfare. Multiplayer, on the other hand, unsurprisingly offered a robust experience that was perhaps a little overshadowed by the multiplayer of the aforementioned IW title; and we've seen a gaming nation divided by these two ever since.

Well, that divide now has a clearer patch of green on one side - specifically populated by DICE thanks in large part to their dedication to dedicated server support. The peer-to-peer set-up Activision and Infinity Ward have opted for is something of a game-breaker to many, and while the server situation for Battlefield Bad Company 2 here in Australia is far from ideal, the sheer fact it exists has many people leaning closer to DICE's latest offering.

But before we delve too deeply into the multiplayer component of BFBC2, there's an even more engaging single-player campaign on offer this time around, proving DICE have adopted an evolutionary process in their development of the series, and while it's still arguably somewhat lacking in comparison to Modern Warfare 2, they still need to be given a "good job" pat on the backside for their efforts here. 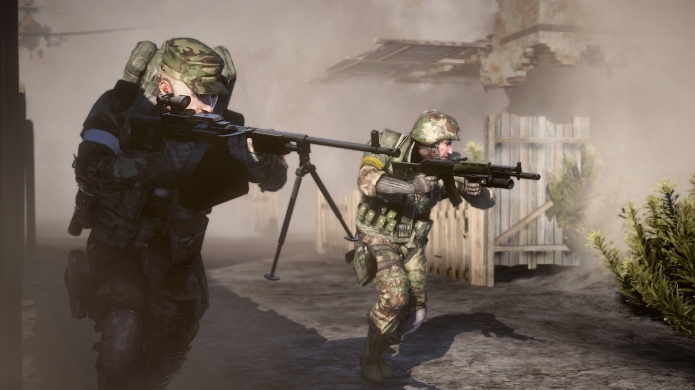 Kicking things off with a nice nod to their previous Battlefield entries, BFBC2 begins its tale in 1944 before jumping into the modern setting where Modern Warfare (1 and 2) is all but safe from cheesy stabs in the back. The characters throughout constantly drop digs at Infinity Ward's monster, and while some are funny, you can't help but feel a slight sense of jealousy written throughout - rather than just let your game do the talking for you, DICE are making a conscious effort to bully the Modern Warfare series, which in itself slightly lets down the otherwise stellar effort on offer here.

From 1944 the game takes players on a raucous adventure through snow, jungles, deserts and urban settings; each with a lush visual injection of "me too" at the competition, though touting their more superior destructability angle seems a more gracious option than snide remarks or visual flexes. It's in this chaos-inspired system BFBC2 really does shine, with a far more robust mechanic than what we saw in the first game; offering even more tactical option in the multiplayer department, and smile-inducing fun in the single. I'd argue there isn't quite enough offered in context for the system in the main campaign, and at times it does feel like this really only is a primer for the fights against real humans (in an online "virtual" sense), but what is available for play in the main campaign more than suffices.

Gameplay sees a mixed bag of scripted gunplay, vehicle mounting and even platforming. It's all given to you at a powerful and compelling pace with an overarching story well and truly worthy of your eight or so hours at its helm. The game's characters are scripted in throwback style, like some awesome 80s action movie starring the usual suspects like Bill Duke or Sonny Landham, BFBC 2 constantly feels like a Joel Silver production, and never fares poorly as a result. It's stunning to look at on PC, and even the Xbox 360 version holds its own. PS3 owners have been given the lesser version of the game due to a lack of anti-aliasing - it looks and plays like a port on Sony's machine, but a PC port, not 360, for those of you counting. 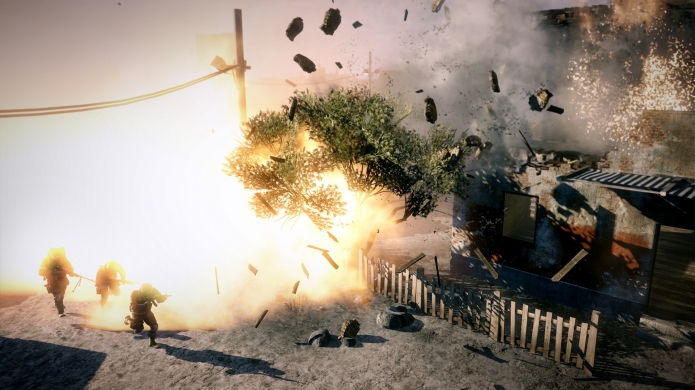 On my rig the game ran without a hitch (GeForce 8800 GTX, 2.4ghz Quad Core CPU), with pretty much all settings at maximum. There are a multitude of PC-specific options (check them out in this video), but being able to play with framerates and the like really creates a much more customisable experience than that found on console. It serves as a point of DICE's pedigree in this day and age of most games being built for console with PC seemingly an after thought, and equally offers added value to an already excellent product.

Of course, the single-player portion of any Battlefield title really is just a sidetrack to the main draw: Multiplayer. In this department Battlefield: Bad Company 2 delivers intensity in spades with excellent game modes, a solid destruction model, dedicated servers and a tight engine. The system in place is a synergenic one as balance here is key. Maps are designed to allow outside-the-box thinking with few choke-points or bottlenecks. Vantage points are made by the player, not the design, thanks to the destruction model, and each is large enough to tactfully engage the vehicular side of things. There are eight in total out of the box, or 10 if you scored yourself a VIP code (personally all these "pre-order advantage offers" are growing a little tiring), and these can be played in four different game modes - Conquest, Rush, Squad Deathmatch and Squad Rush.

While there are only a small number of modes, each offers a unique experience ranging from long-term, tactical engagement (such as Conquest), to bare-bones quickies (Squad Rush) and filler in between. And like so many Battlefield multiplayer options before it, each game offers a platform for war stories to be told later, as a single person can literally turn the tide of battle. In saying that, BFBC2 is a team effort, even the game's mild prod at deathmatch requires a side (four teams of four pitted against each other) - there's no open free-for-all here, and it works in the game's favour because of the overall tool-set. You gain XP for most usual things, such as objective completion (or attempt), kills, healing, fixing and more. XP then goes on to unlock more options for either your player, or the game as a whole - building on the strengths of balance and fair play. Incredible players aren't the be all of this multiplayer, because you're only as fast as the slowest person. In this regard, BFBC2 is not only a completely different beast to Modern Warfare's mostly solo multiplayer skew, but arguably more engaging - it's not about broken mechanics, hording or camping (as so many MW matches can be), but rather about being an important cog in a larger machine. 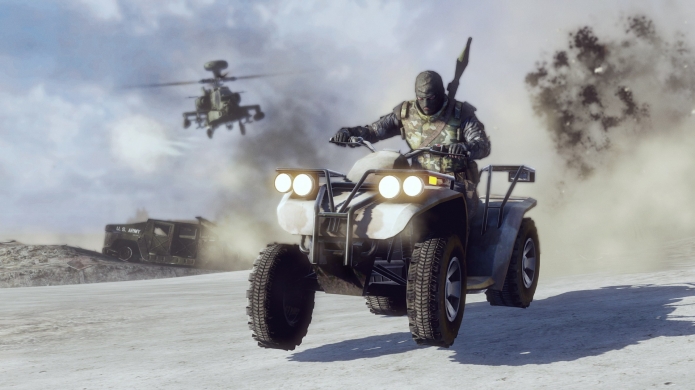 While the dedicated server point is definitely a strength, in Australia there simply aren't enough to go around (especially since we had to shut down a large percentage of them while EA implements better support), and it can take a while to get into one as a result. The server browser is also somewhat lacking, making it difficult to get into a good game (at least at this stage), though we're under the impression we'll not only get more (Internode have said they have a stack coming in, and BigPond are just awaiting approval from EA to roll out a lot more), but we've been assured that these gripes will be ultimately addressed (click here for more on the issue directly from DICE). It's the meat of DICE's support model - they feed off the community, and the more people get onto their forums and explain issues, the more likely it is they'll be broached.

In comparison to Infinity Ward's MW series, Battlefield: Bad Company 2 stacks up neatly. The two are different enough they can certainly co-exist, with one claiming strengths over the other in various departments. Multiplayer is a different sort of game with DICE's option, and will cater to a specific type of player. You're also always going to end up with a unique play experience in each of the modes on offer, which is another strength over Modern Warfare's more streamlined multiplayer. In the campaign end though, it's Infinity Ward's ability to craft eye-popping set-pieces that still outshines those found here, it doesn't help that BFBC2 recognises a need to compete; taking as many jabs in the dark as possible - in the end it kind of comes off as a bit desperate.

It's also important to know I scored it on gameplay merits because most of the major problems are in the throes of being fixed (server issues etc), so while I agree it's a shitty situation out of the box for a lot of dedicated people, the game itself is still excellent and deserving of a good score, just EA and DICE's initial support that's lacking in the initial stages. It should still be noted that if you are a hardcore multiplayer gamer, you might want to give the game a couple of weeks for things to stabilise.

Regardless, you're going to have fun with BFBC2 - the single-player is a much improved affair over that of the first game, and the multiplayer is like a fine wine (when it works); crafted from vintage cellars who've made it their business to perfect their art.
Latest Comments
Link