It’s safe to say that we’re living in a somewhat golden age of comic book adaptations. Where everything from movies to television series and yes, video games, are seeing more than their fair share of great stuff. Which means being, well, ‘good’ might just not be good enough. The first season of Telltale’s Batman series was highly anticipated by many people, but it was hard to shake the comparisons to Rocksteady’s Arkham trilogy. Not in terms of mechanics, because Telltale deal in a very specific kind of interactive story, but in the somewhat spotty presentation and narrative slumps that failed to reach the same cinematic heights of the Arkham trio.

Getting to the presentation side first, Season Two of Batman: A Telltale Series is a far more impressive effort than what we found throughout the first season. Virtually all the performance issues, stuttering on the console versions, and stilted animations, are gone. Leaving no distraction or excuse, other than to pay close attention to and get engrossed in the story. Picking things up from the aftermath of Season One, “Enigma” not only introduces a new singular villain whose appearance and demise all happens within a single episode, but it also successfully weaves in a number of Batman/Bruce Wayne’s relationships throughout its runtime. 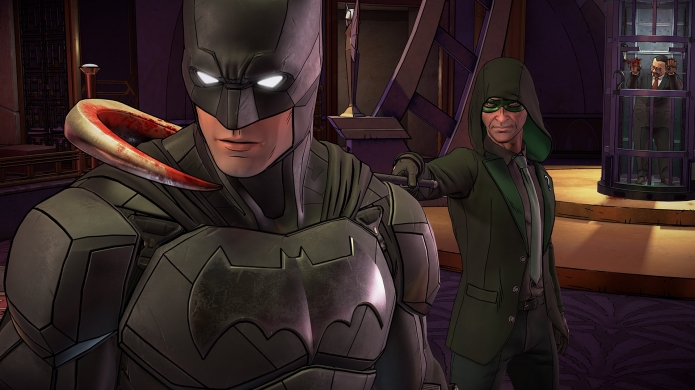 Masterfully so. There’s an air of confidence present in Enigma that was absent until the latter stages of Season One. It even manages to pack in multiple surprise twists and turns without feeling like obvious ways to ramp up the tension. Something that can be said about a few Telltale releases, where big second or third episode twists could be predicted in advance. Also, introducing the Riddler at this point in the story makes for both a classic Batman foil and a way for Telltale to re-instate its mark on the long-running and iconic character.

This is a version of Batman that might just be harder to pin down than most, with several key revelations made late in last year’s outing that present a very different version of the Dark Knight than we’ve grown accustomed to. With the biggest being, and this was revealed quite early on, that it was Bruce’s parents that ran the criminal underworld of Gotham. It’s a fascinating take that’s made even more interesting thanks to the narrative choices you get to make at regular intervals. It adds the right layer for those interested in taking part in a story featuring a more aggressive Batman.

Action is once again presented with quick-time events that trigger animated sequences of impressive comic-inspired action. But perhaps what’s most impressive about Enigma is how it tells an episodic story, that of a single case that needs to be solved. And throughout all the ups and downs that Batman/Bruce Wayne endures in tracking down the Riddler, his relationships evolve and develop in fascinating ways. A mysterious new Agency is introduced that puts Batman’s relationship to law enforcement to the test. And the mysterious John Doe all but makes his debut as The Joker. Hints are given about where the story might head, but mostly things are kept focused on the events that transpire here.

We’re excited to see where the story goes. And perhaps even more so, we’re excited to say that Season Two of Telltale’s Batman finally delivers a great take on the long-running and iconic character. In its very first episode.
Latest Comments
No comments currently exist. Be the first to comment!
Commenting has been locked for this item.
Follow Us
Latest Reviews
More...
News Feed
Advertisement
Latest Threads
Log In
Create Account | Lost your password?