If Batman: Arkham Asylum and its comrades reflect the modern interpretation of the Dark Knight - that is, brooding, shadowed and a little bit scary, Batman: The Brave and the Bold is a mirror held up to the character's 1960s cartoon adaptation. Based on the recent American series, we get a bright, colourful Caped Crusader, coupled with more comedic one-liners than you can poke a sidekick at.

The characters are hand-drawn, the backdrops are deliciously two-dimensional, and it feels like you’re playing a Saturday morning cartoon on your Wii. There are no whizz-bang 3D effects here, no rippling water, and definitely no realistic physics. This one is unashamedly a cartoon, and embraces everything that comes along with that, including using voice talent from The Brave and the Bold television series for every single line of dialogue. Mmm, authenticity.

This simple artwork is paired with a pretty straightforward brawler gameplay mechanic. Your task is to move from left to right and beat up everything in your path. Sometimes there’s a few platforming bits and pieces thrown in to add interest, a couple of jumps, the odd grappling-hook-required manoeuvre and a few more complex boss battles, but it’s not what you’d call “challenging”. 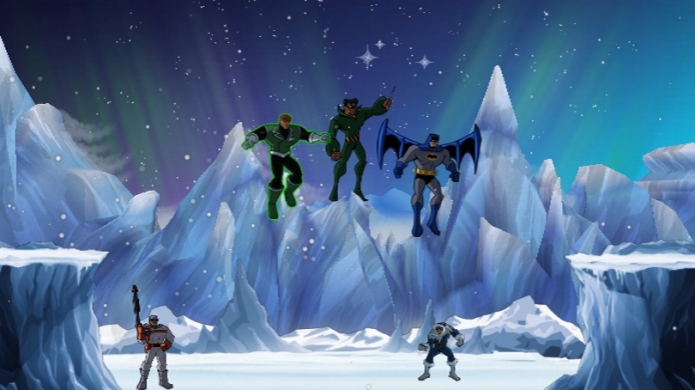 (It’s worth noting that the introductory in-game training session is more complicated than it needs to be – and more repetitive. All of the moves are explained again as they come up in each level, and you can fluke your way through the game by merrily mashing the attack button on the Wiimote at any opportunity. (Ask me how I know.))

Co-op is beautifully implemented (even if it’s not online), with the AI stepping in ably when you don’t have a friend handy – I found myself getting quite competitive against “the computer”, trash-talking the screen when I managed to score more coins than it did, and cursing my companion’s lack of resurrections. Not my fault I died so frequently – those floating platforms were hard! (By the way, ridicule is about the worst you’ll suffer for dying in the middle of battle: you’ll be resurrected immediately for a cost of 100 coins, which are easily recouped by killing the next bad guy.)

The game itself is an enjoyable little indulgence, but it’s not just another cookie-cutter superhero game. To start off with, you probably won’t know everybody involved. While Batman is initially teamed with Robin, later levels see him partnered with Hawkman, Blue Beetle and even Guy Gardner, one of the Green Lanterns. These pairings do battle with slightly more obscure villains too - Catwoman makes an appearance, but she shares the limelight with Cat Man, Copperhead, Astaroth and Gentleman Ghost. 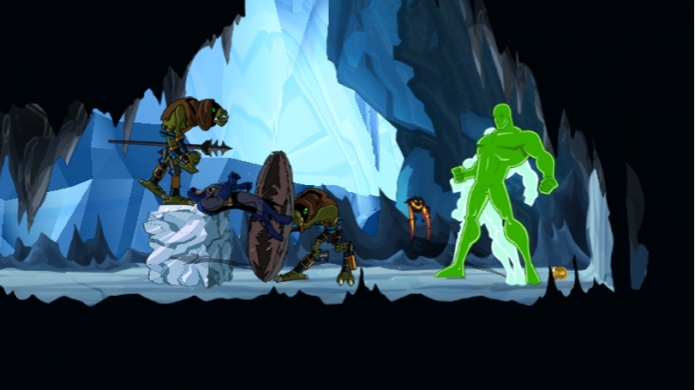 This does make a refreshing change from simply watching the same old goodies fighting the same old baddies, but it also takes away some of the instantly-recognisable familiarity from the franchise. The Australian PG rating reinforces the kid-friendly nature of the game, but unless these are children with an encyclopaedic knowledge of video games, the lesser-known character references will most likely be lost on them.

Perhaps that’s the intention! Perhaps Batman: The Brave and the Bold has been designed as a way of introducing these classic, often-overlooked characters to an all-new audience, and we’ll see a new generation of kids who believe that Black Canary is the best thing ever, recognize Jay Garrick as the Fastest Man Alive and who truly appreciate that Aquaman really is a laughing stock.
Latest Comments
No comments currently exist. Be the first to comment!
Commenting has been locked for this item.
Follow Us
Latest Reviews
More...
News Feed
Advertisement
Latest Threads
Log In
Create Account | Lost your password?