I’m Batman. That’s the sentiment you’ll walk away with after just minutes with Batman: Arkham City where, despite starting out as billionaire playboy Bruce Wayne; apprehended and processed as a “political prisoner” in the crime-riddled sandbox that is Arkham City, you’re left, literally, out in the cold with an entire city to traverse; criminals left and right of you, and with no real sense of what to do. That is until Wayne contacts his trusty life-partner, Alfred, and the Batwing flies by with an item drop no respectable Gotham-based crime-fighter should do without - a Bat suit. You’ll then suit up, unlock an Achievement reminding you you’re Batman and start gadgetising your way to whatever it is that’s brought Batman here in the first place.

And so after playing with the ball of string that is Selina Kyle, aka Catwoman, and deliberately being incarcerated as Bruce Wayne, the fruits of Batman’s plan come to a head: You’ve deliberately infiltrated Arkham City, a prison built within the slummiest areas of Gotham, by one Quincy Sharp - the former warden of Arkham Asylum who has, since that first incident, somehow become mayor of Gotham. But why? 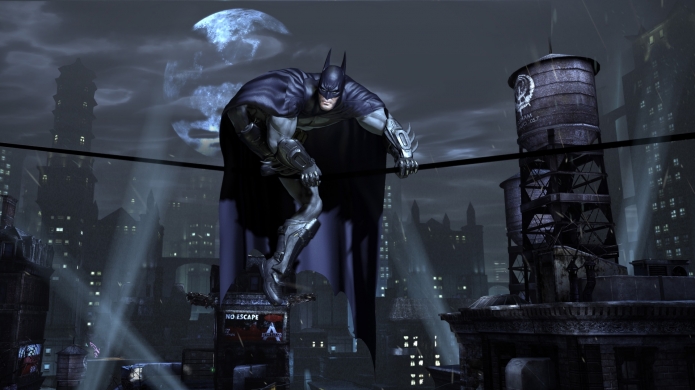 Specifically, he has no idea what’s going on, but alarm bells started ringing when it was announced Hugo Strange was appointed warden of Arkham City; Strange being one of only a handful of people who know Bruce Wayne’s true identity is Batman (see what I did there). Thus the World’s Greatest Detective needs to do just that - detect. He needs to learn just why this monstrous place has been built, how the individual powers that be within it correlate, and just what all of this means for Gotham on the whole.

Arkham City is a sequel in its truest sense. Not because the game follows the same formula as the original with an updated story, but because Rocksteady understand that what they created with Arkham Asylum was a playground for people to exploit a series of systems, systems that turned you into Batman. And so Arkham City also does this; serving up a heady feast of gameplay ideas you can use from the outset and also accrue along the way. It shows there’s a progressive sense of design on the developer’s part when, instead of setting up a contextual stripping of your power, they’ve tapped into what, and who, Batman actually is.

Rather than having you chase the same upgrades again, the game gives them to you as soon as you have your suit. There’s also no mention, from a HUD sense, that you have these until you’re first on the trail of the Joker (pretty early on in the piece), but it means savvy players can start zipping their way around Arkham City like a pro. You’ll have Batarangs, Explosive Gel, your Grappling Hook, a remote-control Batarang and your Cryptographic Sequencer out of the box, and this alone shows just how much regard Rocksteady have for the idea of player-choice and ultimate freedom.

Of course the team would be remiss to avoid the concept of upgrades entirely, and as situations call for it, in a contextual story sense, Batman will earn more gadgets while a very light RPG system sees you collecting XP to gain access to new, unlockable Combat moves, armour upgrades and so on. 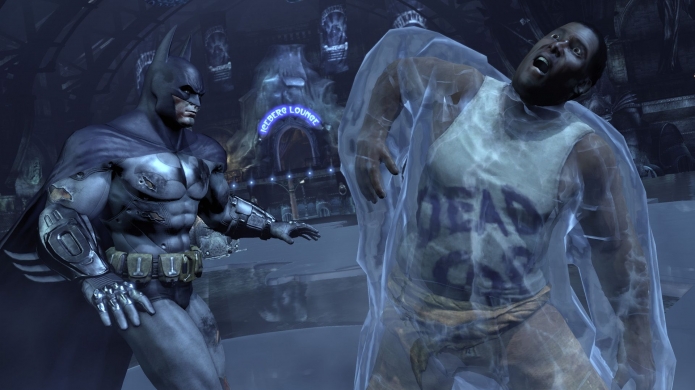 This system transfers to Catwoman as well, and even though you spend only around 10-percent of the game as her, you can still apply all XP accrued through her, to Batman, and vice-versa. The whole system is hardly a dent in your day, and is fairly automated barring your choice when it comes to what to upgrade, or how you’ll earn XP in the first place. For the most part, being a successful Batman or Catwoman is really all that’s needed - take out collections of baddies; clear stealth arenas or solve Riddler puzzles for a consistent stream of XP, but you’ll also, obviously, earn larger chunks for completing major story objectives or side missions, alongside earning any of the aforementioned new item upgrades.

As structured as all of the above sounds, it’s not. Even the predator maps and combat challenges are more varied and diverse this time around, with some of the best AI in the business. But you’re also eventually equipped with even more to mess with them, such as an Electrically-charged projectile you can use to shoot generators and activate a positive or negative magnetic charge. So, waiting in the shadows for an unsuspecting goon to patrol near one, and shoot it so it magnetises his weapon and knocks him off his feet, never gets old. However, as mentioned before, these guys are smart, and will quickly shoot said generators to take away your fun and help themselves from looking quite the fool at the hands of The Bat.

They’ll also now shoot out your precious gargoyles, or be more thorough when trying to locate you after you take one of them down. Their responses to what’s going on are far more dynamic too, which is no mean feat considering how good they were in Arkham Asylum. There’s also a persistent sense of progression riddled throughout the game-world. You’ll overhear many conversations in your Arkham City travels thanks to Batman’s eves-dropping prowess (which should be used to help you discover the game’s myriad secrets and goodies), but aside from being clued into the workings of the game’s underworld or its aforementioned treasures, you’ll constantly be reminded of how well you’re doing, and just how much you’re striking fear into the hearts of evildoers. It’s quite empowering. 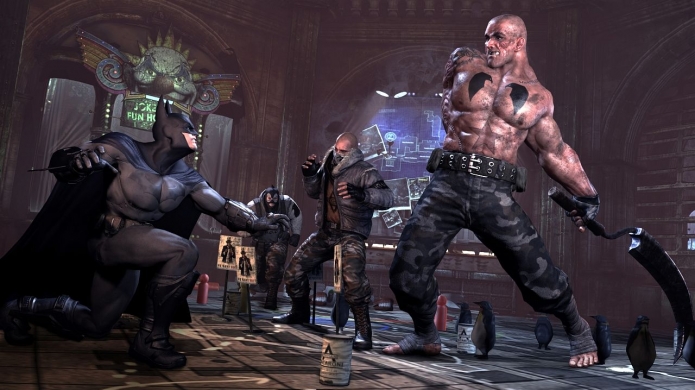 Beyond being there to practice your combat on, or take out stealthily, the enemy is also the life of the world. Their conversations, as mentioned before, bring Arkham City to life and give you different flavours of the city based on where you are. Watching them idly is also an excellent way to not only see the character Rocksteady injected into the game, but to also have a laugh. One instance saw me investigating a murder from a sniper - pretty serious business. In the background, however, two inmates were swinging their weapon -- a leadpipe -- at rocks on the ground as if they were playing golf, replete with one guy setting up the rocks for the other guy to swing at.

Having such unpredictable AI, and the various gameplay and treasure systems in place, also means Arkham City is rife with emergent gameplay. Rocksteady’s strength here lies in a few factors, but it’s most notably the size of the game-world and its multiple tiers of play. Having such a vertical world has allowed the developer to exploit what being Batman is about - perched high above the turmoil, it’s easy for the Dark Knight to pick his spots and tactically approach everything, but part of being Batman is being prepared, and alongside his superior fighting skills are his traversal abilities, the kind that put Ezio and Altair to shame.

In fact, it’s once you learn to use his Grapnel and gliding combination, the game-world design begins to truly shine, which sits snuggly alongside the emergent gameplay I just mentioned. You can stalk the streets, stoic and peremptory to inmates; taking them on at every turn, rescuing oppressed political prisoners or just leaving a message for all the other thugs of Arkham City, or you can take to the skies, like some ever-watching bird of prey, and move from point to point unhindered - as free as you like. Or you can combine the two, and decide mid flight you don’t like the sound of someone’s snarky anti-Batman remark, or hear the desperate cries of some victim you need to save, and thusly dive-bomb your way to them creating an impact zone and making an entrance like a boss. Boss Batman, as it were. 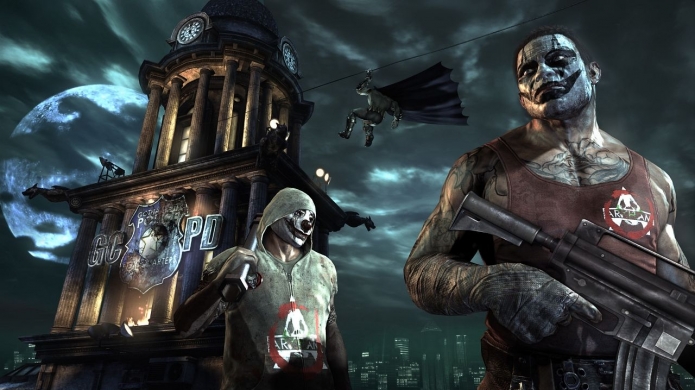 And that becomes the driving point of the game. Being Batman. There hasn’t been a superhero game, ever, to create such a feeling of ability and recourse; of strength and justice, with so much left up to the player to choose just how they’ll use all of this. Screw “with great power comes great responsibility”, how about “with Batman comes awesomeness, and then some”.

Batman: Arkham City is a perfect sequel, and a near-perfect action game. It’s stunning to look at (seriously, just watch the snow flakes hit his suit for a minute), plays as smooth as they come, offers an unprecedented sense of player-choice in an open-world, despite being caged in a makeshift prison, and harbors among the best voice-acting and scripting the Batman universe, and games, have ever seen. It’s dark, brooding and relentless in adult themes, yet requires no gore to relay any of this. And it just doesn’t stop. Once you’ve completed the game, Arkham City remains open to you and your gameplay devices to uncover all of its secrets (I can’t wait to visit Calendar Man on Halloween).

And then once you’ve had enough of all that, there are Challenge maps for combat and predator modes, Campaign Chapters for DLC characters, Concept Art, Character Trophies, Story Synopsis, Arkham City Stories, Profiles and oh-so-much more. I just hope there’s more coming in the way of campaign-specific DLC, because there’s still so much more Arkham City has to offer, even with all of the above, which should tell you why it’s an absolute no-brainer of a purchase and one of the best games of the year. Brilliant.
Latest Comments
Link