Getting a moment to catch your breath, to take stock of your surroundings, to explore whilst expecting something might happen. These are all variations of the same thing. The act of building up tension... and then letting it subside. The quiet before the storm. There's an art to it, a style; the panic, the dramatic tweaking of the player's nerves and expectations. The surprise.

Back 4 Blood doesn’t have any of these qualities, at least not in a way that makes the action feel like anything more than the same thing over and over and over. A title with roots in the horror genre should be aware of pacing.

Shooting the undead (or ‘Ridden’ in the case of Turtle Rock’s Back 4 Blood) is an exercise in repetition, that much has always been true. The “over and over and over” here is in reference to the action lacking meaningful variation. Even when Corruption Cards and the so-called Game Director spice things up in ways the original Left 4 Dead didn’t advertise -- you’ll barely notice any difference outside of maybe some (admittedly good looking) fog or that the regular zombies look like they’re wearing glow-in-the-dark Stackhats. 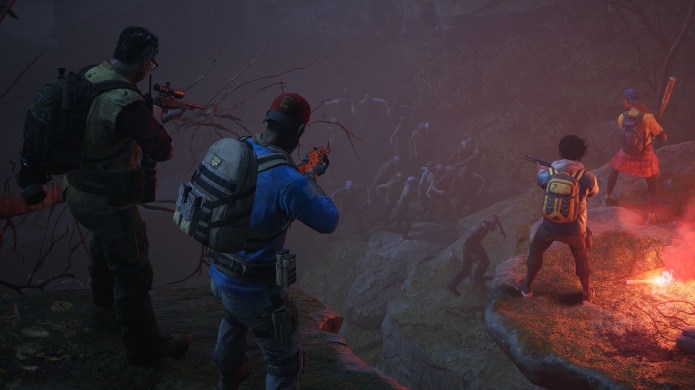 The act of building up tension... and then letting it subside. The quiet before the storm. There's an art to it, a style; the panic, the dramatic tweaking of the player's nerves and expectations. The surprise. Back 4 Blood doesn’t have any of these qualities, at least not in a way that makes the action feel like anything more than the same thing over and over and over.


Getting a random card that says something like ‘this time, this type of zombie will be wearing a helmet’ is putting a label on a wooden frame with a handle that says ‘door’. It’s better left unsaid and something you’d expect to find as you get deeper into a mission. Same goes for the NPCs screaming "Shoot it in the head!" every single time you point your weapon at said zombie, err, Ridden.

As a new co-op “not-zombie” shooter from the studio that developed the original genre-defining classic for Valve -- there’s a sense, implied by the naming, that what you’re getting here is a spiritual successor to 2008’s seminal Left 4 Dead. The best way to describe the action is to say that instead of being overwhelmed or overrun by the horde or being surprised by a special zombie, the challenge mostly comes from facing off against waves of specials. 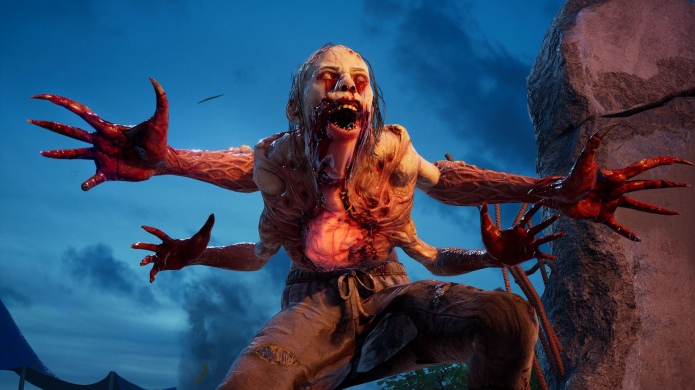 These are bulky monsters, ones that can grab you, spit on you, and so forth. In Back 4 Blood if there’s one large explodey-zombie there’s at least two or three or four in quick succession. Without fail. In fact, outside of the occasional on-screen prompt, horde sizes are such that you wouldn’t really call them a ‘horde’.

For a game purported to be all about variation, Back 4 Blood is surprisingly predictable. And being predictable saps the fun, incentive, and reason to replay levels at higher difficulties. The uninspired, linear map design lends to the predictability. The outdoor maps are especially guilty of this; vast, open vistas with a well disguised but narrow path with no room for deviation. Even the close-set and what should be tense escape through the sewers map is diminished by a notable lack of dead-ends or cul-de-sacs.

In place of actual scares you’ve got an almost cartoon-like presentation in Back 4 Blood, the lighting is mostly flat and the colours are vibrant and inviting. This applies to the cast, and the story which follows their exploits to go out and find resources and, err, other stuff before taking on a screen-filling subterranean videogame boss as part of the finale. Getting to see the cast covered in red after a single close quarters encounter is amusing, but not being afraid or taken aback by the creatures and special zombie designs feels like a step back. 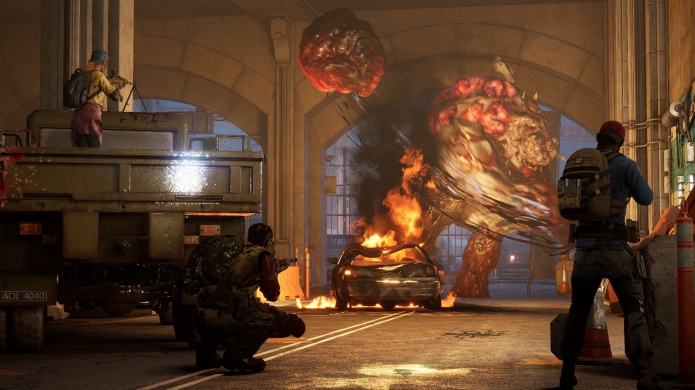 Replace cartoon-like with ‘Nintendo’ or ‘classic ‘90s videogame' and the addition of giant bosses with glowing weak-points starts to make sense. It’s jarring, but very game-y. These bosses sit on top of the environment in a way that makes them feel superimposed. They make no mark or even leave a trace. They feature names like ‘Ogre’, and attack in easily recognisable patterns. Paired with the relentless pace of the action, in that you’re always under attack with special zombies spawning every few seconds, there’s an identity crisis at the heart of Back 4 Blood.

For a game purported to be all about variation, Back 4 Blood is surprisingly predictable. And being predictable saps the fun, incentive, and reason to replay levels at higher difficulties.


It’s paced like an arcade game, with very little room for strategy.

At times Back 4 Blood feels more like a spiritual successor to House of the Dead than a continuation of the Left 4 Dead formula; where there’s non-stop action and the only break you get is in between levels. It also helps contextualise some of the silliness, like having the exactly-the-same-size group of evil crows copy-pasted throughout a level acting as that thing you can’t disturb. Or having to find copper to spend on a magic box that sells you items and weapons in exchange for said copper. These are all fine mechanics, they simply feel like game elements as opposed to being a part of a dynamic environment.

One sequence in the latter half of the lengthy campaign sees you take a river boat or platform thing across waist-high water. The Ridden follow the sound of the motor, yet their physical movement remains unaffected by the swamp. Each linear level is this, a different backdrop… but the same thing. Swap water, a hedge maze, nothing can stop or even slow-down the Ridden. Their relentless attacks will always be there, common sense or logic be damned. In one unintentionally memorable instance, they simply fell from the sky in an endless stream.

One sequence in the latter half of the lengthy campaign sees you take a river boat or platform thing across waist-high water. The Ridden follow the sound of the motor, yet their physical movement remains unaffected by the swamp. Each linear level is this, a different backdrop… but the same thing.


Okay so that’s the fourth time ‘relentless’ has appeared in this review, and in a lot of ways that sort of pacing is serviceable for a zombie shooter. Especially when played in co-op, where things like teamwork come into play, and trying to stay alive creates a sense of shared tension. There are a few scenarios in Back 4 Blood that are both challenging and rewarding. There’s one involving a last-stand at a bar with music playing on a jukebox, and another where you need to clear the surroundings of a church and graveyard before you’re granted entry. 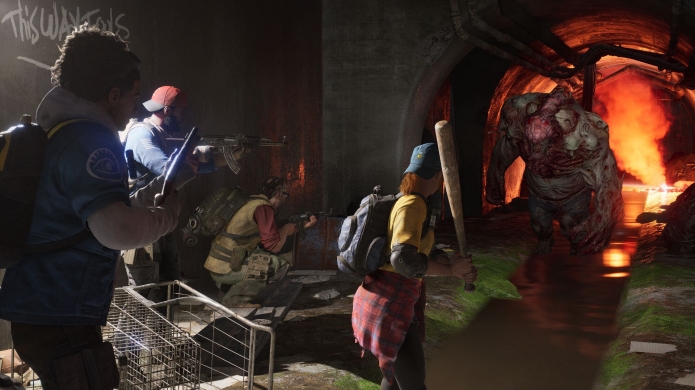 Back 4 Blood isn’t merely a simple riff on Left 4 Dead, nor is it a game where it needs to recreate past glories to succeed, but these two sequences in particular feel -- at least in spirit -- like that magical time back in ‘08. Back 4 Blood definitely feels like a game from now; the visuals are solid, performance is great across all platforms, and it supports cross-play right out of the gate.

Unfortunately the same cannot be said for the AI bots that will populate your team when you have less than four players. Left 4 Dead’s bots would helpfully point out hazards and the appearance of special zombies, heal you when necessary, and could be relied upon to have your back against a zombie sneaking up from behind. The AI in Back 4 Blood is woefully inadequate, and often detrimental to your own survival. They all too often become stuck on the terrain, spinning uselessly in place, preventing the game from moving forward.

The AI prefers to stand over or nearby your pinned or incapacitated body rather than effect a rescue. And, if the end game stats are to be believed, are incapable of killing a single zombie. The post-game stat screen in general needs actual stats.

The upside is that within Back 4 Blood’s core there is good to be found. Mechanics-wise, using points to unlock cards and then build your own deck to form a build is great. Here you get bonuses and passive abilities that can reinforce or even define a style of play. Focus on a particular weapon or squad-role like ‘tank’ or ‘healer’. More powerful cards unlock the more you play, alongside cosmetic rewards, and there’s a lot of the four-sided cardboard stuff to be found. It’s a solid foundation and one you’ll lean into thanks to the increased challenge that comes from moving through the different Acts.

The upside is that within Back 4 Blood’s core there is good to be found. Mechanics-wise, using points to unlock cards and then build your own deck to form a build is great.


And the core, the shooting, is responsive and feels good. Taking out zombies packs a punch even if the explosions are more than a little underwhelming. The pipe bomb to lure zombies and then explode? That classic Left 4 Dead throwable. It’s basically a dud here. A lot of the weapons are what you’d expect to find, albeit in weird coloured-RPG form meaning the exact same axe but Purple does more damage than the white-coloured version. Having higher tier weapons can make sense in a randomised loot sort of way, but having them only appear in the latter stages of an Act weirdly adds to the game’s predictability. And in that sense is a detriment to the dynamic card system.

With Back 4 Blood available on Xbox Game Pass on PC and Console there’s reason to jump in if you’re looking for something new to play with friends. The look and feel is familiar and the action is engaging and chaotic when played with a group. For a while that is. Thanks to the sameness that permeates across most levels and backdrops and the predictability of the pace, it doesn’t take long for this Left 4 Dead spiritual successor to wear a little thin.
Latest Comments
No comments currently exist. Be the first to comment!
You must be logged in to post a comment. Log in now!
Follow Us
Latest Reviews
More...
News Feed
Advertisement
Latest Threads
Log In
Create Account | Lost your password?