Being angry all the time is what defines Asura as a character, and being a demigod ensures that the expression of his anger always results in something incredulous happening on-screen. Whether it’s punching giant orbiting purple creatures into pieces (that also happen to be as large as our moon), or growing extra arms to punch a gigantic purple elephant into non-existence, Asura lets his fists do the talking. That is, of course, when he isn’t yelling, grunting, screaming, or making noises that are a combination of all of the above. Any good story, or game for that matter, requires their protagonist to overcome obstacles, and in the case of Asura’s Wrath, this is exceptionally true, to the degree of which the only more apt title for the game would be “Asura’s Angry Flame Fists vs. All the Gods and Demons You Can Muster.”

Presented as an interactive episodic anime series, which would be a fair but understated way to describe the overall game, early moments of Asura’s Wrath raise an important question: “is this even a game?” 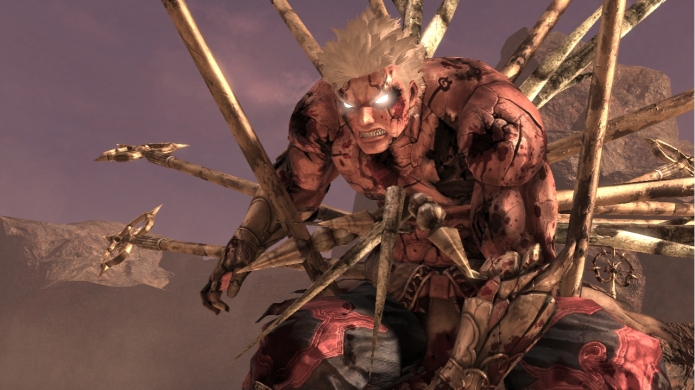 Because apart from a few quick-time events and taking part in a shooting section that plays a little bit like Rez meets Space Harrier, the majority of your time with the game will be watching the impressively detailed and directed story sequences. Now, interactive movies masquerading as games have been around for a quite a while, culminating with the rise of the CD-ROM era, and fading shortly thereafter. Quick-time events are no stranger to the modern gaming world either (and in the process becoming an annoyance), seeing a resurgence of late thanks in part to the real-time nature of most cinematic sequences deployed today. So even though passing off Asura’s Wrath as a heightened modern day anime or altogether kind of crazy version of Dragon’s Lair, is a justifiable reaction, the end result still feels remarkably fresh.

The majority of the game is essentially story, and as mentioned is broken up into episodic chunks (18 in total) that play out like a season-long narrative of a TV show, with introductory credits, mid-way point commercial break bumper style logos, and previews of what’s in-store in a “next time on…” fashion at the end of each episode. Although presented in this well-recognised style may seem like Asura’s Wrath could very well appeal to a much broader audience, or at the very least anime fans, the opposite is true. The story presented in Asura’s Wrath is very specific in its aim to provide a ludicrously over-the-top Eastern religion and myth-based story with sci-fi and Western elements thrown in, centering on very basic thematic principles covering fate, vengeance and misplaced anger. To be fair, the game’s story features a lot of anger, so much so that it not only is Asura’s defining characteristic but the games’ as well. 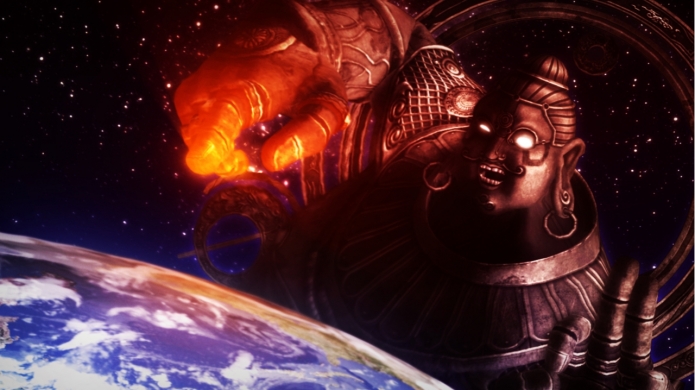 Early on in the second episode, after surviving a perplexing but wonderfully intense and epic space battle against an army of demon like creatures (dubbed Gohma) Asura, who just happens to be a demigod, husband to a pretty housewife and father to a priestess with an uncanny ability to channel the powers of good into a space station-sized neon lit Buddha statue/Death Star super weapon, is framed for murdering the Emperor – yep, that old narrative chestnut. Setting aside the irony of a religious icon masquerading as a planetary sized super weapon, the core narrative although quite simple in its presentation of Asura’s vengeance against the deities that framed him (and murdered his wife to boot), slowly morphs into a fight to save the planet and inhabitants, and throughout all of its twists and turns is excessive and grandiose to a fault. Simple things like being banished means that the story will span thousands of years, and fighting deities means that Asura will have to punch his way through planets and spaceship sized foes on a regular basis.

Apart from the quick-time events and the shooting sequences (being a demigod means Asura can of course shoot fireballs from his mechanical arms) the core combat in Asura’s Wrath is kept quite simple. Featuring two distinct attacks, combat is presented in a fast and frenetic style that leaves little room for depth. The aim of each battle is essentially to increase Asura’s rage to boiling point as quick as possible which then triggers a finishing move that usually leads into the next extended story sequence. This means most battles play out very similarly by having the player take on the role of Asura to happily punch away at enemies with some basic dodging and jumping around to avoid certain attack patterns. Battles themselves also rely heavily on quick-time events and button triggers to execute power moves, which make them merely serviceable to the story. 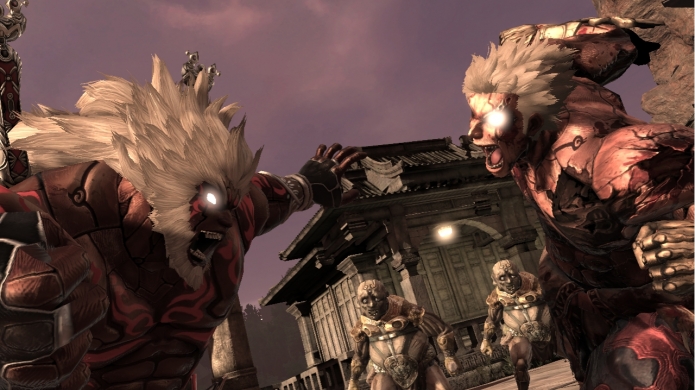 The game switches between these play styles quite regularly to keep players engaged and somewhat superficially connected to the character of Asura, and the story is rarely interrupted. Failing a quick-time event means that your rank at the end of each episode is affected, and the unusual occurrence of falling in a battle (which unlocks an Achievement) simply means your actual gameplay time increases as you retry that particular section, again only affecting your overall episode rank. Although detrimental in its description, by placing the execution of the story itself above timed button presses and quick-time events allows the game to continue even with failure on the player’s behalf, which works wonders for the overall pacing. Further proof that the game is essentially a real-time story comes in the post-episode ranking where after 20 minutes or so of sitting through a particular chapter can result in as little as three minutes of actual gameplay time, rewarded with an ‘S’ rank.

Underpinning all the visual craziness of what players both watch and actually engage in is an impressive story, with a clear scope and narrative structure, and something that takes precedence over all the half-baked gameplay elements. In most cases, gameplay that feels as limited as what’s presented in Asura’s Wrath would be a huge detriment to the overall experience, but its focus on being simple and not overly complicated or even skill-based works in the game’s favour. It allows the story to keep moving, it helps keep the pace of each episode both frenetic and somber, much in the same way simply watching a movie or TV series allows the creators to be in direct control of the pacing of each action beat and dramatic moment. 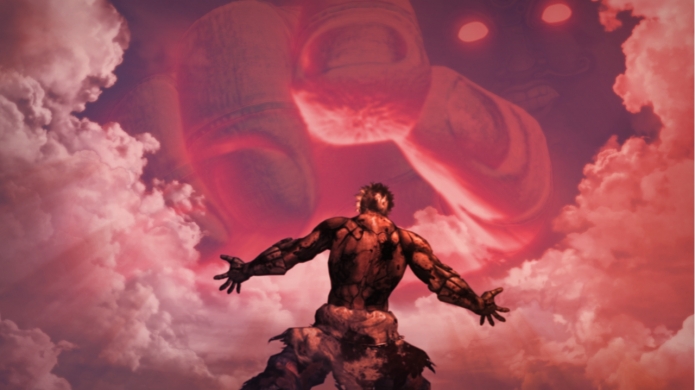 And this is both Asura’s Wrath’s greatest strength and weakness, as an example of a semi-interactive anime-inspired TV show, featuring pretty impressive art-direction, animation, and direction, there’s a lot to be impressed with. On the other hand as a game Asura’s Wrath would probably not appeal to action game fans that would normally be enamoured with another quirky Japanese-developed title along the lines of Bayonetta or even Devil May Cry.

There’s definitely an audience for a game like this, a story-driven interactive experience that opts for bombastic action and spectacle as opposed to taking place in the real-world as a police or crime procedural, and for that reason, and that particular audience, Asura’s Wrath comes highly recommended.