There’s something inherently cool about a city builder set in the future. One where you take on the role of a corporation, which in this case is KostaCorp – A Division of Andreadis Industries. Or, whatever you decide to call it. In this future, a world where climate change has led to the comfortable temperate regions on the planet and land as a whole disappearing under volumes of water, it’s up to the various mega corporations to build, mine, and expand into arctic territories. And even, colonise the moon. Yep, that circle thing you see from time to time when you look up. And all for profit of course. Otherwise they just wouldn’t be corporations.

Now, this may sound like a scenario ripe for social commentary, but Anno 2205 plays it entirely straight. Almost too straight, with slick visuals and a sheen so pristine it often seems like you’re taking part in an interactive training video for how corporations see themselves. Albeit a visually impressive one. Anno 2205 is definitely a pretty game. For a strategy game though, being apolitical is just about par for the course. Instead, the focus is usually on city planning, trade routes, resource management, and making sure roads and buildings line up just so. Anno 2205 is no different, but it offers a distinct and enticing approach to the genre. The future. 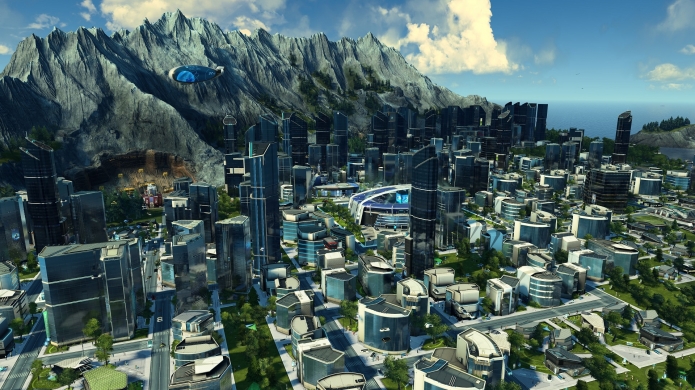 When you begin construction in the temperate zones all you really need to produce to keep your workers happy is rice and water. And give them access to a “community centre”, a building that kind of looks like it’s more of a propaganda dispensary. Strangely, workers will always be content with these three things and nothing more. Now that may sound simple enough but you can upgrade any group of workers to become operators, who can then produce robotic materials and other neat future things. But then you’ll need to start producing fruit and vitamins and other more exotic stuff to keep the operators in check. And working efficiently on behalf of KostaCorp.

It’s a delicate balance, one that in-game tool-tips and a clean presentation helps keep relatively simple. And completely engrossing. The type of experience where you could easily lose an entire day. Another aspect of strategy games, the good ones, that is par for the course with Anno 2205. But the main draw here is the futuristic setting, and through an objective-based campaign it won’t take long before you expand your corporate empire and need to manage colonies both in the arctic and on the lunar surface. With the ability to simply zoom out to a global view and change regions on the fly (with minimal loading) it’s all very cool. The global view also doubles as the trading hub, and one that never feels cluttered. Which when you consider the number of moving parts, and dozens of good you can produce, is commendable. 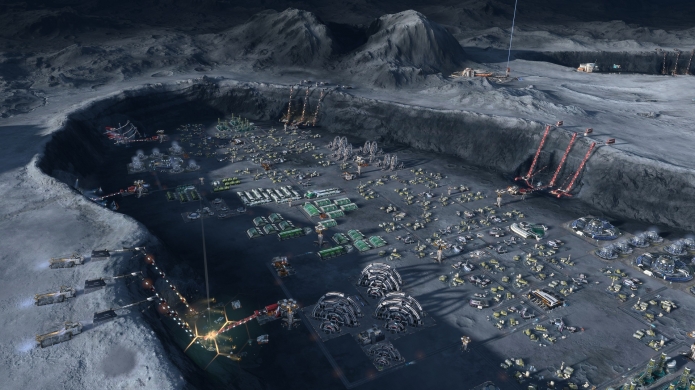 Also each region has its own distinct set of resources to gather, and obstacles to tackle. In the arctic regions you’ll need to ensure your populace are kept warm, which limits expansion. On the moon the situation is similar except that you’ll need power intensive shields to ensure that the valued employees of KostaCorp remain not-flat. So the feeling that you can stop what you’re doing at any point, and switch up the scenery and challenge, adds a definite sense of variety.

The setting of a future where corporations vying for money and resources may sound a little dull for some, but in Anno 2205 a villain is introduced pretty early on. A moon-based group of separatists intent on disrupting corporate interference, going so far as to attack installations and structures on the earth’s surface. But don’t worry they won’t harm your colonies because the game features separate RTS-style missions set on specific maps for these encounters. With direct control over a fleet of ships, that can be upgraded over time, these missions pop up frequently and serve as a great way to kill time whilst you accumulate more credits and collect bonus materials. Well, until they start to feel a little too samey. For the most part they’re entirely optional, but the rewards are there for those looking for a bit of futuristic combat. Where the ships are strangely of the water and not space variety. 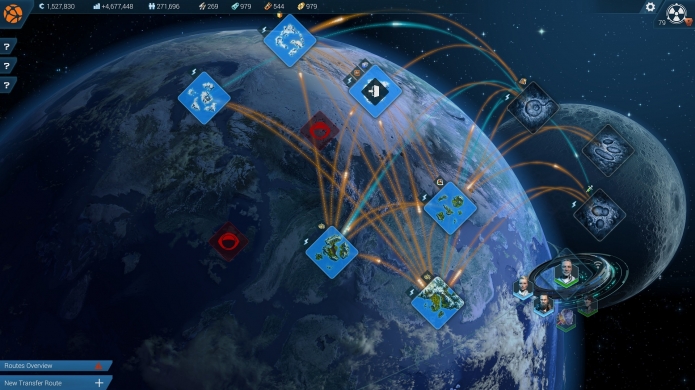 The only real problem with the way Anno 2205’s narrative is structured is that outside of some early promise, there aren’t any real threats to your corporate empire. The other corporations are friendly, they’ll give you missions to complete, and the villainous moon-separatists are never fleshed out or provide any real thematic weight to the story. Instead Anno 2205 shines in the city planning and micromanagement, and how the fact that colonising the moon can become supremely costly, with energy, people, and goods being a lot harder to manage than in your temperate zones on the earth’s surface. This creates an overall balance that once it grabs you, it probably won’t let go.

Even if some of it feels a little extraneous, like trying to keep investors and executives happy with god knows how many future toys and bits of entertainment, Anno 2205 is still absorbing. Plus it looks fantastic to boot, with animation and visuals that are some of the best ever seen in this type of game.