We've taken Kratos and Atreus on an almighty journey in sequel territory. Is it as good as the OG?
Realms Apart | Our In-Depth God of War Ragnarök Review
Celebrating 25 Years of Age of Empires: A Roundtable Interview
Post by KostaAndreadis @ 06:03pm 02/11/22 | Comments
Age of Empires turns 25, and we sat down with World’s Edge and Relic Entertainment to chat about the popularity of the series, the importance of community, and striking the right balance between historical accuracy and fun.

Developed by the now defunct Ensemble Studios and published by Microsoft, the first game in the Age of Empires series launched on PC in 1997. For those that weren’t connected to a rectangle beige box pointing and clicking at the time, it just about instantly made a mark in the popular RTS genre. An easy-to-pick-up and-play title that took history and presented it in a timeless isometric format, a very cool alternative to Warcraft and StarCraft. Advancing through different Ages would unlock new historical buildings and units, with combat that was both intense and memorable.

Related: Age of Empires on Xbox - Our Big Interview


But, it was with Age of Empires II that the series became a worldwide smash, an iconic release that found its way into classrooms, cereal boxes, and just about every desktop computer you could find circa 1999 and the year 2000. With another sequel and several expansions, Age of Empires II: Definitive Edition arrived on the scene in 2019. The long-awaited Age of Empires IV followed in 2021, a modern take on the classic Age 2 gameplay that still felt like a game that could have been released back in the day. Age 4 was developed by RTS veterans Relic, with support from Xbox Game Studios’ World’s Edge - who act as stewards and producers of all things Age of Empires. The fact that Age II is still getting regular drops of new content even now, alongside new players, is a testament to the game’s longevity - and the franchise’s iconic blend of history and fun RTS mechanics. With Age of Empires celebrating its 25th anniversary, the series isn’t going anywhere anytime soon either - with Age of Empires II: Definitive Edition getting the Return of Rome DLC and even the classic Age offshoot, Age of Mythology, is getting the Definitive Edition treatment and a sequel.

With Age of Empires celebrating its 25th anniversary, we sat down with World’s Edge and Relic Entertainment to chat about the continued popularity of the series, the importance of community and striking the right balance between historical accuracy and fun. We spoke to Adam Isgreen, Creative Director at World's Edge, Emma Bridle, Director of Customer Voice at World's Edge, and David Phan, Executive Producer at Relic Entertainment.

Is it surprising that Age of Empires II still resonates with players today, not just those that played it back in the day?


Adam Isgreen: No? Yes? At this level and point in its lifetime, it’s fantastic to see new players discovering the games and longtime players still loving their content, but Age is a timeless franchise and no one else ever stepped in to provide the gameplay and approach to history and RTS that Age focused on. I think it’s a testament to the quality of the original experiences and the appeal of Age’s unique approach.

"We see new players every week and work hard to ensure that they feel welcomed in, through in-game features designed to help them learn to play, and into our global community."


Emma Bridle: No! I think the combination of historical storytelling, strategy, and the fact that every game is different is sort of timeless. With us working on the Definitive Editions and Age of Empires IV, there’s been great fresh entry points for people who didn’t play the original titles back in the 90s and 00s. The original games were of such high quality, that they’re desirable titles years later and we’ve been able to expand and improve them with the Definitive Edition treatment. We see new players every week and work hard to ensure that they feel welcomed in, through in-game features designed to help them learn to play, and into our global community.

The AoE community is passionate and thriving, how does this shape development in terms of new features and modes? When it comes to supporting an older title like Age 2 versus Age 4, is there any difference in engagement and tracking feedback?


Adam Isgreen: Our community and customer voice team work hand-in-hand with the communities for each title, and each title has its own communities, so it’s a rather daunting task! We try to find through-lines on features and game elements so that all games can benefit from positive changes, but our primary focus is to ensure each game continues to be its own game with the focus and play that fans of that game have come to expect from it.

Emma Bridle: Our community really has a seat at the development table with us. We’re building games for them and so it’s critical that we understand them and have a two-way conversation. They give us feedback, and suggestions and then help us test new content before it launches through our Public Update Preview Program and other avenues.


We have a centralized Customer Voice team who are listening all the time and work to create feedback processes that work for all our various development partners in terms of communication, ingestion and triaging. We’re constantly looking at how we do this so we can do the best job possible not just ensuring our players have a voice in our development, but that we’re communicating back to them as to how they’re shaping the games. They’re giving us their time to share their feedback with us and we want to ensure that they see a return on that investment of time.

Age of Empires has a distinct look and feel, and this can be seen across all titles. Collaborating with different studios and creating new content for older titles, how do you keep that same level of consistency across all games?


David Phan: The visual style is critically important to us as it directly relates to the quality of the gameplay experience. It is integral that the readability of units and buildings in Age of Empires is a top priority for all teams. This mandate for gameplay readability is well understood by all teams working on Age of Empires. It ensures we have a unified standard to create our beautiful game art across all of our titles. 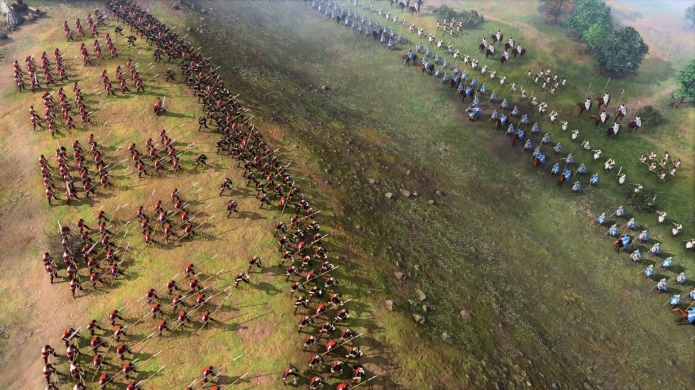 Historical accuracy is a key component of AoE, but not the main driver for design. How do you approach keeping that level of history there but also maintaining the fast pace and engaging action of the franchise?


David Phan: Getting history “right” is indeed a pillar for the Age of Empires franchise, but having engaging and fun gameplay is the most important thing. Age of Empires is a game after all. With our game design and specifically the design of our Civilizations, we take direct inspiration from the history of these rich and diverse cultures to come up with gameplay mechanics.

"Getting history “right” is indeed a pillar for the Age of Empires franchise, but having engaging and fun gameplay is the most important thing. Age of Empires is a game after all."


We’ll often have design discussions about how historically accurate the mechanic should be versus how many “historical liberties” we should take. We like to think we strike a good balance between accuracy versus being gameplay centric.

As stewards of a franchise, how does World’s Edge view AoE from a big-picture perspective? Is there a long-term roadmap per title that goes far into the future?


Adam Isgreen: We love the entire series of Age games. While I can’t go into a lot of detail here, know that we’re constantly discussing what’s next up for each title and how we can best support the community in the long run.

We’ve been so thrilled to see the positive reactions to all the announcements and the community is so excited about what’s coming next. We’ll continue updating our players as we go, through roadmaps, blogs, etc. So, there’ll be more information coming soon!
Tweet