We've taken Kratos and Atreus on an almighty journey in sequel territory. Is it as good as the OG?
Realms Apart | Our In-Depth God of War Ragnarök Review
Age of Empires is Coming Soon to Xbox - Here’s Our Big World’s Edge Interview
Post by KostaAndreadis @ 04:52pm 02/11/22 | Comments
With Age of Empires II and Age of Empires IV coming to Xbox in 2023, we chat to World's Edge about the decision, challenges, and what to expect. Celebrating its 25th anniversary this year, Age of Empires is continuing to find success on PC thanks to the likes of Age of Empires II: Definitive Edition and the long-awaited debut of Age of Empires IV last year. With new content coming to these releases on PC, and an Age of Mythology Retold on the horizon, the team at World’s Edge and its several development studio partners are certainly keeping busy.

But perhaps the biggest surprise (even bigger than Age of Mythology’s return) from the recent anniversary celebration was the announcement that the classic RTS franchise is making its way to Xbox. Real-Time Strategy games definitely have a home on PC, thanks in part to the platform’s unique keyboard and mouse control setup, but that hasn’t stopped the genre from dipping its toes into console waters. From Blizzard’s StarCraft making an appearance on the Nintendo 64 to Xbox Game Studios working with Ensemble Studios and Creative Assembly to bring Halo Wars to Xbox.

Age of Empires II: Definitive Edition is one of the most beloved strategy games ever made and coming soon for the first time on Xbox and Xbox Game Pass, featuring brand new mechanics optimized for controller for both new and seasoned players alike. Enjoy 200+ hours of historical campaign gameplay, 1,000 years of human history and 35 civilizations from the comfort of your living room.


As one of the most popular (and genre-defining) releases in the wider RTS genre, Age of Empires II coming to Xbox is something the team at World’s Edge is taking very seriously. From leveraging Xbox hardware and the ability for the consoles to support keyboard and mouse input, but more importantly tuning and refining all aspects of the game to support controller input. This means a more streamlined UI and creating assistance for the controller to make building a structure as intuitive as it can be.

Related: 25 Years of Age of Empires: A Roundtable Interview


The plan is as follows: Age of Empires II: Definitive Edition is coming to Xbox on January 31, 2023, with Age of Empires IV coming later in the year. And with that we sat down with Adam Isgreen, Creative Director at World's Edge, to discuss the Age of Empires Xbox journey.


Adam Isgreen: Likely the biggest concern was that a mouse is a precision action device. You point at things, and you target specific locations and items. The controller is not that at all. It’s a driving device, where you’re steering or pushing something, so working around that required a complete evaluation of how we can get the level of control and fidelity of options that a PC player has open to them with a radically different device philosophy. Lots of time and work went into honing this across many teams. There’s a host of other things we went over, from graphical fidelity to memory to loading optimisations, video streaming, game size, and everything in between. Since the console is a fixed platform in terms of power and performance, it does make some things easier. But it does force us to ensure we deliver a great experience for those specific specs.

Translating and mapping those point-and-click RTS consoles to the controller is not an easy task, did the team also look at UI changes and revisions to support this? Or even towards other console RTS games like Halo Wars?


Adam: We’re fortunate that people on the team have built RTS games on console before, and other teams at Microsoft as well, so we had plenty to evaluate, review, and lean from as we approached our UI. We’ve centered on a radial UI for Age on Consoles and Cloud, with a primary emphasis on ease of access to ensure you’re never a few button presses away from anything a keyboard player could do.

"You point at things, and you target specific locations and items. The controller is not that at all. It’s a driving device, where you’re steering or pushing something, so working around that required a complete evaluation of how we can get the level of control and fidelity of options that a PC player has open to them with a radically different device philosophy."


Additionally, we’ve got a host of assistances we’ve been testing out – from being able to place a building and say “find someone to build this” to quickly grabbing unit types without having to create control groups. We think players will be very happy with what we’ve got going for the controller [input]. Adding keyboard and mouse support for console players is a nice touch, in your own testing of this is the feel of playing classic AoE virtually identical to playing on PC - apart from being on a couch?


Adam: We’ve got the streamlined version of the UI graphically (a TV screen typically doesn’t have the visual space of a PC monitor), but it is locationally similar and functionally identical to the PC version in terms of control.

At what point did the idea of creating brand-new tutorials designed for controllers enter the conversation? And from a development perspective, how were these designed and tested?


Adam: It was an early conversation, as we recognized that many people coming from consoles may have never played an RTS game before, and even if they did, likely it was on PC. This required us to step back and think about how we could teach the new concepts in a digestible way that didn’t pressure people into managing every aspect of RTS gaming without learning the fundamentals first.

Fortunately, Age II has the wonderful William Wallace campaign, which was paced very well in terms of easing players into RTS concepts. This was a great place to start the conversation on what we’d need to do in order to bring players up to speed on how to play an RTS via a controller. 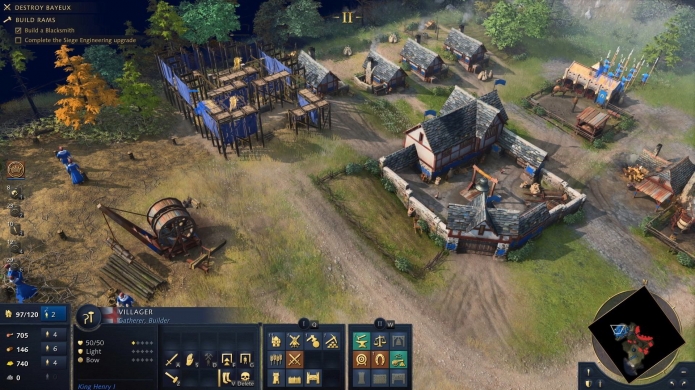 We’ve done a lot of internal and focus testing on the control scheme, and I’m excited to see how fast and competitive the console audience gets with it. We’ve tried to consider the controls from all aspects – from a new player to a high ELO competitive one – and I think we’ve got the functionality in there that all types of players will appreciate. If not, we’ll continue to evolve it as we work with the community on its improvements over time.

With Age of Empires 4 also getting an Xbox release, and with the game still being relatively fresh, was this a consideration prior to the game coming out or a post-launch endeavor?


Adam: Early in development on Age IV, we’d experimented with a complete touch version of the interface, but that was still built around the idea of a PC-like control layout. While we’ve always tried to keep the idea of a console and other input factors in mind, we started the experimental work on console controls with the earlier Age games so as not to distract the team working on building Age IV for release.

"We’ve done a lot of internal and focus testing on the control scheme, and I’m excited to see how fast and competitive the console audience gets with it. We’ve tried to consider the controls from all aspects – from a new player to a high ELO competitive one – and I think we’ve got the functionality in there that all types of players will appreciate."


We’re fortunate in that we have multiple teams and multiple engines supporting these games, so if a team has some capacity, we can experiment with ideas such as console controls to (eventually) benefit more than just that game. You can see this in other features, such as the Art of War missions, which we first put into Age II DE to gauge their popularity. Now, they’re a staple feature for all Age games going forwards.
Tweet