With its triple-slot design, the MSI GeForce RTX 4080 Gaming X Trio is huge. But so is its performance.
MSI GeForce RTX 4080 Gaming X Trio Review
Skull and Bones - Everything You Need to Know
Post by Steve Farrelly @ 04:37am 08/07/22 | Comments
AusGamers was given an early look at the progress of Skull and Bones, which has taken an interesting turn in its development life. Read on to learn what's changed... 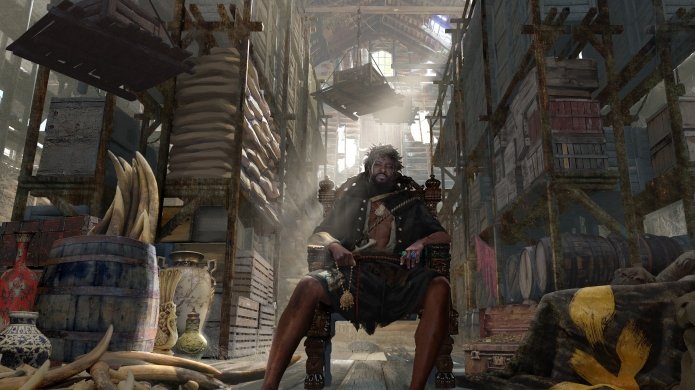 I last saw Skull and Bones at E3 2017 and then again in 2018 where I spoke to devs and the game seemed to be relatively on course for its originally-intended release window of 2019 (those links are stories from elsewhere, but still relevant). Obviously this wasn’t to be and we’re now just four years since that initial unveiling. However, in that time what initially started out as a more multiplier-focused affair has blossomed into a full-blown living, breathing open-world shared by players in a persistent online game-world.

You can now ready up to play Skull and Bones in co-op, solo or as an aggressor in an opt-in PvP setting. However you want to play, Ubisoft has thought of it and worked to facilitate that. And we know this because AusGamers was invited to check out an update on the long-gestating title ahead of its global reveal, and in the interest of filling you in on everything we know so far, we’ve compiled it all in a handy list you can check out below. 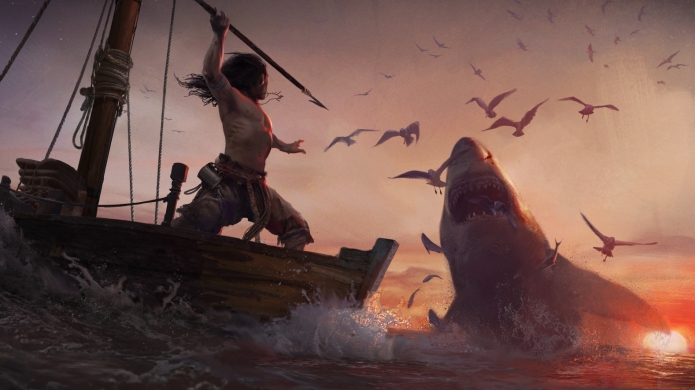 Game director Ryan Barnard says Skull and Bones is an open-world or, open-sea, title. And in many ways the setup here is a familiar one. You’re the sole survivor of a shipwreck in the Indian Ocean where you’ve washed up in an unknown land. You only have a small boat called a Dhow and a single spear, which you’ll need, as the world is immediately treacherous thanks to dangerous hippos, crocs, sharks and more.

"You collect items from the world around you, complete contracts from other pirates, craft items and explore...”


From this it’s not a stretch to consider Skull and Bones, at least in part, a quasi survival experience. You collect items from the world around you, complete contracts from other pirates, craft items and explore. And each of these aspects of the gameplay loop is deep -- the resources you gather, for example, need to be refined in order to be used, and you can’t build something or upgrade an item or ship unless you have the blueprint for it. And the more successful you in this area, the greater your renown will become.

“Forget everything you know about the traditional pirate fantasy” 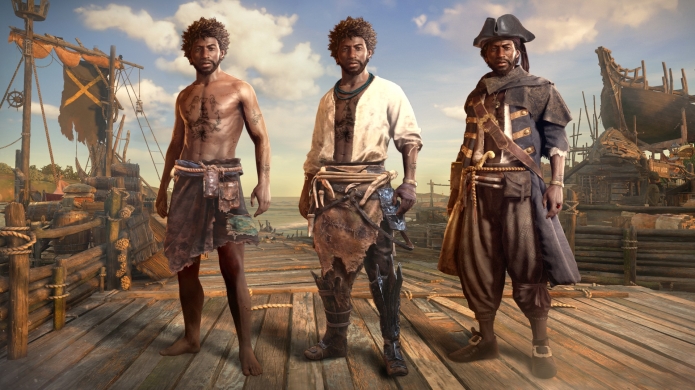 World producer Vanessa Seow described the hard to starboard shift in direction for Skull and Bones as now being “darker and grittier”, with a greater emphasis on the ruthless nature of piracy and what that life means and entails. To this end, Ubisoft Singapore has seen fit to include every aspect of life as a vicious cutthroat into the full experience. This includes staples such as plundering, combat, exploring and finding hidden treasure, but it also means tracking each and every step you take along the way via Infamy.

"And the more Infamy you gain, the greater the job opportunities...”


Infamy equals progression and through it you get more blueprints and designs for ships, weapons and armour. The goal is to build a fleet and be the most badass pirate you can be across the entire Indian Ocean, which will keep you working hard. And the more Infamy you gain, the greater the job opportunities with Barnard saying that new pirates from far and wide will come to seek your skills the greater your Infamy becomes. But of course, these tasks also get harder and harder the more infamous you become, which will feed into the game’s upgrade system and its economy in equal measure.

The (Not so Fluffy) Naval Stuff 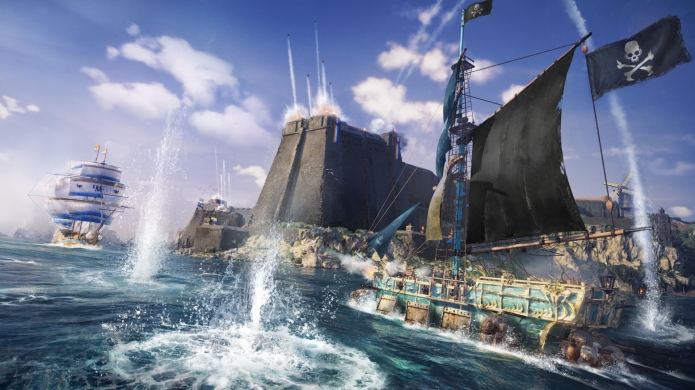 This is the core of the experience and it’s an area this studio has versed itself in better than anyone else, having handled all of the ship content of the past four Assassin’s Creed titles, which is ostensibly years of trial and error to know just how to get the balance of things right. However, here, Ubisoft Singapore gets to make this the game’s key focus, and it’s seemingly what the rest of the experience is built around. The key pillar mast, if you will.

"Make sure you’re not spending any time on the ocean bed as part of your pirate fantasy...”


And all the activities you do in the world lead to the naval stuff. You’ll fire cannons, shoot Greek Fire (ancient flamethrower tech), use Mortars, Giant Ballistae, Rocket Launchers and more, but you’ll also be protecting your ship which means armour and other equipment to make sure you’re not spending any time on the ocean bed as part of your pirate fantasy. And this comes back to how that game-world economy works.

There are also unique ships which play into a bit of a risk-reward system. Different ships serve different purposes. Cargo ships, for example, are bulkier and overloaded and therefore slow. A navigation ship (like a scout) is fast, but has less space for wares and isn’t as strong. And then of course you can have more heavily-armed ships that are good in a scrap if you’re on the offensive, but they’re harder to manoeuvre. How you deck these ships out is up to you as well, which is one part of the game’s seemingly deep crafting system and Ubisoft is promising a huge amount of customisation here.

It’s a Pirate’s Life For Me (and You) 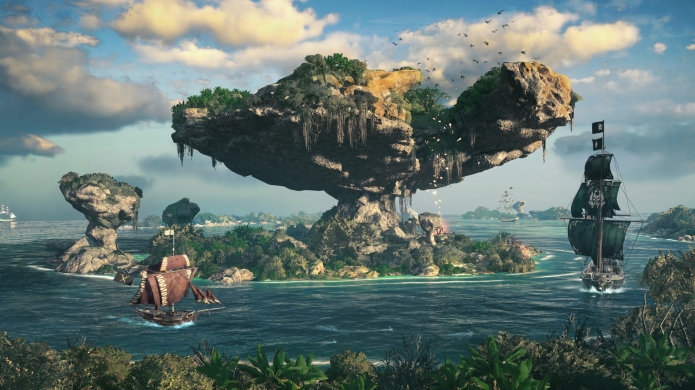 As mentioned earlier, you can play the game in co-op, or as a multiplayer affair. Dynamic world events scatter the persistent online seas and you’ll be able to group up with others you find out in the world. There is a sense here that this is your more dark and gritty Sea of Thieves, but I think that’s doing both games a disservice -- Skull and Bones in particular is simulation levels of pirating life, right down to having to stave of mutinous dogs on your ship by making sure your crew is fed, engaged and overall, happy.

"You can sink ships at range, which is safer for you, but you’ll only receive a portion of loot...”


This is all done by good ship management, meaning you need to store food and essential items for your travels because the last thing you want to be facing while hundreds of kilometres out to sea, is a ravenous, unhappy gang ready and willing to turn on you at the drop of a hat.

While out in the world you can scout opportunities as if this were Far Cry on water. In this way you can approach each scenario armed with information on your targets or on those in your vicinity, such as their strengths and weaknesses, and in just being aware of their number. You can sink ships at range, which is safer for you, but you’ll only receive a portion of loot. Perform a boarding manoeuvre, which is riskier, though, and you’ll come away a much richer person. 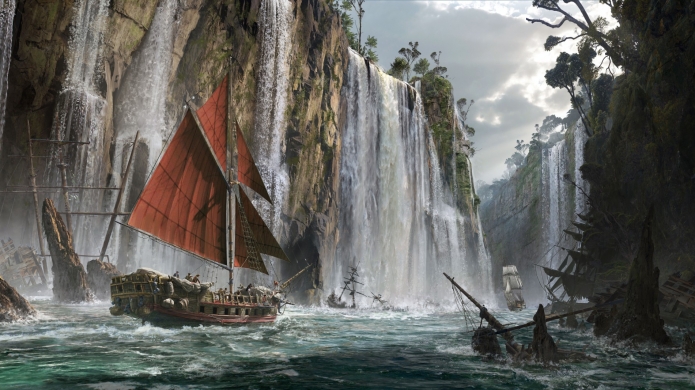 You’ll decipher treasure maps and visit outposts with hidden items and traders with rare goods. You’ll face weather so rough and dynamic, you’ll think it maliciously targeting just you; insane winds, rogue waves, thunderous rain -- all setting a tone and mood for adventure with a personality.

Speaking of personality, privateers acting on behalf of larger corporations will come after you as your exploits spread, as is the weight of Infamy in Skull and Bones, leaving the plank to dynamic combat, rich rewards and unique storytelling from an engagement perspective. What’s laid before us already in just a short glimpse of the game is incredibly tantalising and full of opportunity. And Ubisoft is promising a full post-launch plan full of free content for all.

It may have been docked for a while, but Skull and Bones has pulled out of port and is setting sail right into our must play sights, and we can’t wait to learn more and to get hands-on with it soon, so stay tuned.

Read more about Skull and Bones on the game page - we've got the latest news, screenshots, videos, and more!
Tweet