Overwatch 2 is launching this October, and with a big reveal stream showcasing what's in store, we break it all down...
Overwatch 2 - Everything You Need To Know
Day of the Devs: Summer Game Fest Edition Indies Showcase - Every Game Shown
Post by Steve Farrelly @ 04:11pm 10/06/22 | Comments
Here's a look at all the games that were shown as part of the Day of the Devs showcase... 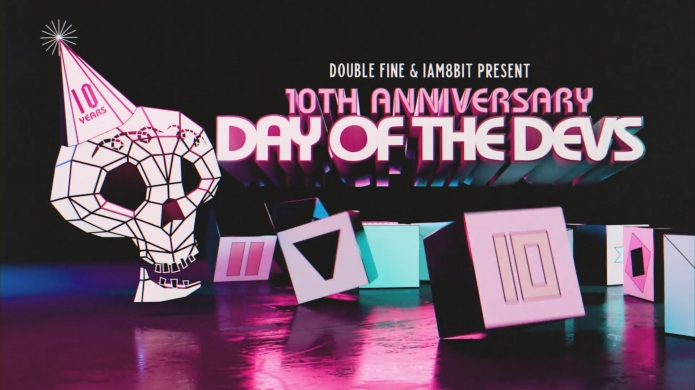 As well as the Summer Game Fest proper and Devolver Digital's Marketing Countdown to Marketing showcase, there was the annual Day of the Devs showcase, presented by Double Fine and Iam8bit.

Here's everything that was shown.

Desta: The Memories Between

Relive memories, rediscover friends and fix past relationships in this unique turn-based strategy exploration through dreams and regrets from the creators of Monument Valley and Alba: A Wildlife Adventure.

This whimsical game is part open world and part flight simulator – and you play it as a fly! You are provided with a bucket list that you can complete before you die. But the life of a fly is short – and the list is long! Go ahead and learn an instrument, become rich, read a book, go on tour, find yourself, get drunk, make someone laugh or enter the art world! And if you don’t feel like pursuing your life goals, just hang, clean your wings and watch television. Make the best of the time you have! Because we are all going to die. Michael Frei, the mind behind the games “Plug & Play” and “Kids” is bringing his upcoming title “Time Flies” to the PlayStation, Nintendo Switch and PC sometime in 2023.

Bear and Breakfast is a laid-back management adventure game where you play as a well-meaning bear trying to run a B+B in the woods. Hank and his friends find an abandoned shack and, equipped with their teenage ingenuity, turn it into a money-making bed and breakfast scheme for unsuspecting tourists. As your business expands so do the mysteries of the forest, and Hank soon finds himself uncovering a plot deeper than the wilderness itself.


A Little to the Left

A Little To The Left is a cozy puzzle game that has you sort, stack, and organize items to solve puzzles hidden among household objects. Keep an eye out for a mischievous cat who will occasionally undo your tidy work.

ANIMAL WELL is a game full of puzzles and secrets, some obvious and others deeply hidden. Explore a dense, interconnected labyrinth, and unravel its many secrets. Collect items to manipulate your environment in surprising and meaningful ways. Encounter beautiful and unsettling creatures, as you attempt to survive what lurks in the dark. There is more than what you see.

Birth is an adventure puzzle game about constructing a creature from spare bones and organs found around the city in order to quell your loneliness. Solve physics-based puzzles and discover secrets in lovingly hand-drawn museums, bakeries, bookstores and more.

Navigate an open-world island in an old train, upgrade it over time, and use it to fight an evil spider train named Charles. Charles is hungry; don't be his next meal.

Escape Academy is an escape room adventure game with co-operative multiplayer. It takes place at the titular and mysterious Escape Academy, where you can study to master the art of escape. Escape Academy also revealed its new launch date of Thursday, July 14.


How to Say Goodbye

How to Say Goodbye is a narrative puzzle game inspired by illustrated books. Move the elements of decor and manipulate reality to help a group of ghosts wandering between two worlds reach the "other side". But beware of the evil spirits that will try to keep you prisoner…


Little Nemo and the Guardians of Slumberland

Explore a dream world as Little Nemo, armed with toys, candy and stuffed animals in this colourful platforming metroidvania adventure.

NAIAD is a relaxing and colourful exploration adventure about flowing by a river. Interact with lots of adorable friends like fish, ducks, frogs, rabbits and more. Sing to regenerate the flora and discover little secrets. Enjoy a very personal game created entirely by a one-person indie game studio.

A young girl and her loyal friend embark on a rescue mission through a colourful world full of cold machines and unfamiliar creatures. Planet of Lana is a cinematic puzzle adventure game framed by an epic sci-fi saga that stretches across centuries and galaxies.

Roots of Pacha is a farming sim set in the stone age where you develop the ideas that shaped humanity.

SCHiM is a game about jumping from shadow to shadow in a challenging and lively environment. This 3D platformer takes elements of light and animation and adds them directly to the gameplay, delivering an experience that you will only find in SCHiM.


Fox and Frog Travelers The Demon of Adashino Island

Fox and Frog Travelers: The Demon of Adashino Island is a 3D action-adventure game with a Japanese-inspired atmosphere. You will play as Fox, a girl who finds herself on Adashino Island and starts traveling with Frog. Torii gates, food stall lanterns, and neon signs give light and color to the island. Something is lurking in the shadows, inching ever closer... " Fox and Frog Travelers" is currently under development by Rias, an illustrator and concept artist that came up with the idea for it based on one of his illustrations. The story of Fox and Frog's long journey through the night is planned for release in a few years.

The first game from young solo dev\loper Yo FUJII, Goodbye World is a narrative game about two young indie game creators, the shy Kanii and the extrovert Kumad, and the passion and struggles that come with game creation. Play through 12 stages of a puzzle platformer while following the two protagonists through 13 chapters of their story, rendered in beautiful pixel art in a resolution close to the Super NES and Game Boy Advance. Goodbye World is due out on Steam later this year.


Many of these games are either bound for 2023 or are even still in Kickstarter phase, while others are scheduled for this year, but Indies being Indies, release dates aren't entirely set in stone.