We sit down with Zenimax Online Studios to discuss The Elder Scrolls Online’s latest year-long adventure, adding a competitive card game to the MMO, and more…
The Elder Scrolls Online: High Isle Interview
Interview: WWE Superstar Rhea Ripley Talks WWE 2K22, WrestleMania and what's Next for Her!
Post by Steve Farrelly @ 05:21pm 01/04/22 | Comments
We chat with WWE Superstar and humble Aussie, Rhea Ripley about her career so far, WrestleMania, WWE2K22 and what's next for her... 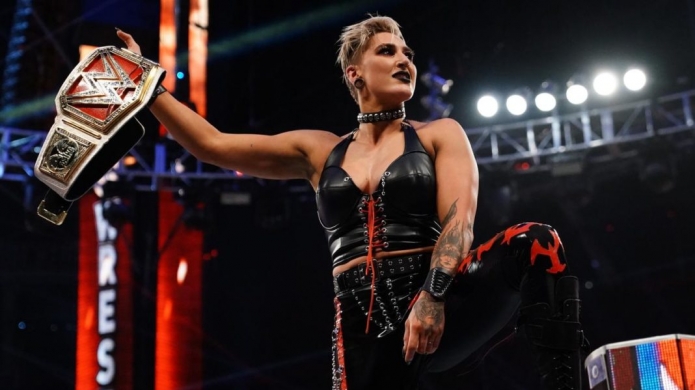 Congrats to you on your career to this point! As Aussie we’re always stoked for our brethren who are successful in whatever they do. And it’s particularly good seeing someone breaking through into the WWE… and obviously WWE 2K22 is the reason we’re here today, so can you talk a bit about your journey to WWE, and then what it means to see yourself represented digitally for millions of people?

Rhea: Yeah. So my journey in wrestling has been extremely wild. Obviously I started in Adelaide, South Australia for Riot City Wrestling [and] I grew up watching WWE and never thought that I would ever make it here. [I didn’t] even know there was wrestling in Australia to begin with! Then I found it and I never really looked back -- tried out when I was 16, got in and went to Japan for three months when I was 17 and then I got a WWE tryout and I’m here today! And it’s just been a wild, wild ride; a rollercoaster of emotion. But to see how far Australian wrestling and myself have come, over the last, like, nine-years is insane. And to know that I get to be in WWE 2K22 which looks incredible is wild to me -- a kid from Adelaide, South Australia is in the game… it’s a real proud moment for me.

It looks so spot-on as well, I can’t get over it. Like, I was watching my entrance from the reveal and it’s wild to see what [developers] can do with these games these days! I grew up playing things like Crash Bandicoot, you know?! And to see myself in a 2K game is… insane… but at the same time I’m loving it (laughs).

On the topic of your journey -- you said that you didn’t even know that there was a pathway to get to where you are now… and we’ll get to that in a bit, but focusing on you: was the workload and the amount that you have to put in, of yourself, what you expected? You know, things like this -- having to chat to lowly games journalists from back home about the game you’re featured in? As well as things like the house shows and prepping for a PPV -- were you mentally and physically prepared for all of that?

Rhea: I don’t think I was mentally prepared for all the stuff that would come with being a WWE Superstar. In Australia (at RCW) we wrestled, maybe, once or twice a month. Twice if you were lucky, and if it was more than that, you were really, really lucky. So to come here (WWE) and slowly build myself up and build my name up to the schedule that I have today, it took a lot of prep. And a lot of getting used to. I don’t think you can ever really get used to all of the stuff that we get dealt, because honestly… especially around this time; ‘Mania time, ‘Mania season… there is SO much going on. Media appearances, shows, TV, house shows; house loops -- my schedule is very, very jam-packed and it’s taken a lot to mentally prepare for.

[But] it’s definitely been gruelling, but at the same time so rewarding.

When you were in SA and doing stuff in the Indie circuit, how far had the WWE come in terms of the elevation of the Women’s side of the competition? I’ve been a WWE fan for a long time, you know, since there was an F in its name, and I went through the Diva era and that sort of thing as a fan, and I have a 10-year-old boy who watches with me, and there’s no delineation for him between the Men’s and Women’s camps. His favourite wrestlers are yourself and Becky Lynch, over any of the male wrestlers. Do you feel like you’re a part of that natural evolution of the equity of the WWE?

Rhea: I’m very proud of how far the Women’s Division has come. When I was in Australia watching it, they didn’t get the time or the opportunities that we get today, but they were still fighting for it, every single Monday and Friday; fighting for their spots and what they were doing on TV and just really did pave the way for the Women’s Division these days. And to see how far it has come over the last nine-years… is absolutely insane. And I’m so proud of everyone and all the hard work they’ve put in because like you said, your son: his favourite wrestlers are myself and Becky Lynch and that is absolutely wild to me. Like, I LOVE that and I’m glad that you told me that because it’s obviously made my day.

[In the] Women’s Division, we worked and worked, and work and work, and all that we wanted to do is prove that we can do everything that the men can do, if not better. And I think we finally started showing everyone and they’ve started accepting that. But it started a long, long time ago. It didn’t start with us, but I think we’re definitely continuing that elevation of the Women’s Division so I’m excited to see what the future holds. I think that it’s definitely going to increase and get better and I’m very proud that I get to be a part of it. And I get to go out there and do the one thing that I love most and prove to everyone that they can do it too -- possibly inspire some young females out there, or young boys, to just live their dream. And I think that’s the most special thing about wrestling.


Awesome. Let’s get back to the pathway in Australia, because I’m very interested in that -- because not many Aussies have broken through. I know there’s quite a lot working Indie circuits and competing brands, around the world, but can you… I guess talk a little bit about your experience with that and whether the opportunities, as you see it, are growing or if you still see it as a bit of an uphill battle and if so, is there a solution?

Rhea: Yeah, so when I first started at my tryout at Riot City Wrestling, my coach went around the circle and asked us all what we wanted to get out of wrestling and a lot of people said that they wanted to make it to WWE and he flat out told us that it probably wasn’t gonna happen because they (WWE) don’t really look at Australians. And that was a fact at the time. But, fast forward… they have SO many Australians here now (and they had more before), and it’s amazing to see how big the Australian wrestling scene has grown over the years. Like, the hard work is definitely paying off and I feel like it’s not as… I don’t want to say “difficult” because they’re still putting in the work and the effort and blood, sweat and tears, but they’re definitely getting looked at a lot more than when I first started.

Unfortunately with the pandemic we haven’t been able to (come home) for the last few years, but I have high hopes for the next few years coming that we’ll get more Australians. And with everything opening up we will be able to go back to Australia and then we’ll be able to do tryouts and and they’ll be able to see everyone that has put in the work and been grinding and clawing throughout the pandemic to stay on track and get better and hone their craft, just for these opportunities.

So I really, really think that Australia is gonna get looked at closely soon. Though that’s just my belief, I don’t [officially know what’s going on but I do hope we do grab some more Aussies soon.

What’s next for you, and your own personal elevation within the WWE ranks? Because you’re around the top all the time; you [seem] to get mad pushes, and rightly so… I feel like the sky’s still the limit for you…

Rhea: Thanks (laughing). I don’t really set goals or boundaries for myself. Or like a roof to hit. I just wanna see how far I can get in this business by pushing through all the [barriers] and making history and I want to keep going until I can’t go anymore. So I don’t really know what the next step for me is. I mean, I’m going to WrestleMania and tagging with Liv Morgan, so hopefully we can grasp the WWE Women’s Tag Team Championship together, I think that will be pretty cool. But apart from that I would love to possibly go to Smackdown and win the Women’s Smackdown Championship -- it’s the one that I haven’t held yet, and then I’d be the first grand slam champion to have the NXUK, the NXT, the Raw, the Women’s Tag Team AND the Smackdown Women’s championships, so I think that would be pretty cool.

I’m here for the long run and to make history and to prove to everyone that us girls can go and give the guys a run for their money.

Who do you like working with, in both a tag team setup, and as an opponent?

Rhea: (Laughs) my answer for this one is always the same: Raquel Gonzales. She is… absolutely intense and we were in the same class at the WWE Performance Center in Scotty 2 Hotty’s class, we were the only two girls among a group of lads and so we know each other like the backs of our hands. And we not only beat the absolute crap out of each other, but we also work really extremely well together as a team as well. So she’s my number one.


Check out the embedded video above of Rhea offering a warm hello to this writer's son, who is a massive fan of hers. And tune in to WrestleMania to see if she and Liv (our favourite pairing, actually) can take home the belts.