Going hands-on with a preview build and playing through the first two chapters of Tango Gameworks’ Ghostwire: Tokyo, there was definitely a lot to learn and discover about what type of experience it ultimately is. Even after our recent hands-off preview we were left wondering how it felt to play, whether or not using your hands as makeshift supernatural firearms was as fun and interesting as it looked, and would getting to explore a slice of Tokyo by freely moving through streets, alleyways and rooftops live up to the promise of, well, exactly that.

Normally a preview focuses on a small specific chunk of a game, a taste of the broader meal that is the full release. Here the first two chapters of Ghostwire: Tokyo offer up roughly eight hours of immersive open-world exploration, cinematic storytelling, side-quests and first-person supernatural combat. And with that it’s hard to dig too deep into how it all plays and feels without coming off as a review-in-progress. The combat is engaging, strange-at-first, but simple in how you expel wandering spirits back to the spirit realm. Which, judging by the vibrant pyrotechnics on display, is where Tetris Effect and Geometry Wars take place.

Exploration is very much typical of an open-world you’d find in a Western-developed title; icons representing objects of interest, story missions and side quests. Torii Gates peppered throughout Tokyo to lift the spiritual veil/fog of war to reveal new areas, new stories; new things to see and do. Structurally it’s all stuff we’ve seen in one form or another, but the modern-day Tokyo setting works wonders in bringing a fresh and downright immersive feel to what you could easily dismiss as formulaic.

The combat is engaging, strange-at-first, but simple in how you expel wandering spirits back to the spirit realm. Which, judging by the vibrant pyrotechnics on display, is where Tetris Effect and Geometry Wars take place.


Getting to explore an abandoned Tokyo at-night (with vanished citizens leaving behind their clothing) is eerie, beautiful, and not as scary as you might think. That said, venturing into an abandoned subway with creepy ghosts wandering about will never be anything but.

Ultimately there’s a keen sense of feeling like a digital tourist here, which brings to the fore the commendable level of detail and care put into Ghostwire: Tokyo’s open Tokyo environment. It’s as dense and vertically awe-inspiring as it is wholly unique. You can ghost-grapple up to rooftops and, err, ghost-glide around too.

The level of care and attention to detail that can be found across many of the game’s elements are not only impressive in their authenticity but thematic value too. Collectibles and side quests often highlight Japanese culture, both modern and historical. Enemy designs are rooted in human emotion; horror and tragedy, the list goes on. Where the idea of a Torii Gate might sound like a “stand-in” for a tower to activate in an open-world game, a lot of that structure fades away the more you begin to bask in the moon-lit and artificially-lit Tokyo cityscape.

Reminiscent of the real-world locale, sans-people of course, the result is street lights, billboards, signs, cars and buildings outputting light in a way that ramps up the eeriness but also the beauty and detail that has gone into recreating a small slice of the famous city. The only real comparison we could think of when playing was the brilliant Yakuza Like a Dragon, which also used its modern-day Japan setting to present a new twist on the classic turn-based RPG formula.

Tango Gameworks has delivered something truly stunning and cutting edge here, a piece of digital escapism brought to life thanks to the power of the PlayStation 5. It’s on this platform we played, and here we got to witness one of the best console uses of real-time ray-tracing to date. Which also doubles as a nice reminder on just what ray-tracing can bring to an experience. Which is about more than upping the pure visual beauty in the realism stakes, it’s about immersion.

Tango Gameworks has delivered something truly stunning and cutting edge here, a piece of digital escapism brought to life thanks to the power of the PlayStation 5.


The loving way each street and alley and building has been recreated and imagined by Tango no doubt serves as the foundation, and with so many lights and windows and other reflective surfaces (not to mention rain), the ray-traced reflections truly add a new dimension to the simple act of walking down a street or road. Ray-tracing is about bouncing light and properly calculating trajectories and things. Complicated stuff, and when it comes to reflections this means the ability to see any and every object (including those behind and above you) reflected in a surface. 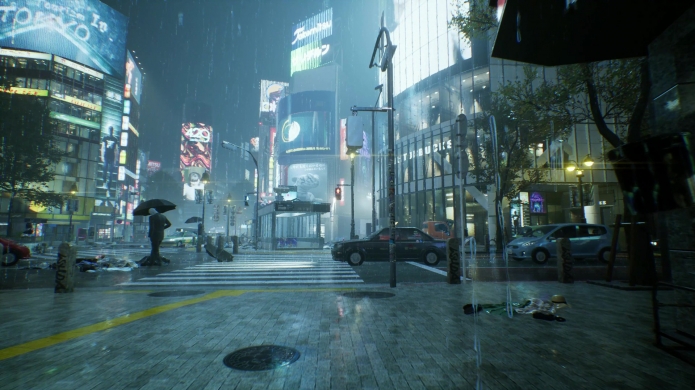 In Ghostwire: Tokyo this could be the raised lights of a building in a puddle, the shops on the other side of the street as you look at a windowed storefront, or even what might be around a corner. The fact that Ghostwire takes place in a highly vertical urban setting makes the reflections all the more important to sell the feeling of being there in an abandoned Tokyo. With ray-tracing you get that extra layer of depth and detail, turn it off and the difference is immediately noticeable.

Without ray-tracing, reflections begin to look “like a game”. Fine for the most part but not the eye-opening spectacle Ghostwire: Tokyo can be. For an open-world that features an overall design that feels familiar it’s the setting and combat that helps Ghostwire: Tokyo transcend its framework. And after playing a decent eight hour sized chunk, we can’t wait to jump back in and play some more. Stay tuned for our full review.