A slice of life full of meaning, and an Aussie made gem to boot
Wayward Strand Review
Microsoft Flight Simulator Interview - The Impressive Australia Update and Creating a Living World
Post by KostaAndreadis @ 02:31pm 01/02/22 | Comments
With the stunning World Update VII: Australia available now, we sit down with Jorg Neuman, Head of Microsoft Flight Simulator, to talk about its creation and building a living world. “When we do a World Update we like to go deep and figure out what the soul of the country is,” Jorg Neuman, Head of Microsoft Flight Simulator says. Since the debut of Microsoft Flight Simulator on PC back in 2020, the sim has captured the attention of countless budding pilots and digital tourists the world over. Thanks in part to how it uses real-world data, AI, and the cloud to create a stunning one-to-one recreation of the entire planet. A feat that is still mind-boggling to wrap your head around.

Since launch the sim has made its way over to the next-gen console combo of Xbox Series X|S, bringing the world of Flight Simulator to a new audience. Not only that but every step of the way the team at Asobo has been steadily and readily updating the experience with free add-ons, new modes, and refining just about every aspect of Microsoft Flight Simulator. With that some of the most notable updates being the free World Updates that take specific countries and locations, bringing them one step closer to realism.

With new photogrammetry, hand-crafted locales, and cities given a fresh coat of digital paint, each World Update has been met with open arms. Which makes the latest, World Update VII: Australia - something special for local Flight Sim fans. Featuring an impressive 11 cities - Adelaide, Sydney, Melbourne, Brisbane, Perth, Hobart, Cairns, Darwin, Townsville, Bunbury, and Mackay - it's also the biggest to date.

And a process that involves collaborating with many people.

“Internet research only gets you so far,” Jorg Neuman explains. “And given that Australia is pretty far away, we needed partners. One company we teamed up with was Orbx, who are a Flight Simulator Add-On developer. They’re in Melbourne and they know the country better than someone like me. Obviously we talked to Microsoft in Australia too, and they gave us a list. If you go by popularity or only speak to a few people you end up with the big population centres, so we reach out.”

“When we do a World Update we like to go deep and figure out what the soul of the country is.”


“Typically we end up with 500 things we want to add and we whittle it down to about a hundred things or so,” Jorg Neuman explains. “When you get to like the last 50 to cut, it becomes difficult.” As per the trailer for the Australia update, it includes a number of iconic landmarks, from Uluru to The Twelve Apostles, and Three Sisters to name a few. All of these have been in the game since launch but were rendered via the original satellite system used to create vast areas of the globe. Good enough for a fly over but any sort of close-up look revealed inconsistencies and inaccuracies.

The same can be said for the Great Barrier Reef, which now looks like the real thing. One of the main collaborators for these World Updates is Bing Maps, where high-quality photogrammetry is used to create a more accurate world. This also ties into a collaboration with GeoScience Australia, where a three terabyte height map provides the data required to render accurate cliffs and mountain regions. 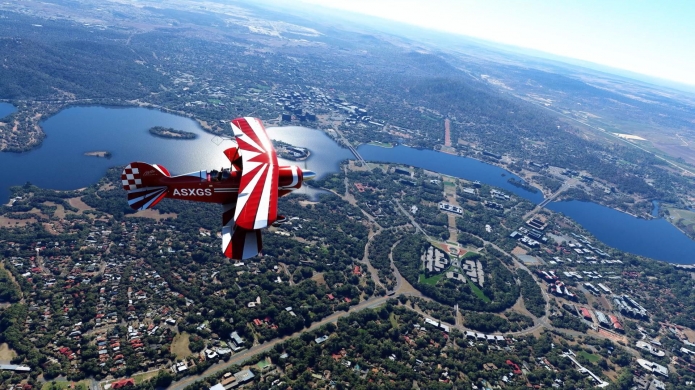 All in all the results are incredible, and with the World Update this also leads to new in-game activities covering Discovery Tours and Bush Trips. “We have six new Discovery Tours in total,” Jorg Neuman says. “There’s one over the Gold Coast, which is a place not a lot of people outside of Australia know. There’s one for Sydney, Perth, Melbourne, Uluru. We’ve also added new Landing Challenges and also some very cool Bush Trips. There’s flying over Tasmania in a Cessna 208 Caravan which is cool, we have Canberra to Melbourne in the Cessna 172. There’s also a Sea to Desert flight, from Whyalla to Coober Pedy and another over the north of Queensland covering Cairns to Hamilton.”

“Typically we end up with 500 things we want to add and we whittle it down to about a hundred things or so. When you get to like the last 50 to cut though, it becomes difficult.”


With the impressive console port, monthly updates, a Game of the Year Edition, and things like World Updates, the team at Asobo are still focused on the long-term outlook for Flight Simulator. One of the biggest updates to the game is due later this year, which will see the arrival of helicopters and gliders.

“Helicopters are definitely this year and gliders, which we promised too,” Jorg Neuman says. “Even with gliders it’s a big challenge because we have to change the atmospheric system. It matters how wet the ground is, where the sun angle is, how that creates updraft and thermals. It’s going to be cool though, I always say that I’m going to take a glider into the Grand Canyon and just see what happens.” 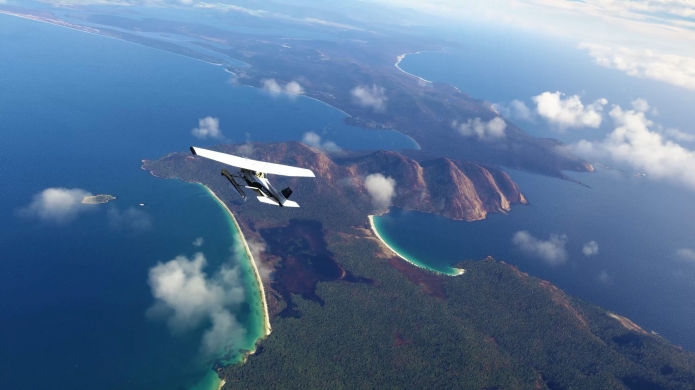 “When it comes to helicopters airflow is critical, because it’s an arbitrarily shaped body,” Jorg Neuman explains. “We just had a community stream where we showed some videos and it’s pretty mind boggling watching these things in any sort of detail. Adding helicopters is going to make all of the planes better because we’re getting into that level of detail where propellers are now bending correctly.”

At its core Microsoft Flight Simulator is a hardcore simulator, one where all manner of realism is taken into account. For example, the temperature of wings is based on wind resistance and speed at high altitudes. Which affects performance. “What we’re doing is a deep simulation of how helicopters work,” Jorg Neuman continues. “It's going to be interesting to see how the community reacts because when we’re looking at them we realise we’re going to have to create a bunch of assists. That's the beauty of simulation, being so accurate. But, you know, we want to help people who don't want to go that deep, who want to enjoy the experience. Which is a nice balance.” 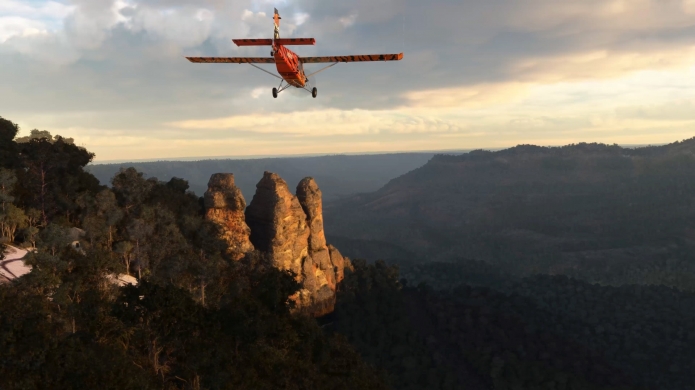 The simulation side of Flight Simulator isn’t going anywhere, but as we see with the Australia update the flight side and capturing the planet we all live on is still very much an ongoing journey. In terms of the long term outlook, the team has big plans to expand and truly create a living world to explore.

“Adding helicopters is going to make all of the planes better because we’re getting into that level of detail where propellers are now bending correctly.”


“The world’s alive,” Jorg Neuman emphatically states. “The way I think about it, there's the static world. That's just the geography. Then there's the dynamic world, which is the weather and seasons. There's so much more resolution we can get to. We had hurricanes and people were like, ‘wow, I can follow a hurricane’. How about thunderstorms, a super cell, one kilometre. There's no satellite that allows you to do that, they can pivot and track and the data exists. It's now just up to us to find a way to get that data into Flight Simulator.”

In terms of the dynamic world seasons are on the cards, the ability to visit and see locations as they exist at different times of the year. It’s an amazing feat because we’re talking about insane amounts of weather and data stored in the cloud, on Microsoft’s Azure servers, that Flight Simulator can call on and send out to players everywhere. 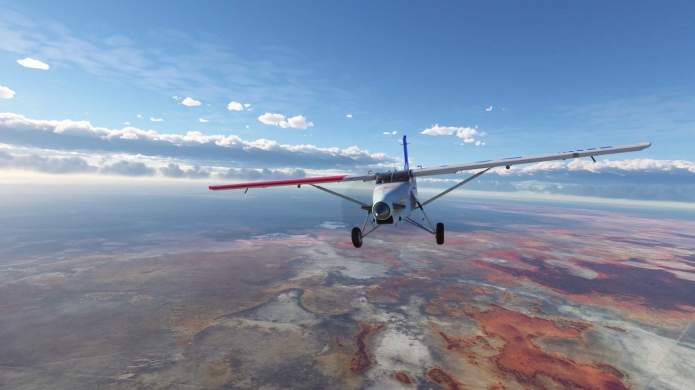 “I'm looking forward to seasons,” Jorg Neuman says. “I want to land in the snow and I want to see how an area changes throughout the year. The other day we were looking at this lighthouse and it was like on a coast with waves gushing. Looking at that exact same lighthouse in the winter and the water is all frozen. Those types of things I think of as the dynamic world.”

But it doesn’t stop there, as there are plans in place to go one step further and create a living world. “On top of all of that is the living world,” Jorg Neuman concludes. “And that can be mechanical things like cars and trains and ships. And then you get to animals and humans. That’s the ultimate goal.”