Zen 4 ushers in a new era for AMD CPU performance when it comes to straight-up gaming.
AMD Ryzen 7600X Review - Gaming Excellence
Hands-On with Halo Infinite’s Campaign
Post by KostaAndreadis @ 06:49pm 19/11/21 | Comments
As part of a special preview program we got to dive into the first few hours of Halo Infinite’s campaign, and it's a spiritual reboot in every sense of the term. The concept of the spiritual reboot, especially when it comes to games, is one that hearkens back to a specific time and place. Nostalgia may play a part in hitting the same high notes, but that should never be the goal. For Halo Infinite and its campaign the term certainly rings true, but through a modern lens that invokes the original as opposed to outright copying it. From lush expansive environments to giant alien architectural constructions, the sense of awe through scope is here. This is combat evolved by the way of Halo: Combat Evolved.

Halo Infinite presents the continuation of Master Chief’s story and that of humanity’s. It's a tale of one Spartan in a universe on the brink of all-encompassing conflict. Set several months after the events of Halo 5: Guardians it’s not so much a case of following those threads as it is presenting a thematically rich story that builds on some of the most memorable moments from set-pieces past.

Like the original from decades ago, the story and impressive environments go hand in hand with a robust shooter built on physics, verticality, arena-like strategy and pyrotechnic splash-damage. Plus, wonky but very fun vehicle controls. 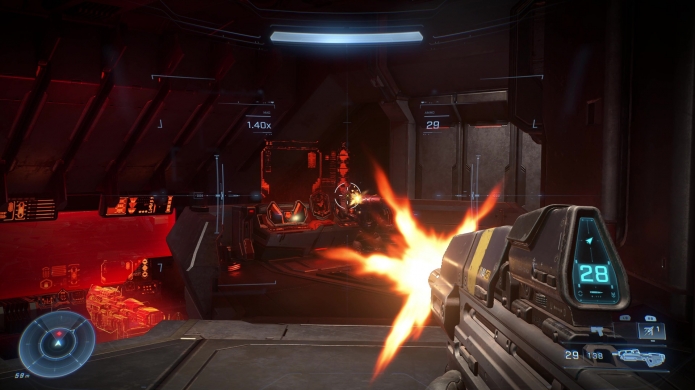 Halo Infinite feels right; the gunplay is tight, the weapons are responsive and the action is as spectacular as it is emergent. The sandbox quality of the series remains intact, elevated even, with the arrival of gadgets like the grapple-hook, and weapons that vary from militaristic rifles through to plasma beams that can disintegrate both a Banished soldier and their Ghost vehicle in just a couple of shots.

From lush expansive environments to giant alien architectural constructions, the sense of awe through scope is here. This is combat evolved by the way of Halo: Combat Evolved.


Being able to use the grapple-hook to create momentum and then “let go” to fly up or on an arc over the top of foes is brilliant. It’s one of the many reasons Halo Infinite’s multiplayer has already struck a chord with players -- it just works.

343 Industries is touting Halo Infinite’s campaign as the biggest in the series, and although size isn’t the be-all when it comes to anything, you quickly get a sense of this ambition the moment you step foot onto Zeta Halo. A large Halo ring made of high-tech alien installations and the sort of mountainous regions you might find on Earth. It’s here where the more modern open-world design is brought to the fore, with side missions and optional tasks presenting things like outposts to claim, soldiers to save, hidden caches to find and high-value targets to dispose of.

In the first four or so hours of the campaign the flow is never one where the story completely stops, just so you can choose where to go a la a modern action-adventure. Or, to grind for things you need like ammo. Instead it’s a case of emergent distractions between large-scale series staple cinematic missions featuring Master Chief, his AI companion dubbed ‘The Weapon’, and his deep-space saviour, the Pilot.

We Speak to 343 Industries About Halo Infinite’s Campaign


It should be said though that even though having x number of outpost things to take-over might sound repetitive, each one has a distinct feel due to the combat itself being so fast and fluid. It’s just always moving. And it’s here where the idea of playing Halo Infinite’s campaign in co-op sets off a hypothetical in-skull light-bulb -- and yeah, after getting to experience story missions and some of the side-stuff it’s a shame that co-op won’t be there on day one. In fact, it might be worth holding off on a 100% completion run until it arrives, the potential is that strong. 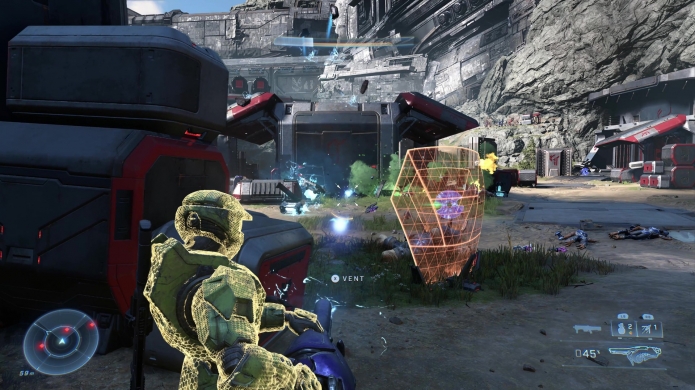 As for the main-story missions they’re not only well-paced and chock-full of bombastic story beats, but they almost immediately open up in terms of combat options. No drip feeding here, more weapons are introduced early and at a steady clip. So much so that there’s a sense that with only being able to hold two weapons at a time, you’re somewhat spoiled for choice.

Being able to use the grapple-hook to create momentum and then “let go” to fly up or on an arc over the top of foes is brilliant.


Someone at UNSC needs to design a Spartan suit that can carry a few more guns, or at least offer up a fancy backpack.

This could all come down to personal preference, but outside of the excellent controls -- that is, the just-about perfect gunplay -- switching between gadgets and grenades feels a tad clunky when playing Halo Infinite on Xbox Series X. It’s like the Xbox controller needs a few more buttons as you try and remember the d-pad combination to quickly bust out a shield, switch over to the enemy scanner, and then go back to the grapple-hook. For these old UNSC bones, simply leaving it to the latter was the go-to for most of the early parts of the game. 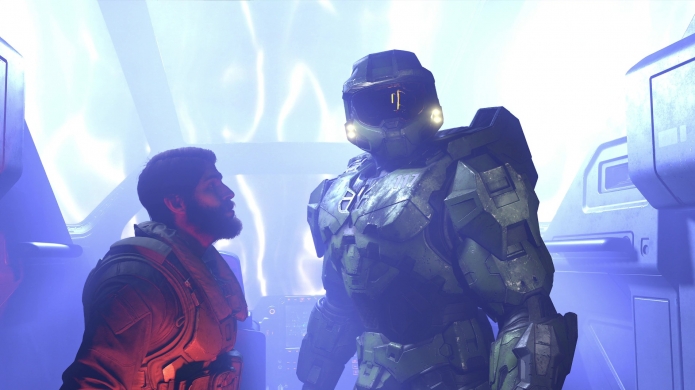 Okay, so let’s talk about the Halo Infinite campaign debut from over a year ago. It wasn’t exactly mind-blowing from a visual perspective, with flat lighting and some models and geometry that looked incomplete. We’re so used to scripted, highly polished vertical slices (these being gameplay demos created as standalone games), that it fell flat as a next-gen Xbox Series X showcase. On the account of it being a proper representation of the game at that time, and the power driving it.

What a difference 12 months and change makes. Outside of how great it feels to play, the second half of what you’d call ‘first impressions’ arrives with the look and performance on Xbox Series X. Both of which are wonderful. Outside of some washed out contrast in some cinematics (which needed an actual OLED adjustment) the visual quality here is a sizable step-up from the game we saw way back when. 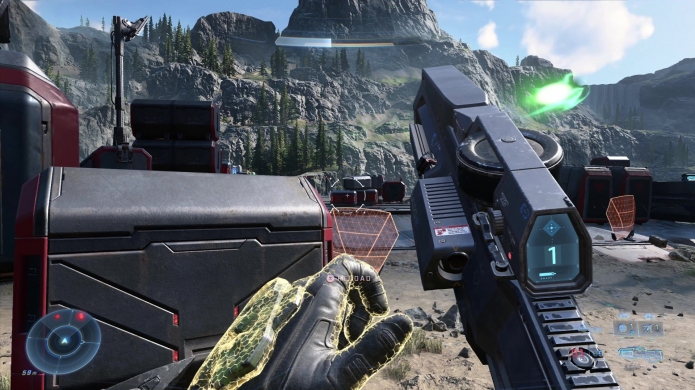 Texture and model detail might look mostly the same but the lighting and colours look more natural, with materials being particularly impressive. These are the metals, the fabrics, the scuff marks on weapons and Master Chief’s suit and visor. It’s an interesting juxtaposition to the characters, which all have a comical quality -- stuff like overly animated mouth and eye movement alongside broad and overly dramatic animations. Paired with the improved and realistic lighting it works great, and it helps bolster the look as a spiritual reboot.

What a difference 12 months and change makes. Outside of how great it feels to play, the second half of what you’d call ‘first impressions’ arrives with the look and performance on Xbox Series X.


Ultimately, playing a decent chunk of Halo Infinite’s campaign was refreshing. Not only in how it managed to feel like a new entry in an iconic series but in how it managed to live to and exceed expectations in a way that most recent releases haven’t. From its sparing and well-timed use of piano chords through to the hero shots of Master Chief standing all stoic and heroic like, Halo Infinite’s campaign is a confident return to form.

Read more about Halo Infinite on the game page - we've got the latest news, screenshots, videos, and more!
Tweet