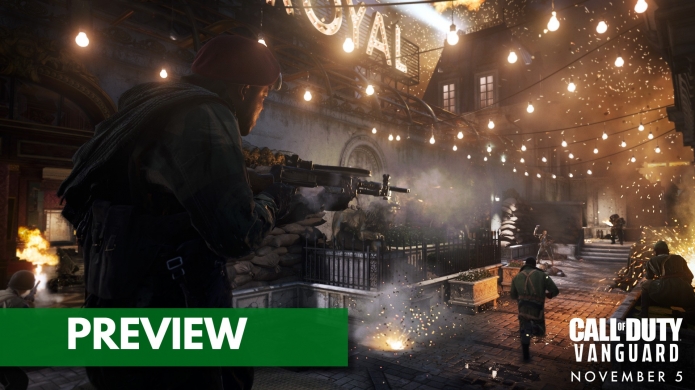 Call of Duty: Vanguard’s multiplayer beta kicks off this weekend (first for PlayStation owners), and we had the chance to dive into a number of the maps and modes that represent a taste of the game’s launch suite of multiplayer goodness. With Stephen playing on PlayStation and Kosta on PC we had the chance to check out the new Patrol mode, classic TDM action, Domination, Kill Confirmed, and Champion Hill. Instead of breaking down all of that we’ll focus on the first three, accompanied with footage captured on PC running in 4K at 60fps.

It should be noted, on PS5 the game was also running on the same spec. Though the redeem code we played on was branded PS4. So it was hard to discern whether this build was PS5 or PS4 Pro. It was mostly smooth though, which is what you want from MP over shiny visuals, but we’d be remiss not to highlight that factoid. So, console: fast, smooth and maybe not quite the PS5 build we’ll see in November, but fundamentally Call of Duty, so also fun.


As a brand new team-based mode, Patrol is one that plays into the strengths of fast-paced close-quarters Call of Duty multiplayer. So if you were wondering if the WWII setting might have slowed the pace, well, you’d be mistaken. This is quintessential CoD, albeit with old-timey weapons with that modern feel. Era-specific weapons that can be modded and changed according to the template we’ve seen over the years, with the ability to move quickly, slide around, and take out your enemy with a couple of well-timed shots.

"It’s the opposite of avoiding the circle in a Battle Royale, here you want to be in it as long as you can...”


So then what makes Patrol different from other team-based modes? Well this 6v6 addition to the CoD fold adds a dynamic and moving capture point that serves as the place where all the carnage happens. It’s the opposite of avoiding the circle in a Battle Royale, here you want to be in it as long as you can. This mobility adds a different feel to the Domination-lifted game style (seen below) in that your line of sight and potential points of vantage are always changing. With that things can devolve pretty quickly into a tug-of-war style battle of continual shifts -- which is cool in that the tide can shift quite easily, even if it seems one team is dominating.

It’ll be interesting to see how this tests after a few weeks out in the wild. It might very well be the most team-orientated mode the series has ever seen, where good communication with, and support from, your team becomes paramount to winning.

Playing on the Pacific map of Gavuto it’s pure chaos (with some very cool environment destruction), and if you’re a fan of that style, then yeah, Patrol is worth checking out.


That’s not to say that Team Deathmatch in Call of Duty isn’t chaotic, it most certainly can be -- and in Vanguard we got to experience all of that in the awesome Hotel Royal map. A visually impressive setting that’s multi-level, corridor-heavy, and open enough for two teams to go at it. With Vanguard built on the engine that powered the 2019 Modern Warfare reboot, here we get to see that game’s smooth presentation and improved lighting in full and matured. Though stopping to take in the sights isn’t something we’d recommend if you’re gunning for a spot higher than our patented middle-of-the-road performance.

Related: Changing of the Guard - An In-Depth Look at Call of Duty: Vanguard.

What stood out here, because really, TDM is just TDM, was the actual design of the map. The aforementioned multi-leveled setup meant finding targets and avoiding them was a unique affair of not just “what’s around the corner?” but “shit, who’s above or below?!?”. There are intricate lanes that immediately jumped out, and we did get sniped a number of times from hidey holes across the map, so the sense of CoD familiarity still existed, but rather than some of the more fishin-in-a-barrel level designs of games past, Hotel Royal best represented new spaces with newer opportunities in a more 360 degree kind of way.


Playing the objective in Call of Duty is a phrase you don’t often hear, on account of just how fast-paced and short the TTKs have been for a while now. Domination presents that typical capture point setup, though in defence of the design you have to stick right on the flag to capture it -- and that instills a sense of ‘playing the objective’. In the Beta, and our hands-on we got to play on a Russian wintery map, with the snow and buildings adding a distinct visual feel that suited the style of play.

"With Vanguard built on the engine that powered the 2019 Modern Warfare reboot, here we get to see that game’s smooth presentation and improved lighting in full and matured."


It’s worth mentioning that even in its Beta state, all of the modes and maps and performance we encountered (granted we were playing on a high-end GeForce RTX graphics card) was as smooth as you’d want -- and on par with the solid Call of Duty multiplayer that has become a series hallmark over the years. And really, the differences here are many but seamless. A new mode, new weapons, new Kill Streak rewards, new maps, but all with the same feel.

The major changeups we encountered outside of some of the stuff already mentioned, were destructible parts of the environment to open up new lines of sight for the player.

Larger-scale destruction is inbound as well, but it was able to melee down a window shutter, or door to find new cavities or vantage spots that stood out. Map knowledge hasn’t always been an absolute necessity in Call of Duty thanks largely to a pick-up-and-play approach to level design. This might actually be the first in the series, at least in a long while, we’re the city planners among you will walk away (or hide) with a definite advantage, specifically with the verticality, multi-leveled aspect of the maps we played.