You've known it was coming, but did you expect everything revealed?
In Kratos We Trust - God of War Rangarok Unveiled!
Back 4 Blood - We Go Hands-On with PVP and PVE
Post by KostaAndreadis @ 12:15pm 06/08/21 | Comments
Turtle Rock, the studio behind the original Left 4 Dead is back with what is for all intents and purposes a spiritual successor to the co-op action-survival hit. Albeit, one that feels every bit like a game from 2021 - for better or worse.

Ahh Left 4 Dead, you arrived back in 2008 and at a time when people were wondering if pop culture had room for another zombie related thing. Fast forward to the present day and it’s safe to say that the undead hordes will keep on coming. Unwanted viruses too. Ahem.

In a testament to that game’s classic status a lot of today’s co-op driven experiences, especially the ones where there’s shooting to be had, can often be summarised with “it plays like Left 4 Dead”. That is, four-player action where the goal is to get from Point A to Point B with as few cuts, scratches, bruises, or bite-marks as possible.

There is of course a lot more to Left 4 Dead than backs-to-the-wall shooting and screaming like Mac in Predator. But when taken as a framework, developer Turtle Rock doesn’t stray too far from the formula it first laid out. In Back 4 Blood you get campaigns broken up into levels split up by Safe Rooms, a story that’s seemingly “yo, let’s leave this place”, different playable characters to choose from, and a variety of surprises that means no two runs ever feel the same. 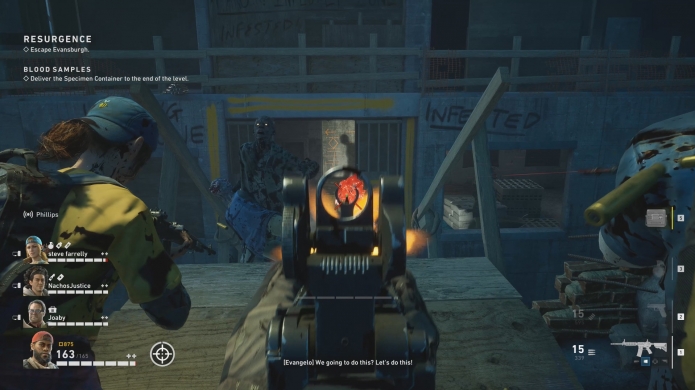 Being 2021 though, a lot of Back 4 Blood’s design feels modern. Which is a good thing. Other times it can feel as if things were changed just to change them -- like making Safe Rooms devoid of free fill-er-up goodies. Stocking filler stuff like fresh medpacks for everyone and crates full of ammo. Lore-wise there’s the strangeness of no one saying the z-word, they’re The Ridden you see. Then there’s the good stuff, playable characters that not only look diverse but act as classes. Each featuring their own abilities and team passives like extra health or movement speed. Very cool, and kind of expected given we’re now in the Age of the RPG-Stat.

When taken as a framework, developer Turtle Rock doesn’t stray too far from the formula it first laid out.


Throw in a setting that’s “10 Years Later” or some such, there’s a hub area/town of survivors that doubles as a place to train, customise, shop, launch a campaign run, or dabble in some PVP.

The class-like setup of characters you control also results in different starting weapons, and cards. Yeah, cards. Back 4 Blood’s card system is integral to both the variety you’ll find in terms of modifiers or mutators, but also for the bonuses and abilities you can take into a run or PVP encounter. Draw a bunch of cards from a deck and then choose a couple, like say, extra life or ammo.

Corruption Cards affect the overall run, ranging from something as drastic as changing what monsters might appear to offering incentives for approaching the action in a certain way. Like “don't shoot at or disturb the birds and you’ll get some copper”. Disturbing a group of birds in Back 4 Blood calls in the horde for some reason, and there are piles of copper to be found everywhere. Which can be used for healing via vending machine or at the many (sentient?) crates that sell you weapon mods and items.

You also need Toolkits to open crates (or weapon chests), adding another very game-y bit of design to the aesthetic and feel. Copper as a currency makes as much sense as a rectangle bit of cardboard offering you the makeover of the century -- a 10% boost to overall hitpoints. It works but can feel like a lot to take in.

New cards unlock the more you play and can be bought with an additional in-game currency back at base. Seemingly to the point where your characters can get a leg-up when tackling higher difficulties thanks to a rarer piece of cardboard. The various systems and mechanics at play in Back 4 Blood are infinitely more complex than Left 4 Dead’s simplicity, but are all about tangible and measurable progression you can see as opposed to a monetisation model. We’re told all cards and cosmetics are earned from play. 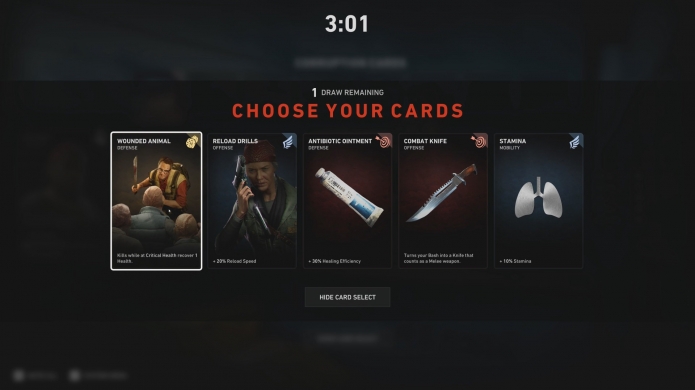 Back to the shooting of the rotting humanoids, the meat and potatoes of a game like this, a large chunk of Back 4 Blood’s design is centred around the idea of replayability. Of tackling missions over and over to get further. And with that the variety, especially in the PVE side of the experience, sees the return of the Game Director as a mechanic. This results in zombies and special zombies and bosses appearing in various places, or otherwise having them act dynamically.

Back 4 Blood’s card system is integral to both the variety you’ll find in terms of modifiers or mutators, but also for the bonuses and abilities you can take into a run or PVP encounter.


The arrival of a horde charging towards players, when you’re running low on ammo and health can also feel like it comes out of nowhere -- giving these encounters the chance to feel as tense as they often feel inevitable.

But it’s hard to say if Back 4 Blood has that level of tension, initially. Firing up a four-player game, taking on the first Act, the AG crew did so using the default (i.e. easiest) difficulty setting. Now, you might scoff at the very idea of that -- and if you do, please direct said scoff-age towards our Group Leader - Ser Jobius of Gilroy. He’ll probably tell you the same thing, it was the default “jump in and play” setting so... back off holmes.

Anyway, in its current state the default difficulty level in Back 4 Blood goes a step beyond easy, to the point where things like menace and tension felt like words in a strange alien language 34.6 light-years away on the planet Gorphaxis 5. It’s a shooting gallery and little more. Ramping things up to Nightmare (the third and highest difficulty -- which you can see in the latter portion of the video above) we last but a few seconds.

In a way, that was good. Level planning and knowledge should be required, and Left 4 Dead took a long time to master. Still, Recruit is so lacking you don’t really learn anything other than the zombiesRidden are as threatening as balloon animals with fangs and evil eyes drawn on them. This was gleaned from playing the Beta, with Turtle Rock later telling us it’s still balancing difficulty levels and will use the Beta as a way to gather the data it needs. It’ll also be looking at how players interact with PVP... which we also tried.

Alternating rounds of Ridden vs. Cleaners, where the goal is to see how long you can survive on small-ish maps with randomised drops and the same card-perk-ability system found in the campaign. Compared to the main PVE side of Back 4 Blood the competitive stuff, at least initially, feels a little tacked on and a little too “arena” in its design. Going back to the original Left 4 Dead one last time, the PVP there was more like playing the campaign with real people as the threats. So much so you could wait around corners or genuinely creep up on survivors.

In its current state the Recruit difficulty level in Back 4 Blood goes a step beyond easy, to the point where things like menace and tension felt like words in a strange alien language 34.6 light-years away on the planet Gorphaxis 5. It’s a shooting gallery and little more.


Here it’s “Round 1, Fight!” “Did you see that triple spin spit by the Ridden!” “What a save by the Cleaners” “They used that Card perfectly!”. More structured than emergent, there are even designated glowing climbing lanes for the Ridden. An interesting approach, but one we’ll need to spend more time with before learning its ins and outs.

Now, the comparisons to Left 4 Dead have been peppered throughout this preview because, a) that game rules and b) this comes from the same dev studio. In a lot of areas, Back 4 Blood impresses -- it feels like Left 4 Dead 3. The guns are great and the performance and polish is already at a place where you can feel that it’s in the final stretch of balance and tweaks and fixes. On PC performance with NVIDIA DLSS enabled makes it all look full-blown futuristic compared to the now dated original.

Is this the Left 4 Dead successor we’ve all been looking for? Possibly.
Read more about Back 4 Blood on the game page - we've got the latest news, screenshots, videos, and more!
Tweet