Gothic, dark, and fairy tale-like in nature, albeit one with a scope and breadth that feels wholly original -- even though its pieces might not be.
Lost in Random Review - A Dark and Memorable Fairy Tale
Roles-On with Magic the Gathering X Dungeons & Dragons - Adventures in the Forgotten Realms
Post by Steve Farrelly @ 06:27pm 03/08/21 | Comments
We had a very nub-friendly play with Wizards of the Coast's Magic the Gathering and D&D crossover, Adventures in the Forgotten Realms, here's how it played out... 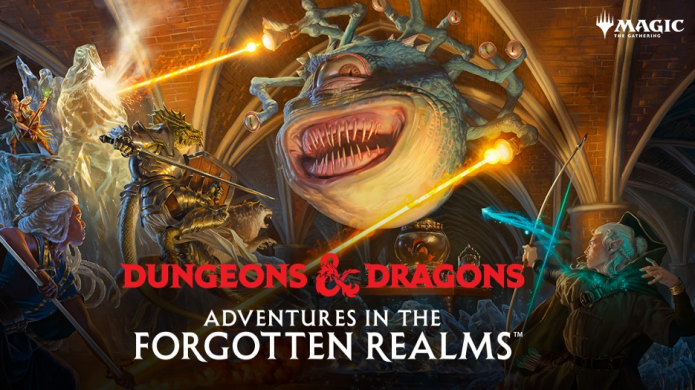 Lanik’s backstory is a fairly in-depth one, and one my new traveling companions and, indeed, our guide (DM), Dave Harmon, of the Aussie podcast, The Dragon Friends, were all impressed with. Here’s why:

Raised in the township of Enmore, which periodically spawns in creatures of such fantastic, incomprehensible origins, unscathed by common devices, Lanik studied the darker arts. Learning languages and tomes so sacred, mere utterance is seen as a form of self-harm for the power even a single syllable can bring. His devotion to the unseen, forgotten world beyond, and its myriad cultures, devoured his youth, forging a logical, meticulous person not easily swayed by emotion. His lot is to bridge a cold, relentless gap between worlds, whether to protect this one, or help in the other.

I also noted that Lanik’s favourite weapon is a “6,000 layer damascus broadsword, with an obsidian guard and a hilt wrapped in the tattooed hide of the first of his bloodline. The tattoos are protection runes”.

"He was also injured to within an inch of his life, and all after just 10-minutes into our foray as ‘out of your comfort zone’ players having a crack at the Wizards of the Coast X Dungeons & Dragons - Adventures in the Forgotten Realms...”


Lanik’s first swing of his sword in battle, with so much written hype and internalising from a personal perspective did... no damage. He was also injured to within an inch of his life, and all after just 10-minutes into our foray as ‘out of your comfort zone’ players having a crack at the Wizards of the Coast X Dungeons & Dragons - Adventures in the Forgotten Realms cross-brand event. But this didn’t faze me one bit, and as Lanik’s overseer I threw question after question at our very, very patient DM until I understood the cadence of how this all worked and after healing from a Short Rest (others in the party needed a spell, too) we were now a bit more ready to deal with not being as tough as we initially thought, but that our imaginations here were as much a gameplay system as the miniatures, cards, dice and crawl laid before us. 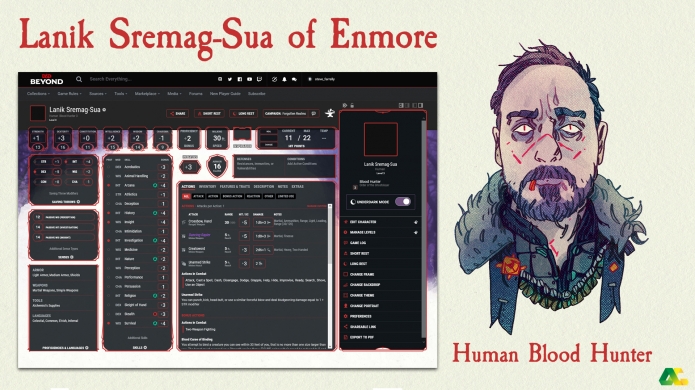 It should be noted, I played with four other peeps of totally unknown origins -- we were strangers to one another, and so came at the experience fairly green, but all with new ideas on how to play. It’s funny, because I grew up reading countless Fighting Fantasy books, and obviously videogames is my vocation, but the pen and paper and TTRPG stuff just, well, the opportunity had never really presented itself. Hell, prior to this first proper jaunt I’d helped sub-edit a D&D supplemental handbook called Wickerpunk; since Kickstarted and doing super-well for itself. So I’m not a stranger to the concept, potential for story, or explored themes. What I wasn’t ready for was the penchant for truly outside-the-box thinking you just can’t get in a videogame. Or the power of camaraderie in puzzle-solving a moment (ie, not an actual puzzle). The random nature of a roll of the dice -- a forever mechanic in so many games, becomes tangible and not like an invisible hand trying to play you, even if my dice rolls were facilitated through the D&D Beyond website and character page.

In short, while familiar in an ‘on paper’ sense (heh), the experience was excitingly new and somewhat liberating.

"And while I am familiar with MTG (mostly digitally), how the new cards -- which are the first cross-branded card set in Standard MTG, ever -- reshape your Magic thinking is pretty damn awesome...”


What made it all a bit easier to navigate was that this is Magic the Gathering featuring D&D mechanics. And while I am familiar with MTG (mostly digitally), how the new cards -- which are the first cross-branded card set in Standard MTG, ever -- reshape your Magic thinking is pretty damn awesome. There are some 260+ as part of the event, but in our short stint, which was to navigate as a party the “Lost Mine of Phandelver”, I only drew two cards from a freshly opened 15-Card Draft Booster pack -- an Artifact - Equipment card: Dancing Sword, and the other an actual map of the mine, which it turns out came in really handy later.

The dungeons and scenarios are actually based on D&D Adventures that exist, and so this cross-brand event comes with mechanics and items that are proven, but existing here in this space are introduced to newcomers, or those who’ve dreamt of both IPs crossing over. It also didn’t feel like a watered down version of D&D, and while I might not be qualified enough to make that statement, remember I have edited a 250+ page D&D supplemental, so I have at least some cred there. But really, what I mean by that is our DM still presented the adventure in a way a good DM does, with spaketh aplomb and fun delivery, especially to a group of nubs. This is facilitated with “flavourful keywording” which exists throughout thanks to cards such as “You Come to the Gnoll Camp”, a party Instant that gives you a “Choose One --” situation:We played our roughly three-hour session and in that time two of us were swallowed by a giant jelly, one of us pretended to be an emissary for a goblin god, one of us was attacked by mushroom spores and I almost died, twice. We teamed up concepts and plays, and challenged our DM with different ways to learn more about the world around us, and to also beat it. And not all of this was dictated by the cards. But that’s the beauty of the D&D side of all of this -- ad hoc adventuring at the mercy of imagination. Though I should also point out we had a small scale model of the mine we were going through, as well as miniatures representing our party and enemies and other components of the mine, so we didn’t have to cast our minds too adrift.

We finished all tasks we’d gathered before entering the mine, and those we emergently created while in it, without dying and I kind of felt that tug to want to know more, and to play more. Especially in the environment we’re in as a country right now, and also because I just wanted to uncover more of the Showcase Frames which highlights classic D&D modules and creature art. So there’s also a collectible side to it all now, which amplifies the crossover all the more. But what I thoroughly enjoyed most was the modular concept wholly realised in card form, but delivered in true D&D fashion, goblin boss voices and all. An utterly mind-opening experience, and one I’m deeply invested in now moving forward.

I just need to find (and make) friends to play with.