With its modern setting and overhauled Frostbite engine, Battlefield 2042 is not only the latest entry in the series - it’s aiming to push the sandbox into new and exciting territory.
Battlefield 2042 Interview - We Sit Down with DICE
Inside the House of Ashes - The Latest Installment in the Dark Pictures Anthology
Post by KostaAndreadis @ 10:14pm 28/05/21 | Comments
We sit down with Supermassive Games to talk about the latest entry in the Dark Pictures Anthology, and go behind-the-scenes to discover the process behind creating the studio’s particular brand of interactive cinematic horror. 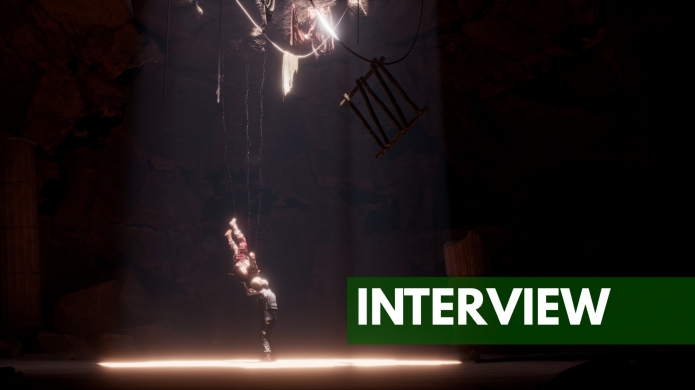 The Dark Pictures Anthology is a series of horror tales in the style of a book, television, or film series where each entry is separate but connected. Presented as character-driven interactive experiences that can be played alone or with a group, each story follows a similar presentation but still feels very much like its own thing. Kind of like The Twilight Zone, Tales From The Crypt, or Black Mirror. Here a mysterious Curator sets the scene, the location, the time, the place. And from there interjecting at various points to offer up advice and misdirection.

Set in Iraq, 2003. In the shadow of the Zagros mountains a military unit comes under fire from Iraqi forces. The resulting firefight causes an earth tremor where both sides fall into the ruins of a buried Sumerian temple. With all communication severed, our protagonists are trapped in a terrifying underworld they must navigate to escape, unaware that something ancient and evil has awakened in the shadows and has found a new prey to hunt.


With the setting being modern-day Iraq, and the recent conflict within the region, the tale follows soldiers on both sides as they uncover an ancient temple and a dark presence that may or may not feature fangs and claws and other monstrous things. Compared to the first two entries, House of Ashes is something of a departure, its tone is more Creature Feature than Supernatural Thriller.

“House of Ashes is a very different beast,” Game Director Will Doyle tells me. “A Little Hope was kind of a folk-horror, this is more action packed. And it draws from a different set of influences, we're looking at films like The Descent and Aliens, so it feels very different. The creatures themselves are horribly threatening, and there's more than one. The action involves our soldiers being in running gun-fights with monsters, and nearly always up against an overwhelming threat.”

“We're really trying to make you feel that the creature is out there,” Will adds. “That you feel its presence and that it’s threatening you at all times.”

An Ancient Threat, A Modern War 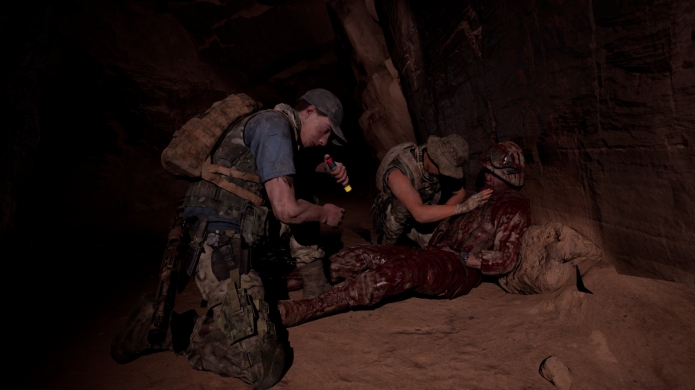 As a series you could point to history and legend as the connective tissue between each Dark Pictures tale, from Man of Medan’s World War II era ghost ship madness to the Salem Witch Trial folk horror of Little Hope. Being set in one of the most ancient locations in the world, in terms of human presence, House of Ashes goes all the way back to Sumerian legend and a time of strange rituals and beliefs.

“House of Ashes is a very different beast, more action packed. It draws from a different set of influences, we're looking at films like The Descent and Aliens.”


House of Ashes deals with the real-world tale of King Akkad, whose kingdom was supposedly cursed after he insulted the Gods. War, famine, and demonic invaders, Supermassive Games is telling its own heightened version of Sumerian history born from bits and pieces it has picked up.

“When it comes to the ancient time periods there's very little to base things on other than statues and carvings,” Will says. “There is a lot of material out there, but we've painted our own impression of what we think Akkad was like. Everything in House of Ashes is based on research. We went down to the British museum and looked at everything we could find there, went through books, the internet. It's been a fascinating journey in that respect, and really fun just to be able to delve into it all.”

The ancient war also ties into the modern story of the Iraq conflict, where the team poured a lot into researching the broader picture and the more human stories. With the characters you meet, and eventually take control of, being soldiers, there has been a concerted effort to make them feel as real and authentic as possible. 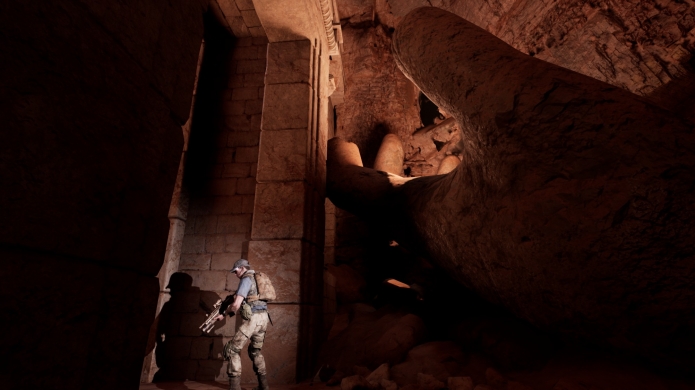 House of Ashes follows in the footsteps of previous entries by featuring highly detailed and realistic character models born from motion and face capture of real-world actors. With stories offering branching paths and fates undetermined it presents an interesting challenge in that pretty much every aspect of the game is worked out and planned ahead of production.

“Everything in House of Ashes is based on research. We went down to the British museum and looked at everything we could find there, went through books, the internet. It's been a fascinating journey in that respect, and really fun just to be able to delve into it all.”


“We have an early stage where we work out the ins and outs of the story, and we effectively do it all in software but it's kind of like a paper design,” Will explains. “This is where we're working out the branching narrative. It’s pretty complex because we have a story system where characters can live or die, so when we're designing, you're always having to consider who could be there, who could be dead at that time. After that we work with script writers, get some dialogue. It's only when we've kind of locked everything down, all the puzzles, all the ins and outs of the story, that we contemplate shooting actors.”

“We pride ourselves on creating these sorts of slick cinematic experiences, and the actors are a huge part of that because they’re character-based stories,” Will adds. “It's very tricky because of the branching narrative. When we’re shooting, our actors are going through all these different emotional states – and that’s difficult to manage. Demanding, and exhausting too. They have to not only maintain a performance but be mindful of the different states the character and story can go through.”

From there once the performances are shot, recorded, and captured what Will refers to as “the real development” begins. That is creating each scene, the environments, adding visual effects, physics, movement systems, the game basically.

The Dark Pictures Anthology: House of Ashes is the first entry in the series to feature optimisations for next-gen hardware -- that is PlayStation 5 and Xbox Series X. From the gameplay debut this can be seen in the pristine 4K presentation, the impressive detail across the environments and textures, and the lighting. This in particular has led to perhaps the biggest change to date, player control over the camera in what Supermassive refers to as “exploration” scenes.

“We pride ourselves on creating these sorts of slick cinematic experiences, and the actors are a huge part of that because they’re character-based stories.”


After wondering if more exploration might dilute the cinematic tension or pacing, Will was quick to point out that with the near-constant threat of the creature(s), using a flashlight and controlling the camera to peek around corners adds to the immersion and horror. “A big part of our game is exploring this ancient temple,” Will says. “It's a big place, and it changes from narrow claustrophobic environments to big open spaces. It's jumpier having that camera control. As you come up to corners, you're able to look around and check out those dark spaces the camera might not highlight.”

Of course cinematic sequences are highly scripted with branching paths offered through dialogue choices and Quick Time Events (QTEs). With the popularity of the series’ Movie Night mode, which allows up to five players in a single-room to control one character each, Supermassive has gotten quite a bit of varying feedback when tense sequences are driven by QTEs. Some find them easy, others way too hard. With House of Ashes, each player can set their own difficulty.

“We really do get these different opinions coming through relating to the difficulty,” Will admits. “So we want people to be able to tailor it to whatever their own skill set is. That said, it's never turning off the threat. There's always danger and the possibility of losing characters.”

And on that note with House of Ashes being the most action-packed Dark Picture to date, there are more unique and gruesome deaths by a considerable margin.

House of Ashes on track for release later this year, Supermassive isn’t anywhere near finished with the series. In fact it has multiple teams developing multiple Dark Pictures at any given moment.

“At the moment we are actively planning eight games -- so we're looking well ahead into the future.”


“We are developing games ahead of time,” Will explains. “While Man of Medan was being developed, I was working on this game. And then all the learnings from Medan filter across, same goes for Little Hope. We’ve identified all these different genres of horror and we have so many stories we want to tell. At the moment we are actively planning eight games -- so we're looking well ahead into the future.”

“The team is very agile too, and good at adapting and changing,” Will concludes, noting that each entry will bring something new to the table and feature more mature tech. “We place a lot of importance on community feedback too, plus we do a lot of user testing. We have cool tools for building our story systems and being able to change them as we go. It's a challenge, but we've got a team of enthusiastic and talented people.”
Tweet