We take Roll7's most ambitious skateboard outing for our own roll - how is it shaping up?
Hands-On with OlliOlli World - Full Video Preview!
Deathloop is Effortlessly Cool - Arkane Presents its Take on Rinse and Repeat Rogue Action
Post by KostaAndreadis @ 12:02am 20/05/21 | Comments
During a special preview event we sat down with Arkane Lyon as they took us through a tour of Blakreef Island and the many loops of Deathloop. And along the way, showcasing just what the studio does best. And why it’s shaping up to be another impressive PlayStation 5 exclusive. 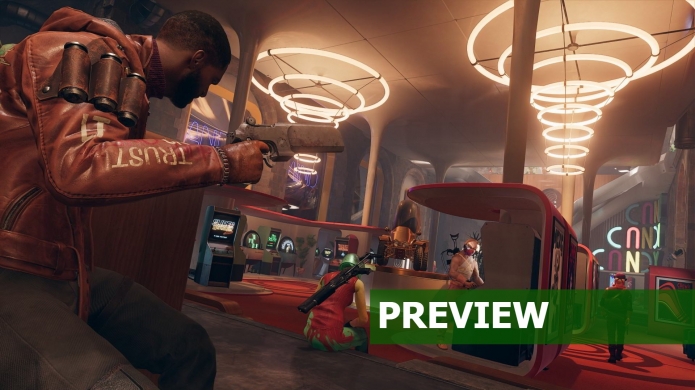 Arkane Lyon, the studio behind the acclaimed Dishonored series is known for making intricate, complex, yet ultimately intuitive first-person action-adventures. Experiences where style, action, and stealth go hand-in-hand and player choice can be as simple as deciding to go in guns blazing, use Force-like abilities, or sneak around with a knife in hand. Pointy bits extended and ready to be inserted into the backs of unsuspecting foes.

Each option not only servicing a style of play, but that of style itself. Arkane mechanics and presentation are one and the same, and this sense of cool carries across to level design. Where it’s not so much about the freedom to pick a direction and then go, but to see multiple paths laid out in front of you, figure out where they might lead, who might be behind a particular corner or door, and what you could do differently the next time around.

Dishonored 2 is the sort of game where replaying a level isn’t merely a case of trying again after being overrun or outgunned. More often than not it’s as simple as taking a wrong turn and messing up your idea of a perfect run. Press start, reload. Deathloop, the studio’s latest title, feels like the perfect distillation of this ideal - but one expanded and stretched and massaged into something new, familiar, and chock full of style.

Reliving the same day over and over as an assassin looking to escape “the loop” in a vibrant vintage vinyl-like world, where the brisk and kinetic action creates an atmosphere akin to John Wick by the way of Quentin Tarantino.

One look at the PlayStation 5 exclusive and yeah, ‘style’ could sum up just about every aspect of Arkane’s first next-gen outing. From the art direction that blends 1960s and 70s-inspired fashion and architecture with retro-modern weaponry, to the notion of stepping into the shoes of a cool-as-hell assassin looking to take out a string of targets on a mysterious island.

Revolvers, automatic weapons, blades. The cosmic by the way of sci-fi ‘Shift’ power that teleports protagonist Colt across rooftops. ‘Nexus’ which connects enemy minds with a telepathic string leading to a ‘kill one, kill them all’ scenario. The timeless Force Push goodness of ‘Havoc’. The music, the sound-design. It all looks wonderful.

But, reliving the same day over and over opens the door to a few questions.The most prominent being, well, what is Deathloop? 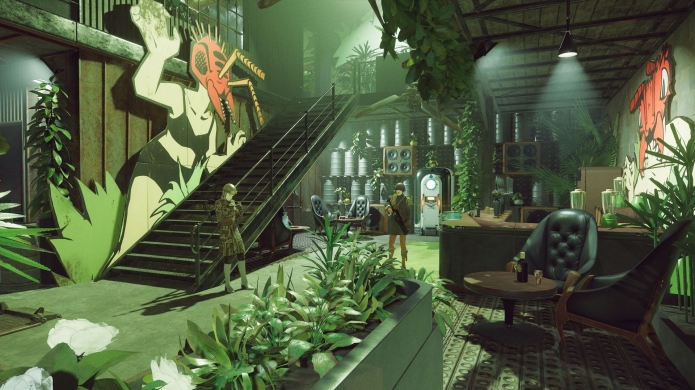 With the recent release, and success, of the first-party PlayStation 5 sci-fi shooter Returnal, the concept of the ‘rogue-lite’ is once again in the spotlight. Not that it ever left, last year’s excellent and transcendent Hades is still in the minds of many. Including ours. Not to mention Devolver Digital’s immensely fun Loop Hero from earlier this year.

A rogue-lite isn’t really a genre per-se, it’s more of a framework. A general blueprint that involves the player dying and then trying again, hopefully getting a little bit further each time.

... the brisk and kinetic action creates an atmosphere akin to John Wick by the way of Quentin Tarantino.


The ‘lite’ means that somewhere in there there’ll be character progression and growth, stuff that could carry over to the next run. Additional health, more fire-power, a new ability -- enough to one day make victory a certainty. Each “run” can vary in length, success, or even goal. Mechanics will vary, presentation too, but ultimately it's the interconnectedness of the systems and mechanics that incentivises.

Interconnectedness, systems, mechanics? Yeah, once you lay it out like that it almost sounds inevitable that Arkane would offer up its own spin on the Groundhog Day-like approach that is the rogue-lite. In Deathloop protagonist Cole wakes up on the shores of Blackreef beach, an event that kicks off each day, each run. And the only way to stop the time loop is to assassinate eight Visionaries, high-level targets, and break the cycle.

Why? How? Who? Well, with that old chestnut amnesia Colt will have to piece all of that together too.

On-screen messages (overlayed and placed within each environment in a very cool way) will prompt Colt about his immediate surroundings and the task at hand. With the goings on and layout of Blakreef Island remaining relatively unchanged across each loop, alongside the movements of key targets, it's here where the Arkane spin becomes apparent. Learning the layout, the multiple pathways, the sandbox -- it’s all integral to being able to put a stop to the time loop.

Unlike the implied difficulty that comes with rogue-like territory though, Deathloop seems to be fairly player-friendly.

Each of Blackreefs four distinct areas - The Complex, Updaam, Fristad Rock, and Karl’s Bay - can be accessed in any order. And at different times of the day - morning, noon, afternoon, and evening. No time limits are in place, and you can save between each shift in time. The objective isn’t to kill all targets before a timer reaches zero, you can take as long as you need. Even abilities like ‘Reprise’ add a clever checkpoint system where Colt can rewind time on death twice before the loop resets. Arkane has even stated that it’s entirely possible to close the loop without resetting it at all.

It’s An Honor to Come Together

The time-loop structure of Deathloop is intrinsically tied not only to your actions and the systems in play, but the narrative. As you learn more about the world, its inhabitants, and what the time loop is all about, so does Colt. Learning a key bit of info about a target will help you plan a potential attack, or find a literal key or passcode that might provide access to some goodies.

The time-loop structure of Deathloop is intrinsically tied not only to your action and the system in play, but the narrative. As you learn more about the world, its inhabitants, and what the time loop is all about, so does Colt.

It all adds a dose of organic progression that sits alongside more traditional progression, where a mysterious resource eventually allows weapons, trinkets (mods), and other powers to carry over across loops. And with Trinkets (that’s their actual naming) allowing Colt to double-jump, move around without making a sound, or all but eliminate fall damage - you’ll be able to create different loadouts to tackle each target and location using a different playstyle.

And speaking of targets, Julianna Blake - a rival assassin - can be player controlled or AI. This opt-in multiplayer adds a dose of player invasion to a loop, where being hunted by a real person adds a very distinct flavour. And it’s this aspect of Deathloop, alongside others, that has allowed Arkane to really stretch its imagination and ensure its taking full advantage of PlayStation 5 hardware.

Outside of the 4K 60fps presentation, which is a first for an Arkane console production, being able to track and manage two players alongside a sea of NPCs across a densely packed island is something that would have been reigned in if the team was targeting the PS4. As it was explained to us when we asked about the benefits of newer hardware, Arkane outlined that in Dishonored a sort of bubble existed around your character. Where everything outside of said ‘bubble’ wasn’t really tracked, including NPCs. In Deathloop, having two ‘bubbles’ effectively means that the simulation of an entire island region is always being tracked and managed by the engine. An ambitious undertaking made possible by PS5 hardware.

Focusing on Sony's newest console also means implementing DualSense features and social features like the Game Help system and Activities. Plus, near instant loading times. Deathloop is also headed to PC, but has been built with next-gen hardware in mind.

The Guns of Lyon 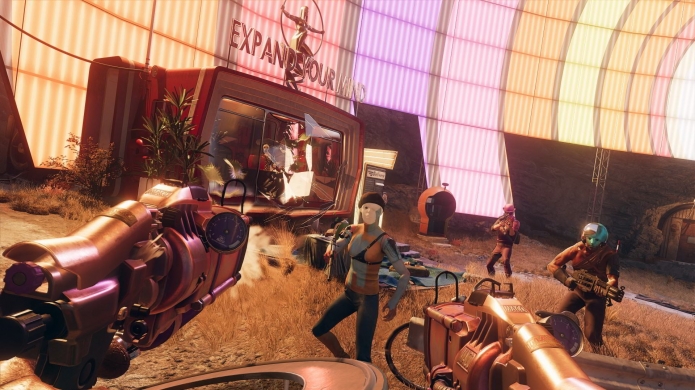 Outside of the immediate style and vibrancy of the art direction and aesthetic, which has an almost grindhouse meets classic Bond-era quality, it's the pace of Deathloop’s action and gunplay that feels like the biggest departure for the studio.

From rifles to shotguns to the ability to dual-wield SMGs, this isn’t the same stealth action of Dishonored. Gone is the victorian-era fantasy, in its place over-the-top violence with a Looney Tunes vibe. Case in point, Colt’s blade of choice is a somewhat comically oversized machete.

Julianna Blake - a rival assassin - can be player controlled or AI. This opt-in multiplayer adds a dose of player invasion to a loop, where being hunted by a real person adds a very distinct flavour.


There’s a playfulness you can see throughout Deathloop, from the underground facilities to the lavish parties. Blakreef Island might be dangerous but it’s also inviting and colourful. So then, what is Deathloop? Well, it’s shaping up to be Arkane’s next must-play release.

Deathloop is set to begin its first time loop on September 14, on PlayStation 5 and PC.
Read more about Deathloop on the game page - we've got the latest news, screenshots, videos, and more!
Tweet