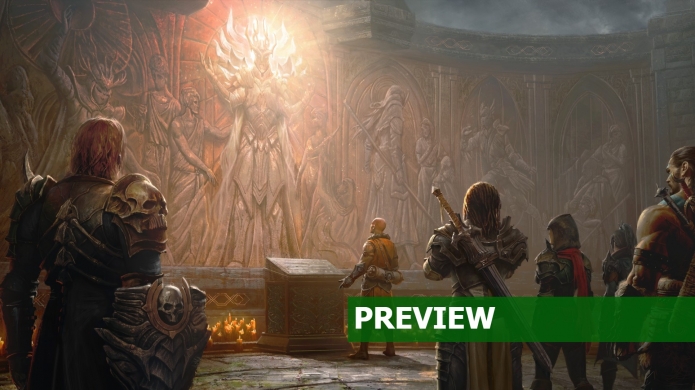 With another round of Alpha access kicking off locally for Diablo Immortal, Blizzard is expanding the content to include more regions to explore, a brand-new class in the form of the Crusader, more dungeon action, a level-cap increase, and access to a piece of faction-based endgame content called the Cycle of Strife.

And it’s here where Diablo Immortal showcases a very different identity to what we’ve seen previously, especially in the size and scope of the story that it will tell.

As per our hands-on preview the transition to mobile has been a smooth one for the series – in that the touch controls felt natural, and the Diablo III-style action and exploration worked well on a smart phone even when facing off against the Skeleton King or groups of mobs. Also, the whole bridging the gap between Diablo II and Diablo III felt like a great way to revisit Sanctuary with classic heroes like the Demon Hunter and Barbarian and get to see the art and style of D3 get a bit of a modern makeover.

Cycle of Strife though opens things up considerably, in terms of meaty endgame content that is a lot more involved than we were expecting and giving us a glimpse as to what the Immortal in Diablo Immortal is all about.

And it’s here where Diablo Immortal showcases a very different identity to what we’ve seen previously, especially in the size and scope of the story that it will tell.


What makes it so interesting, both in concept and how it all plays out, is that the story behind it pretty much is the setup.

Time to brush up on some Diablo history.

The Cycle of Strife, goes back quite a bit to a character known as Daedessa the Builder, a master crafter that like others was in the business of protecting Sanctuary from Demonic Invasion. Except that she created the Eternal Crown, a powerful bit of headwear that was bestowed onto her son Kion who then used it created a group called the Immortals. Keepers of Sanctuary, protecting everyone from the Burning hells.

But, what with the whole giving a dude a powerful artifact deal and watching that powerful doodad corrupt him stuff, Daedessa also charged her daughter Akeba with keeping tabs on Kion. To make sure that it didn’t all go to his head – even though we’re talking about a crown. From that a new group was born called the Shadows, a secret group of watchers who would continuously test the Immortals.


Eventually Akeba and the Shadows took the Eternal Crown and became the new, well, Immortals. From there a tug-of-war known as the Cycle of Strife emerged where Shadows and Immortals faced off to see which group would sit on the, you know, throne.

Okay so that brief bit of history should clue you in to how this might work for the large-scale multiplayer side of Diablo Immortal. A mix of PVE and PVP where a group vies to become the Immortals and hold that position. In terms of specifics each server will only have one group of Immortals, with a cap of 500 players – but there’ll be no cap for groups of Shadows and the various Dark Houses (sub-guilds within the Shadows), though Blizzard will be keeping an eye on things there.

To facilitate the Cycle a third faction is introduced called the Adventurers, which all players begin as. And really for those not interested in PVE group activities that bleeds into PVP, you could simply remain an Adventurer and keep playing the already extensive existing content in Immortal. As for the PVP side, 8v8 Battlegrounds will not only be included as a means where the top Immortals group face off against a similarly top group of Shadows (via a multi-stage battle called the Rite of Exile) but will also be open to all as a regular PVP mode.

[Cycle of Strife] is a fascinating mix of PVE and PVP where a group vies to become the Immortals and hold that position.


The team-based mode includes attack and defence with the defending side looking to hold out long enough before attackers escort idols to destroy the Ancient Heart power source.

As for the Immortals there are benefits to holding the crown, one of which is access to a 48-player raid called Kion’s Ordeal and the ability to give a server-wide buff to all non-Shadows offering better drop-rates in dungeons. Also, in Westmarch, the Wall of Honor will keep a history and record of the Immortals highlighting top players and lieutenants.

As for the Shadows it’s not all PVP based as there’s Contracts to complete and even the option to try and raid the Immortals’ vault housing treasure and goodies (which they can defend).

The reveal of the Cycle of Strife sits atop what we’ve already seen with Diablo Immortal in that it’s optional but a fascinating take on endgame content. On the more stat and loot side Blizzard let us know about a new Essence and Inherit system for Legendary Items where players can extract ‘Essences’ leading to a system ala Diablo III of re-rolling to perfect gear. Which sounds very cool, especially when paired with the ability to upgrade items via Immortal's crafting systems.

With all of the new stuff and the Cycle of Strife available in the current Alpha test, Blizzard is expecting this test-phase to run longer, around a month or so in order for the team to see groups of Shadows and Immortals emerge.

And the cycle to begin anew.
Read more about Diablo Immortal on the game page - we've got the latest news, screenshots, videos, and more!
Tweet