A great option for those looking for a dedicated headset for Xbox console gaming.
Xbox Wireless Headset Review - Affordable Wireless
It Takes Two - We Go Hands-On with the Charming New Co-op Game from Hazelight
Post by KostaAndreadis @ 03:00pm 03/03/21 | Comments
It Takes Two comes from the developer of A Way Out, but this time the setting is a fantastical world built around real-world struggles. It's fun, funny, and charming, and plays great too.

Co-op, which is the short form version of co-operative, refers mostly to value-add modes that let multiple players tackle narrative or otherwise single-player content. Of course the term is a lot broader than that, expands to include online play, arcade-like experiences, shooters where varying loot of varying colour drops onto the floor after a heated battle. PvE, horde modes, and so on.

From developer Hazelight, the studio behind the also co-op A Way Out, It Takes Two has been designed from the ground-up as a two-player experience. From the dynamic split-screen presentation to the mechanics and the story -- it’s co-op through and through. In terms of how it plays, well it’s something of a platformer with the finesse of Super Mario Odyssey and the art-style of a high end animated feature. It’s chock full of puzzles, traversal, and the story is presented in a fantastical and humorous style that also packs in underlying themes and dialogue that skirts the line between on-the-nose Cheeses of the World Fest 2021 and being genuinely sweet and funny. 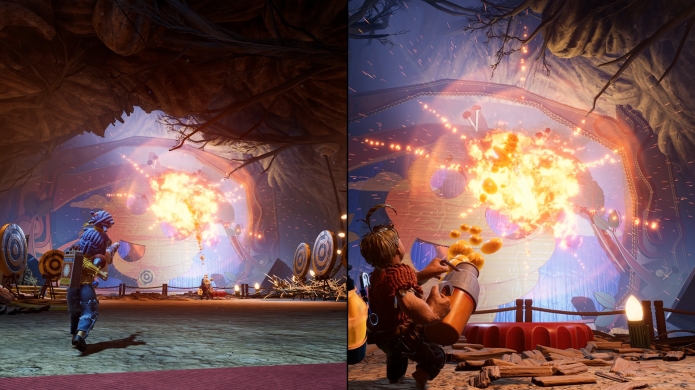 It Takes Two is also endlessly surprising and inventive, with set-pieces ranging from battling a sentient vacuum cleaner to overthrowing a dictatorial squirrel found on a backyard tree in a war against wasps.

And all of this comes from spending a couple of hours with the game ahead of its launch later this month.

From the dynamic split-screen presentation to the mechanics and the story -- it’s co-op through and through.


The story in It Takes Two revolves around a soon-to-be-divorced couple, Cody and May, forced into a fantastical Honey, I Shrunk The Kids scenario thanks to their precocious dark magic inclined daughter who doesn’t want them to split. That is, assuming the shrinking into dolls and going up against sentient vacuum cleaners falls under the Dark Arts section of magical incantations.

After the somewhat bland “real-world” intro cinematic where we get to hear the couple bicker about appointments and mundanity, it’s when Cody and May wake-up as handmade dolls that the inventiveness and warmth begins to shine through. We’re only talking about a minute or two of setup here so it’s not a big deal.

As a sucker of all things “they’ve been shrunk” (and body-swap movies too for that matter) getting to see larger than life household objects blend seamlessly into elaborate level-design and obstacles to overcome is, well, a lot of fun. It’s inviting too, in a way that feels more in tune with the co-op framework that is “working together” than Hazelight’s more serious A Way Out. A game that although impressive, felt more like a so-so crime drama modelled after popular action movies and 70s cinema.

That Super Mario Odyssey comparison from before? Yeah, a compliment and then some. Movement in It Takes Two is fluid -- triple-jumping, stomping, or otherwise moving delicately across pathways thin or not-so thin. It all feels effortless in that way any great platformer should. And much like the inventive set-pieces and fantastical elements found within, new challenges offer up new mechanics in a way that transcends devolving into mini-games. Like any great platformer the gameplay changes alongside the setting.

What gives it an air of something new and exciting though is just how well it incorporates both players in just about every aspect without feeling like it’s all scripted and linear in the sense of “It Takes Two… to flip this switch”. Even though that’s like the first puzzle. Exploration and experimentation is encouraged, played for laughs, and a core part of the fun. 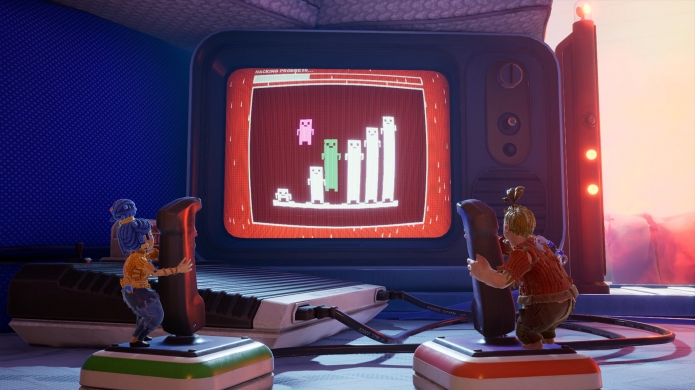 Paired with a smooth presentation (the PC build we played ran at a steady fps-clip and without any noticeable network lag) is It Takes Two’s visuals. Which, to keep the comparison train going, err on the side of Pixar-like in the best possible way. That is the characters you control and those you meet along the way (your sentient Love Book guide is, well, lively to say the least) are animated in a way that makes them feel alive. And on that note calling out the real-world intro sequence as somewhat bland is apt in how it would of course lack the imagination and overall warmth found from then on.

Movement in It Takes Two is fluid -- triple-jumping, stomping, or otherwise moving delicately across pathways thin or not-so thin. It all feels effortless in that way any great platformer should.


As a preview we only got to play the first couple of hours of the game, but in that time the puzzles and co-op design never felt like it got stuck in a groove or showed most of its cards. From puzzles to platforming to listening to Cody and May talk to each other, whilst ol’ Farrelly and I were also talking, It Takes Two is a lot of fun.

Compared to A Way Out it feels like the product of a team more assured in its decisions, how it wants to spin a narrative, whilst also being that thing we call a game. With Hazelight studio head Josef Faris, in typical Faris style, stating that he’d pay anyone $1,000 who finds themselves getting tired of the game -- odds are that the pacing, surprise, and overall fun we found across the first two hours or so will be there for the duration of its runtime. Which, as per another great interview with Josef over at Press-Start, is said to be about 14-hours all up -- "14 hours of madness".

It Takes Two releases March 26, 2021 for PlayStation 4, PlayStation 5, Xbox One, Xbox Series X and S. Online co-op only requires a single copy of the game and is playable via an included Friend Pass.
Read more about It Takes Two on the game page - we've got the latest news, screenshots, videos, and more!
Tweet