With GeForce RTX 30 Series and AMD RX 6000 Series graphics, and the dawn of HDMI 2.1 -- we’re bringing you our picks of the best gaming displays as announced at CES 2021.
The Best Gaming Displays Coming This Year
The Elder Scrolls Online Soundtrack Interview - A Musical Return to Skyrim
Post by KostaAndreadis @ 06:04pm 04/11/20 | Comments
We sit down with The Elder Scrolls Online composer Brad Derrick to talk about the Dark Heart of Skyrim and composing new music for one of the most iconic locations in all of gaming. 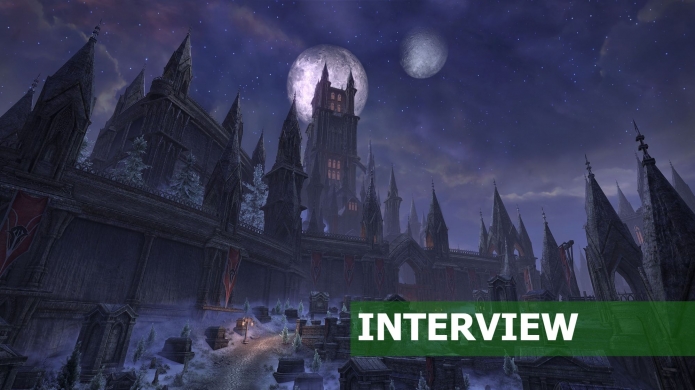 Skyrim is not only one of the most recognised and lauded videogames of all time, but home to fantastical sights and sounds familiar to players the world over. And when it comes to sound, the soundtrack to The Elder Scrolls V: Skyrim is an all-timer. From soaring orchestral movements, distinctive chants, and soothing ambient strings that would calm even the most startled giant. An epic musical journey on par with the game itself.

The Elder Scrolls Online which covers many more locations found throughout Tamriel covers similar musical ground, with style and tone shifting and changing to suit each new city, town, dungeon, or narrative beat. Also, it’s a canvas that is continuously evolving alongside the game itself - growing with each new expansion. This year, The Elder Scrolls Online has shifted its gaze towards Skyrim, with the Dark Heart of Skyrim yearlong narrative giving players the chance to experience or re-visit the iconic location.

And to find out just what goes into the music we hear as we quest and delve into places unknown. 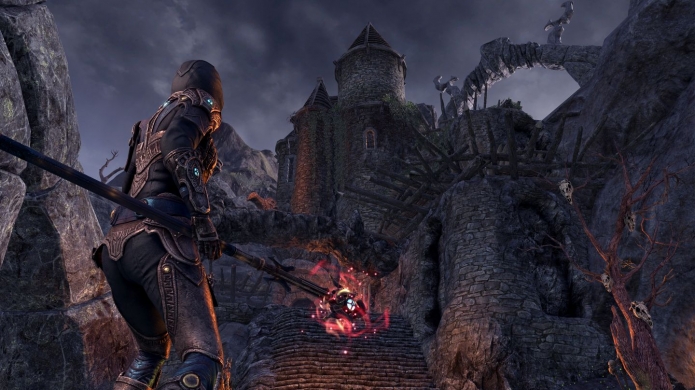 AusGamers: Skyrim has one of the most iconic soundtracks of all time, how did you approach those themes/motifs when scoring Greymoor?

Brad Derrick: From the very beginning, we knew that despite being set in Skyrim, this was not the "Skyrim" of The Elder Scrolls V. It had a different tone, a different identity. As such, the music also needed to support that and establish its own identity. That's just a fancy way of saying the music of Greymoor has no specific thematic ties to the music of TES V.

That being said, it was imperative that this score - like all scores for ESO - should still sit comfortably next to the entire canon of Elder Scrolls music… that it should sound like one piece of a larger whole. So while there are no literal musical connections to the music of the original Skyrim, there are broader stylistic ones - the expressive quality, haunting melodies, lush sonorities - elements that are the hallmarks of Elder Scrolls music.

"From the very beginning, we knew that despite being set in Skyrim, this was not the "Skyrim" of The Elder Scrolls V. It had a different tone, a different identity."


AusGamers: What instruments would you consider essential for Elder Scrolls Online and Skyrim in particular?

Brad Derrick: To me, it's not so much an instrument or collection of instruments, but rather a sound… a feeling. There's a kind of sweeping majesty to the music that exists while at the same time being quite intimate, almost gauzy and hazy. Those are two descriptives that might seem fundamentally at odds, but their marriage is what makes the music of Skyrim so special. There's a light touch, an emotional depth to even the most "epic" of the pieces that really sets it apart, makes it resonate with the listener, and heightens the experience of gameplay tenfold.

My goal with ESO's music has always been to be true to that aesthetic - to create something that feels personal yet larger than life, and integral to the gameplay experience. 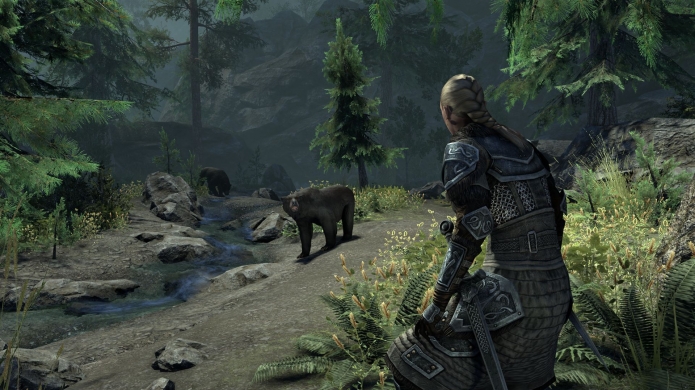 AusGamers: Elder Scrolls has a history of music that can go from bombastic one second to soothing the next. It’s very classical in that sense. When creating the music how do you interact with the game and development team to write new pieces?

Brad Derrick: At the earliest stages we have discussions about tone and style. Concept art and early drafts of the story also help get me pointed in the right direction. As development progresses, I spend a lot of time in games simply hopping around the world, playing the content, and having a look at things. This gives me a firsthand sense of the tone, which determines what the music should sound like.

This also gives me a sense of scope - how many pieces of music I'll need, and of what type. Regarding type, each update typically requires several lengthy background ambiences for various locations, short fanfares for dramatic moments or entering new spaces, perhaps a new title theme or combat music, etc. Lastly, I catalogue any integration-related issues that might arise - difficult musical transitions, sonic interactions with other in-game audio (eg bards), that sort of thing. Armed with this information, I can then build my "to-do" list.

AusGamers: Greymoor focused on darker elements of the franchise, Vampires and Werewolves. How did you approach writing new music for the story?

Brad Derrick: In the case of Greymoor, yes - the story is a bit more sinister in character, so musical choices were made to accentuate that. In the simplest sense, it's a question of finding the right combination of notes and sounds to evoke that mood. More clinically, it's a matter of the choices made with respect to instrumentation (what instruments I use), orchestration (how they're used), tonality ("pretty" vs "ugly" notes), intensity (the use of rhythm), etc.

In the music of Greymoor, low strings and brass are prevalent; high brass and woodwinds are absent. Rhythms are irregular and angular; there is a distinct lack of tinkly percussion. Tonality is chromatic and dissonant throughout. Melodies are more obscure and complex; less "hooky" or singable. This comes together to create a sense of unease to underscore the experience of Greymoor. 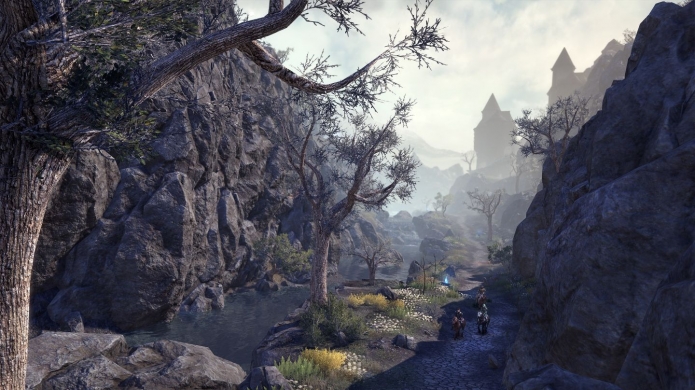 AusGamers: When writing at home what’s the process. What tools and synths do you use, is it analog, digital hardware, software?

Brad Derrick: I typically begin by casually fiddling about with new thematic material that feels appropriate, and sometimes dipping into the repository of unused half-finished ideas I've got lying around to see if any of those show promise. At the same time, I set about building a production template - my sonic palate - in Sonar or Cubase. This usually contains hundreds of different instruments that might prove fitting and useful in the creation process, allowing me to easily try out different ideas in different voices until I find what I'm looking for.

"Melodies are more obscure and complex; less "hooky" or singable. This comes together to create a sense of unease to underscore the experience of Greymoor."


Once my template is production-ready, I begin to develop my themes, fleshing them out from short melodic and harmonic fragments into fully realized and orchestrated compositions. In most cases, these then become demos for live production. Almost every part that can be replaced by live players will be, with the exception of certain types of percussion and sound design elements. Because of this, I have the luxury of not obsessing over what kinds of "orchestra in a box" instrument libraries I choose to use, or mastering the art of making them sound convincingly real. I have access to the real thing… what could be better!

AusGamers: Going from that setting to a full recording session how long is that process and when do you know you’re ready?

Brad Derrick: Ideally, I'm ready to record when my "to-do" list is done. But in practice, I'm only ever ready to record because I've completely run out of time! I typically work right up until the last possible minute, because with the power of today's audio tools there's always room for "improvement", the urge to polish just one last thing. If I didn't set a date that 100 people were counting on me to hit, I might work on some pieces forever.

Once I'm done and hand over the demos, there's 1-2 weeks of recording sessions with orchestra, choir, and various instrumental and vocal soloists. That's followed by a week of mixing, and then a week of mastering and integration of the finished music into the game. The time elapsed between writing the very first note to the final integration can be anywhere from 3-6 months, depending on the size of the score.
Read more about The Elder Scrolls Online on the game page - we've got the latest news, screenshots, videos, and more!
Tweet